The report covers comprehensive information on the market trends, value (US$ Mn) and volume (KT) competition projections, recent developments and dynamics in the global Mixed Xylene market for the period between 2018 and 2028.

The global Mixed Xylene market is projected to reach US$ 74.79 Bn over the forecast period, while growing at a CAGR of 7%, by value. Increasing demand for Paraxylene and rising consumption of mixed xylene as a solvent are some of the important factors expected push the demand for mixed xylene in the global market.

By the end of 2028, the isomer grade mixed xylene segment is anticipated to grow and become 1.98X of its size in 2018, by value. The segment will create absolute dollar opportunity created worth nearly US$ 31.09 Bn during the forecast period.

Mixed Xylene is used as a solvent in many industries, such as paints & coatings, pesticides, printing, rubber & leather, etc. It can be used in place of toluene where slower drying process is desired.

Mixed Xylene is a widely used solvent and is considered to be fit to be used as a solvent in paints, pesticides and other products due to its better adhesive properties.

The paints & coating market is continuously growing owing to increasing demand from automotive and construction industries. Additionally, growing demand for solvent grade mixed xylene from printing, rubber & leather industries will also give a push to the mixed xylene market over the forecast period.

The Solvent Grade Mixed Xylene segment is expected to grow at 6.5% CAGR, by value, during the forecast period. Growing demand for a better solvent material in different industries is projected to create new opportunities for mixed xylene to grow in the market.

In the mixed xylene market, prominent manufacturers are focusing on increasing their production capacity to increase their market share in the global mixed xylene market. For instance, capacity expansion and new plant start-ups, totaling at close to 2.4m tonne/year, were added to the Asia Pacific Mixed Xylene market during the last year.

Tonen General started a new 230,000 tonne/year Mixed Xylene recovery unit in Ichihara. Similarly, CNOOC Huayue started an aromatics unit with the capacity of 93,600 tonne/year for the production of mixed xylene and a joint venture between Lotte Chemical Corp and Hyundai Oilbank led to the formation of a new 1m tonne/year isomer-grade xylene facility.

Consumption and production of Mixed Xylene in China is projected to grow at a significant rate over the forecast period owing to increasing production of polyester products, such as polyethylene terephthalate (PET), films and fibres, in the country.

China is also a major exporter of polyester products in the Asia Pacific region. These factors is expected to create a robust foundation for the growth of the China Mixed Xylene Market during the forecast period. China is expected to grow and become 2.3x by the end of 2028.

Furthermore, well-established production and distribution facilities in the region and growing aromatics hydrocarbons consumption will create a healthy platform for the growth of the Mixed Xylene market in the Asia Pacific region. 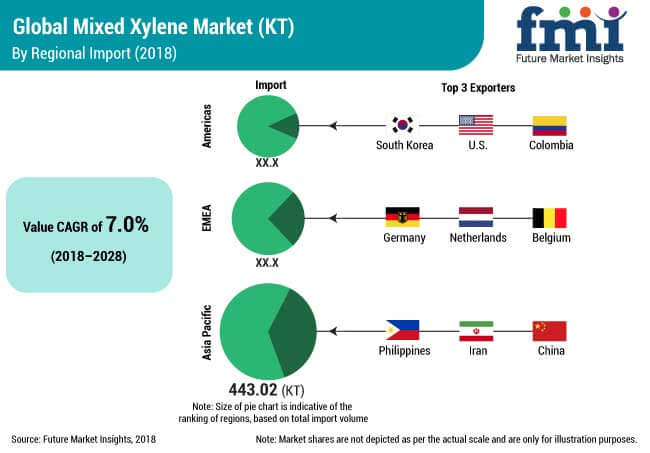 In recent years, the Mixed Xylene market has witnessed significant market developments from the competition perspective. Collaborations, acquisitions and expansion of the production capacity are some of the primary strategies adopted by key players to expand and sustain in the global Mixed Xylene market.