The market for niacin &niacinamide witnessed massive slowdown in its progress as a result of the spread of Covid-19 pandemic across the globe. But in the post covid world, with the changing eating habits and awareness concerning health benefits of various dietary supplements has been gradually increasing the consumption of niacin &niacinamide. As recovery commences in 2021, major players are recuperating their positions through production expansion, capacity utilizations and online selling in 2021 keeping in view the covid-19 norms.

The increasing number of end users  of niacin and niacinamide, especially the cosmeceutical industry, is driving the market for the key players. For instance, Mamaearth launched its Niacin Face Toner with Niacinamide& Witch Hazel for Acne and Open Pores which helps in tightening the pores without actually over drying the skin. The antioxidant properties offer an even toned complexion. It improves the overall skin texture and is also free of any harmful chemicals, mineral oils. In addition to this, Manmatters, a holistic wellness platform for men, launched REJUV Niacinamide Face Serum owing to its ability to fight hyperpigmentation. It uses free fatty acids to form a shield that protects your skin from losing moisture and appearing dull.

Europe and North America is predicted to rule the global market for niacin and niacinamides through 2030 owing to increasing numbers of end use industries and revenues. Rising incidences of downer cow syndrome (DCS) in dairy cattle, and increasing number of cases related to childhood obesity are prime factors expected to influence demand for niacin &niacinamide in the region. The Asia Pacific region is an emerging and potential market for the niacin and niacinamide.

Niacin is an organic compound, and considered to be one of the most essential nutrients for humans, as niacin deficiency causes pellagra. Niacinamide, an amide of niacin, is also referred to as nicotinic acid amide or nicotinamide. Niacin and niacinamide are integral components of Vitamin B3, and are often leveraged as supplements interchangeably.

These are commonly found in several food products such as meat, fish, beans, eggs, green vegetables, and yeast. Niacin and niacinamide are also sought in various vitamin supplements, particularly in vitamin B-complex supplements.

Niacin and Niacinamide have been approved by the U.S. Food and Drug Administration for treating patients with pellagra. Over the years, niacin has remained well-recognized for treating individuals with high cholesterols, however recent studies have showcased niacin to have adverse side effects when used to treat cholesterol levels.

In countries with malnutrition being one of the major concerns, regulatory bodies are setting up guidelines for food fortification including edible oil, salt, milk, wheat flour, and rice. Inclusion of niacin and niacinamide in majority of these food products is one of the aspects of food fortification in these countries, in order to prevent vitamin B3 deficiency. 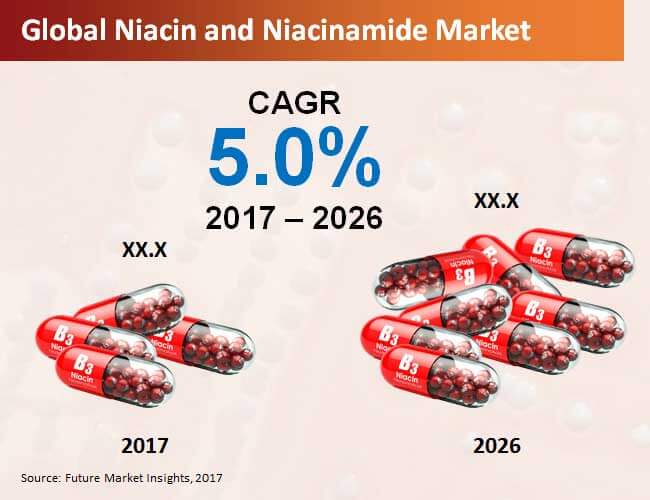 Deficiency of vitamin B3 leads to development of pellagra. Although pellagra is less prevalent in developed regions on the back of food fortification programs, certain countries in Africa such as Ethiopia, Zaire, and Malawi have a slew of reported cases related to pellagra. A health-conscious trend is fostering across the developed regions, with consumer awareness concerning health benefits of various dietary supplements such as niacin and niacinamide witnessing a rise. In addition, utilization if niacin in the cosmetics, particularly in skin care cosmetics, is gaining huge attraction owing to its ability of protecting skin cells from UV rays.

As projected by Future Market Insights (FMI) in its new research analysis, the global market for niacin and niacinamide will ride on a steady CAGR during the forecast period (2017-2026). Global sales of niacin & niacinamide are estimated to garner roughly US$ 1,500 Mn revenues by 2026-end.

Europe will continue to lead the global niacin and niacinamide market, in terms of revenues. Rising incidences of downer cow syndrome (DCS) in dairy cattle, and increasing number of cases related to childhood obesity are prime factors expected to influence demand for niacin & niacinamide in the region.

Physical inactivity and unhealthy consumption patterns are main reasons for overweight and obesity in young as well as elder population across European countries, which is becoming a major concern for the region’s healthcare sector. Niacin has potential to enhance adiposity, insulin sensitivity, glucose tolerance, and lipid profile, while modulating adiponectin level, thereby complementing obesity management effectively. Physicians in the region are highly recommending intake of vitamin B3 supplements, such as niacinamide, for tackling complications associated with obesity.

In addition, niacin has been closely linked with improving energy metabolism, and increasing glucose content in cows. Government as well as private institutes in the region are taking initiatives in spreading awareness about niacin’s benefits of preventing and treating DCS and improving milk production in cows among dairy producers.

Powder form of niacin and niacinamide will remain sought-after among consumers, with sales projected to account for over two-third revenue share of the market during 2017 to 2026