Over the last few years, application of plastics in electrical equipment and consumer electronics industries is increasing at a rapid pace. However, these equipment are flammable. Non-halogenated flame retardants are the ideal choice for putting off such fires.

Plastics play a significant role in the building and construction industry. Roofing, insulation, wall coverings, windows, piping, decks, fences, railing, and plastic house wrap are some of the applications of plastics in a typical house. Plastics are not only aesthetically pleasing, lightweight, and low cost but also very efficient. However, the only caveat here is that in case of fire, it works as an active fuel. So, in order to ensure safety of humans as well as of environment, adoption of non-halogenated flame retardant is expected to grow in the building & construction sector in the near future.

Although non-halogenated flame retardants are effective, they are plagued by certain performance and processing issues in plastics application, which affects physical and chemical characteristics of the end products. This hampers uptake of non-halogenated flame retardant as compared to their halogenated counterpart. However, major players are constantly focused towards investing in R&D activities to find a solution or workaround for this problem.

On the basis of product type, the non-halogenated flame retardant market is segmented into four segments, namely, metal oxide based, phosphorous based, nitrogen based and others. The others segment mainly includes silicon-, boron-, sulfur- and carbon-based flame retardants. In terms of market value, the phosphorous based segment is projected to exhibit the highest CAGR over the forecast period (2015–2025) and is also expected to create highest incremental $ opportunity between 2015 and 2025.

On the basis of end-use industry, the non-halogenated flame retardant market is segmented into four segments namely construction, electrical & electronics, automotive and others. By 2015 end, construction industry is expected to be the largest end-use segment. However, by the end of the forecast period, the segment is expected to lose its dominance to the electrical & electronics industry segment, in terms of market value.

On the basis of application, the non-halogenated flame retardant market is segmented into nine segments namely, polyolefin, epoxy, unsaturated polyester, rubber, polyvinyl chloride, polyurethane, styrenics, engineering thermoplastics (ETP) and others segment. Because of their growing use in across most industries, polyolefin segment is projected to remain the largest application segment by 2025, expanding at a significant growth rate over the forecast period. 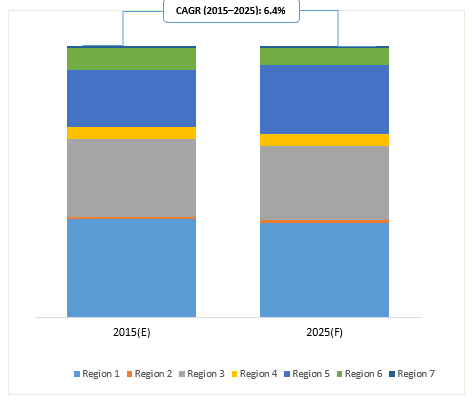