Petroleum jelly, also referred to as petrolatum, is derived by mixing mineral oils and waxes, and exists in a semi-solid form. It serves the purpose of a plasticizer on polypropylene and is compatible with most other plastics as well.

Composed of hydrocarbons, petroleum jelly has several superior properties such as high melting point, inflammability in its jelly form, and resistance to oxidation upon exposure to air, and insolubility in water.

Having procured the approval of the US Food and Drug Administration (FDA) for distribution as an over-the-counter (OTC) skin protectant, petroleum jelly's adoption in cosmetics and pharmaceuticals is expected to drive the growth of the market in the years to come.

Been in use for more than 100 years now, several studies and researches have discussed the health benefits associated with petroleum jelly, which have been impeling its consumption in the production of ointments, vaselines, and other cosmetics.

Owing to this thick nature, human skin cannot completely absorb petroleum jelly, thereby acting as a barrier to prevent the accumulation of dirt that causes damage to the skin. Likewise, it aids in maintaining the optimal levels of moisture and has gained prominence among people to avoid skin irritation on this premise.

Owing to its functionality as a natural barrier to the skin, the American Academy of Dermatology suggests using petroleum jelly in skin healing applications, thereby giving a tremendous boost to the overall growth of the market.

A study conducted in 2017 proved the effectiveness of petroleum jelly in preventing the incidence of eczema, a condition wherein patches of skin become inflamed, itchy, cracked, and rough.

The study involved the usage of 7 common moisturizers for 6 months and concluded that petroleum jelly is also cost-effective, exhibiting the highest cost-benefit ratio among the studied options.

On the back of these aforementioned facets, petroleum jelly finds remarkable adoption in the production of cosmetics, which is expected to remain a crucial application in the years to come.

The physical and chemical properties of petroleum jelly are the major factors driving adoption in industries such as leather, telecommunications, manufacturing, and marine, among others. Petroleum jelly is odorless and majorly colorless, with a pale yellow color when not highly distilled, and cannot be tasted or smelled in its pure form.

Backed by its inert nature, it does not react with other chemicals. This property makes it ideal and safe for adoption in the production of pharmaceutical products. Also, petroleum jelly is resistant and insoluble in water and many other chemicals. These properties make it a fitting solution in applications in which equipment needs resistance to rusting when it stays in contact with water and other chemicals for extended periods.

On a similar note, petroleum jelly is used in industries for moisturizing plastic, coating equipment such as metallic trinkets, non-stainless steel blades, and gun barrels to make them corrosion-proof before storing or transporting. It is also used to prevent loss of moisture, condition leather, and offer finishing to different kinds of wood.

Moreover, various variants of petroleum jelly such as pharmaceutical grade petroluem jelly and cosmetic grade petroluem jelly finds usage as a release agent for plaster molds, castings, and rubber across automotive and other manufacturing sectors. Likewise, petroleum jelly is used as an antifouling coating for motor boats and sailing yachts in the marine and automotive sectors due to its corrosion resistance properties.

For instance, Porsche owner's manual recommends coating wheels with petroleum jelly every three months to protect them from road salts and brake dust.

Side Effects: A Key Challenge

Although petroleum jelly has been established as a key material in cosmetics, certain factors are holding back the adoption to an extent. Cosmetic grade petroleum jelly could cause potential side effects such as allergies and infections.

The degree of intensity varies from person to person, with people vulnerable to infections being at high risk of bacterial and fungal infections on the skin. Also, inhalation of mineral oils is also known to cause aspiration pneumonia.

Since petroleum jelly is mineral oil, there is a risk of developing aspiration pneumonia when inhaled without the guidance of a medical professional. Therefore, consumers are wary of using petroluem jelly products, which has led to bottlenecks for market players.

Along similar lines, multiple studies have disputed the claim that petroleum jelly aids in healing the skin. A study in 2018 reported that petroleum jelly refrains the skin from performing its natural function, thereby slowing down the healing process and increasing the risk of infection.

Moreover, a 2013 study conducted on 141 women in the US found that women who use petroleum jelly products are at a higher risk of developing vaginal infections. Such findings are expected to limit the adoption to an extent.

On the other hand, macroeconomic factors such as the economic crisis in oil-producing nations in Africa and Latin America are limiting the production of mineral oils, subsequently limiting the trade to major economies such as Europe and North America. These factors are also posing a challenge to market growth.

East Asia is projected to remain the leading regional market for petroleum jelly through the assessment period. The region’s dominance is majorly attributed to the presence of thriving pharmaceutical and cosmetic sectors in China.

According to a recent study, eczema is one of the most prevalent skin diseases among children in China, accounting for 33% of the skin diseases diagnosed in the nation. The study also revealed that eczema requires the most frequent follow-ups, causing a burden to the children. Owing to its proven efficiency in healing eczema, petroleum jelly is anticipated to find remarkable adoption in the cosmetics and personal care sector.

Closely following East Asia is South Asia, which is poised to hold the second-largest share in the total market value. On the same lines of East Asia, the adoption of petroleum jelly in South Asia is concentrated in the pharmaceutical and cosmetic & personal care sectors.

In the recent past, nations such as Taiwan, India, Indonesia, and Vietnam have made remarkable progress on the industrial front. Since petroleum jelly offers the required lubrication and insulation at extreme temperatures, it is gaining traction in industrial applications, but pharmaceutical will remain the primary application.

Moreover, India is spending extensively on research and development of pharmaceuticals, which is expected to give a significant boost to the adoption.

Europe will remain a prominent region through the assessment period, primarily attributed to consumption in the production of skincare products. Europe, led by France, is the world's largest producer of cosmetics, thereby subsequently driving the demand for petroleum jelly. On the other hand, over 20% of the children in Europe are affected by eczema, which necessitates better personal care.

Moreover, governments of European nations emphasize on raising awareness regarding the disease since 4 out of 5 people develop complications such as asthma and other allergies, severely impacting the quality of life. On these lines, in 2018, the European Federation of Allergies and Airways Disease Prevention Associations (EFA) declared September 14 as European Atopic Eczema Awareness Day.

Such initiatives are expected to propel the demand for personal care products which, in turn, impels revenue to the petroleum jelly market.

Request a sample specific to the Europe market

By grade, the USP grade petroleum jelly is projected to remain the most sought out, capturing the lion's share in the global market value. The grade's dominance is majorly attributed to high purity, which makes it ideal for usage as a make-up cleanser, protectant against chafing, and in lip balm and skin creams. 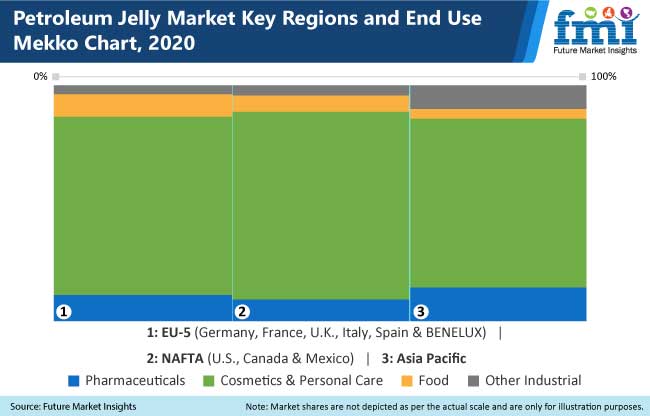 Likewise, when USP grade petroleum jelly is mixed with sugar or sea salt, it acts as a natural body scrub. Besides, its natural moisturizing properties ensure persistent adoption in the production of ointments in the pharmaceutical sector.

Backed by its fibrous and greasy structure coupled with the presence of mineral oils, the adoption of petroleum jelly is majorly concentrated in the cosmetics & personal sector. It is used in the production of several skin lotions, cosmetics, and hair products as a moisture reducing agent and grooming aid.

Furthermore, pharmaceuticals are expected to remain the second-largest end-use sector, where it is used to develop aids to burns, cuts, and scraps to keep the injured area moisturized during the healing phase.

Acquisitions and mergers have been identified as the key growth strategies adopted by established market players. Similarly, emerging players are focusing on the expansion of the product portfolio and are shifting towards online sales to expand their brand visibility and geographical presence.

On these lines, Godrej Consumer Products Limited, an Indian organization, completed the acquisition of Canon Chemicals, a major manufacturer and distributor of personal care and home care products based in Kenya, which is prominent for its petroleum jelly brand, Valon.