The global rail gangways market is mainly driven by the expanding high-speed rail network and a growing fleet of metro trains. The global market is anticipated to register a CAGR of 5.1% between 2022 and 2028.

Governments across the world are focusing on high investment to bolster large-scale transport infrastructure, such as high-speed rails and bullet trains, in order to make passenger transport faster.

Investments on railways will directly increase the demand for gangways and will boost the global rail gangway market across the globe. In India, the Ministry of Railway and Ministry of Urban Development have teamed up to achieve the smart city mission.

Also, In Spain, the International Union of Railways (UIC) and the Spanish rail infrastructure manager, ADIF, have come together to achieve the goal of ‘Smart Station in Smart Cities’ Moreover, rise in the research and development activities will create conducive environment for the growth of the rail gangways market during the forecast period.

Other factors expected to boost the global rail gangways market during the forecast period include supportive government schemes encouraging the development of high-speed train infrastructure, smart railways, and the integration of new technology in trams, and metro.

Overall, the global rail gangways market is expected to expand at a CAGR of around 4.9% by volume from 2022 to 2028 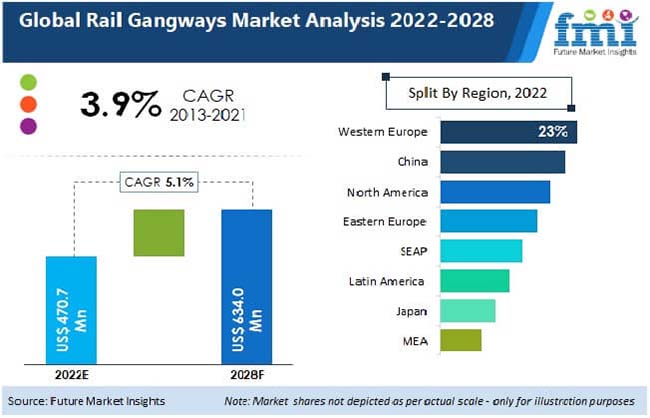 What are the Factors Driving Rail Gangway Market?

Rail gangways are used to provide passage for the passenger to travel from one bogie to another. With regards to safety concern, rail gangways manufacturer are installing gangway doors between the rail gangways in order to prevent passenger from any kind of accident such as fire. In case of an unprecedented fire outbreak, the gangways door is shut down through sliding mechanism, preventing the spread of fire from affected bogies to others.

The European Railway Industry is undergoing a rebirth, establishing itself as a model of cross-border collaboration and standardization. The European Commission is planning to improve long-distance and cross-border passenger rail services, with the goal of doubling high-speed train traffic and making public transportation trips more likely.

There are several initiatives undertaken by the Europe government to boost the growth of the railway industry which includes Fourth Railway Package and Shift2Rail initiative. The Fourth Railway Package is an ambitious initiative which aims to create a single European railway area into a standardised railway network operating on uniform lines, in order to create a cross-continental railway network which will in turn enhance European cohesion.

The shift2Rail is a relatively new initiative established by a European Joint Undertaking in 2014 which will oversee a programme of research and development for the railway sector. Thus, Europe is a prominent region for rail gangway market.

What Is the Impact of the COVID-19 Crisis on the Rail Gangways Market?

Lockdowns implemented across the world had a negative influence on the market. Obstacles have arisen as a result of limited production and transportation-related delays caused by travel restrictions. Furthermore, economic activities had come to a halt due to widespread lockdowns and mobility restrictions.

The global demand for rail gangways in 2020 has been influenced by the shutdown of manufacturing businesses throughout the world. The decline in transportation activity had a adverse impact on the rail industry sector.

What is the Germany Rail Gangway Market Demand Outlook?

Germany is projected to be dominate the market in Western Europe with a value share of 25% in 2022 and is expected to grow steadily through the course of the forecast period.

The key success factor for rail gangways market is the expanding rail infrastructure in Germany. Both rail operations and infrastructure are becoming more efficient and reliable through digitization.

In 2017, according to European Railway Performance Index, Germany was placed fourth among national European rail systems in terms of intensity of usage, quality of service, and safety. Furthermore, growing research activities, the existence of key players, and higher expenditures in product pipelines are contributing towards the rail gangways market growth in Germany.

How will the U.S. Rail Gangways Market Fare?

The U.S. is projected to account for approximately 82% of the North America rail gangways market in 2022. The U.S. railways operate with the longest rail route in the world. Freight transport accounts for around 80% of total rail network with only 35,000 km for passenger network.

Growing high-speed rail promotions in the U.S. are estimated to drive the demand for new rails. This, in turn, might positively impact the rail gangways market in U.S. Moreover, growing population and increasing number of office workers, in countries, are projected to drive the U.S. railway industry, thereby driving the rail gangways market during the forecast period

Where Does China in East Asia Rail Gangways Market?

In China, rail is considered to be the key mode of transportation with more than 90,000 km of conventional track and nearby 10,000 km of high speed rail network. Large scale investments in the rail sector in China has resulted in the expansion of the rail network.

The country has also recently announced its plan to expand the rail network to 175,000 km by the end of 2025. The plan also includes 38,000 km of high speed rail network. Moreover, high speed train projects from Harbin to Xiamen and Shenzen may also foster the market growth over the forecast period.

Which Product Type is highly Sought-after in the Rail Gangways Market?

Two piece gangways systems are generally used where passenger density is high, such as in North America, Europe, and China among other countries. In Japan and India, single piece gangways are mostly used.

Which Material Type is Preferred More in Rail Gangways Market?

On the basis of material type, the global rail gangways market is segmented into steel, aluminium, alloys, and composites. Of these, the aluminum segment is anticipated to dominate the market with more than two fifth of value share. In 2022, the demand for aluminum is expected to reach 163,223 Units. Increasing use of lightweight materials in metros and high-speed trains is anticipated to boost the demand in the aluminium segment in the coming years.

Over the past few years, acquisitions and expansion activities have emerged as key strategies adopted by market players to improve their competitive strength. Several key players are also focusing on improving efficiency of rail gangways.

In March 2019, The HÜBNER business announced its expansion plans in the U.S. Germany-based revealed its plan for building a new factory for manufacturing elastomer products within the U.S., after securing a major order to supply the New York City Subway with gangway systems in 2018

What is the current size of global rail gangways market?

What is the demand outlook for rail gangways market?

The rail gangways market has been estimated to exhibit 5.1% CAGR in terms of value between 2022 and 2028.

Who are the top players in the rail gangways market and what is their total share?

What is the U.S. rail gangway market outlook?

Which countries are the key consumers in the rail gangways market?

Germany, the U.S. and China, are the key consumers in the rail gangways market.

What are the key trends shaping the rail gangways market?

Increasing focus on strategic expansion and acquisitions among leading players is expected to shape the market in the coming years. Emergence of new players especially in Germany is also expected to impact the prevailing dynamics.