Bearings are mechanical elements that control the motion of the components they are attached to, allowing only the desired motion. In the operation of locomotives, due to the high torque involved, there is always a risk of a component moving away from its axis of rotation, the whole system.

Bearings are vital in operations in which the rotational force of certain objects has to be maintained within set limits and anything unusual beyond the expected movement can lead to disruption of operations.

Bearings are essential elements in railway operations to maintain the friction between moving parts in railway systems, ensuring various components stay intact without colliding or separating. Railway bearings are employed in various sites, such as the engine, wheels, interiors, and exteriors.

Although the components they connect at these sites vary, the functionality of railway bearings is to provide smooth motion of different components, which mounts into the smooth working of the overall system. Owing to its role in ensuring the stable operation of numerous elements, bearings have become a vital part of railway systems.

Increasing investments to improve railway infrastructure across the world, coupled with the development of advanced railway systems are expected to remain the key growth attributes of the global railway bearings market through the forecast period.

Governments across the world – in both emerging and developed countries - are significantly investing to develop railways infrastructure, thus creating demand for systems and parts used in freight and passenger trains. As production of railway systems is expected to behold an upsurge, this, in turn, is expected to propel the adoption of railway bearings.

For instance, in March 2020, the US allocated $248.5m in grants to fund several state and local railroad infrastructure projects under the Consolidated Rail Infrastructure and Safety Improvements (CRISI) Program. The objective of the funding is to improve the safety of railway networks and systems.

Since railway bearings indirectly influence the safety associated with railway networks, the funding is expected to give a boost to the market. The US freight rail network plays a crucial role in the economy of the nation by transporting various raw goods and finished products.

In 2017 alone, the US freight rail network contributed $219 billion in economic activity, indicating the enormous dependence on these freight rails. The freight rail network is majorly owned by private and the Association of American Railroads estimates that over US$ 26 Bn is spent annually on capital expenditures and maintenance expenses.

Likewise, in November 2019, the UK rail industry committed to introduce 8,000 new carriages per week from 2020 as part of a new investment program launched by the Rail Delivery Group (RDG). This will directly influence the demand for railway bearings to cater to the growing number of carriers.

Such investments will reflect in the adoption of several railway components, including railways bearings, thereby bestowing remunerative opportunities to market players.

Considering railway carriers are continually in motion, often experiencing harsh physical conditions such as rain, cold temperatures, and extreme heat, mechanical components used in them are expected to possess resistance to such intense physical conditions. This creates a huge demand for high-quality, long-lasting bearings.

On these lines, RCT (Rotating End Cap Tapered) roller bearings are gaining remarkable traction among end-users owing to their ability to operate under stressful environments. Roller bearings prevent deterioration and leakage of grease and act as a seal by refraining water or other foreign matter from entering into the systems. The global roller bearing market is quite established, and draws substantial investments from both public and private players.

Leveraging the growing demand, market players are focusing on developing bearings that can withstand such severe climatic conditions. Furthermore, manufacturers are also coating the bearings with ceramic or polymers to add the insulation properties and increase the safety factor.

Similarly, the availability of a wide range of roller and ball bearings, such as cylindrical, tapered, angular contact, four-point contact, electrically insulated, deep groove, etc. facilitates usage in different sites and applications, further impelling the revenue to the market.

In the recent past, a gradual shift towards magnetic levitation (maglev) railway networks has been observed. Contrary to conventional railways, maglev trains do not require wheels and axles to operate.

Instead, maglev technology uses two sets of magnets – one set to repel and push the train up off the track and make it levitate and the other set to move the train at a great speed. Since there is no direct contact between two moving objects, there is no need for components that minimize friction.

This eliminates the need for railway bearings, thus hindering the growth of the market to an extent. Although it is still in the early stages of development and a wide-scale adoption is quite distant in the future, several governments are exploring the concept of maglev trains to reduce the commuting time and enhance the overall rail transportation systems.

While Japan currently has maglev trains, many countries are jumping on to the bandwagon. In April 2020, China's Zhejiang provincial government announced plans to build a 400 km long maglev network costing US$ 14.1 Bn. The growing inclination towards maglev trains inversely impacts the demand for railway bearings.

Europe is expected to prevail as the largest regional market for railway bearings, capturing nearly 2/5th of global value. The region’s hegemony is attributed to the presence of the world’s largest railway network in the European Union, which subsequently necessitates several locomotive components, including railway bearings. 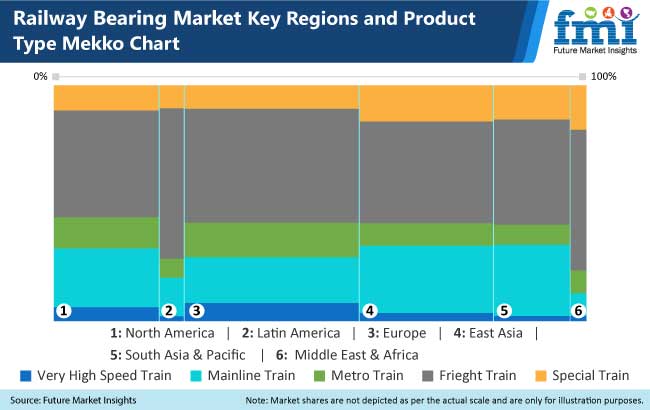 This will in turn propel the demand for new carriers and freights, acting as a remunerative growth opportunity to manufacturers of railway bearings. Along similar lines, in July 2020, the UK announced a £590 million investment to upgrade railway infrastructure in the Northern UK. Such investments will continue to drive demand for railways bearings in the region.

East Asia, forefronted by China, is poised to remain the second largest region, accounting for more than 1/5th of global value. Akin to Europe, the lucrativeness of the region is attributed to the availability of a vast railway network that continually necessitates locomotive parts during manufacturing and upgrades.

Furthermore, macroeconomic factors such as increasing investments in the expansion and development of railway infrastructure will positively influence the demand for railway bearings.  For instance, China invested over $US 46.3 Bn in the railway sector in the first half of 2020, to alleviate the production losses caused by the COVID-19 pandemic.

Moreover, the presence of a large private railway network in Japan and the ever-growing production of carriers in the region will continue to drive the demand for railway bearings in the region.

South Asia & Pacific - being home to emerging economies such as Singapore and China - is projected to remain a prominent region through the forecast period. The Indian railway network is the fourth largest network in the world and continues to draw investments for expansion and improvement.

In September 2020, the Indian Railway Ministry announced that it's exploring the idea of passenger trains run by private operators and expected over US$ 7.5 Bn in investment through 2025. Such initiatives will eventually reflect in the demand for railway bearings and positively influence the overall growth of the market.

By product type, roller bearings are projected to remain the most sought out products and will account for over 3/5th of market share by the end of the forecast period. High preference for these products is attributed to early penetration and the availability of multiple variants that suit diverse application-specific requirements.

By application, railway bearings find a majority of application in wheels, accounting for nearly half of global market value. The adoption of railway bearings in wheels is driven by the need to keep different plates of the wheels intact while the locomotive is in motion.

Based on train type, adoption in freight trains is expected to channel the majority of revenue, accounting for a share of more than 2/5th of global market value. The segment’s dominance is attributed to high spending by private operators to ensure the smooth operation of the systems, which in turn calls for timely upgradation of components.

On the basis of the sales channel, the aftermarket segment is expected to channel the majority of sales, accounting for nearly 2/3rd of value owing to growing spending by railway operators on aftermarket servicing activities.

Market players are focusing on developing products with innovative features such as increased durability, lightweight, low need for maintenance, and cost-efficient. To achieve the same, market players are directing their efforts towards research and development activities.

On these lines, In March 2020, NSK Ltd. developed low maintenance, high-reliability gearbox bearings which can be used for large and small gears. Likewise, in September 2020, NSK Ltd. announced that its bearings were being used in Japan's Shinkansen bullet train.

Moreover, market players are partnering with other players to improve their visibility and enhance distribution capabilities. Key developments on this premise include a partnership between Russia based AB SKF with Siemens to distribute its wireless bearing products in 2018.

What is the global railway bearing market size?

The global railway bearings market is expected to reach a valuation of US$ 4.5 Bn by 2030.

Which is the largest regional market for railway bearings?

Which are the top companies in the railway bearings market?

Which sales channel is expected to channel the majority of revenue to the railway bearings market?

The aftermarket segment is expected to channel the majority of revenue to the railway bearings market through the forecast period.

What is the outlook on the railway bearings market?

The growth of the railway bearings market is primarily attributed to the ascending demand for high-reliability and low-maintenance bearings.