[209 Pages Report] The global railway fishplate market is estimated to be worth around US$ 4.83 Bn in 2022. With increasing investments in the railway infrastructure across the world, the overall market is projected to expand at a moderate CAGR of 3.4% between 2022 and 2029, reaching a valuation of US$ 5.89 Bn by 2028.

Regionally, Europe will continue to dominate the global railway fishplate market, accounting for a major share of 34.4% in 2022. Growth in the region is attributed to the expanding railway infrastructure, presence of leading market players and increasing government investments.

Expansion of the railway infrastructure across the world, growing need for improving passenger safety, increasing government support for building smart cities and rising penetration of metro stations in developing regions are some of the major factors driving the global railway fishplates market.

Railway fishplate is an essential railway fastener used for connecting any two rail tracks. It consists of a metal bar which is bolted to the ends of two rail tracks for connecting them. They offer various features, such as corrosion resistance, superior thermal stability and insulation which makes them ideal for railway track fittings.

Railway transportation has become one of the most essential means of transport for both passenger and goods. Rapidly rising population and traffic congestions are prompting governments to introduce new railroad lines, which in turn is boosting sales in the market.

Over the last few decades, there has been a significant rise in rail accidents worldwide. To minimize this damage and eradicate the threat of accidents, operators are focusing in the improvement and maintenance of railroads and various other components. This is anticipated to create growth prospects for railway fishplates market.

In addition to this, continuous periodic maintenance of rail networks, easy installation process and the introduction of composite materials for the production of railway fishplates are expected to complement the growth of the market over the assessment period.

Backed by the aforementioned factors, the railway fishplate market is set to expand 1.2X through 2028. 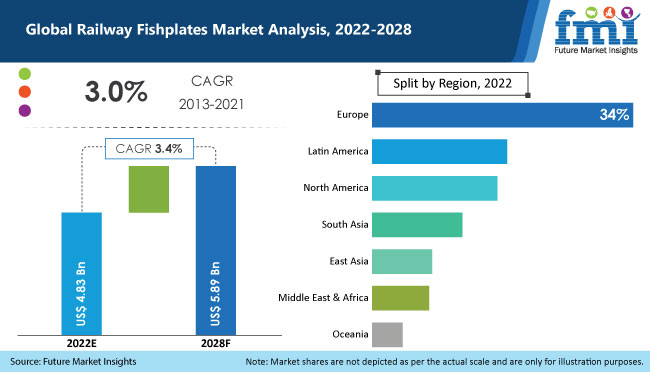 What is the Impact of Ongoing Railway Projects on the Railway Fishplates Market?

Spurred by increasing population, rapid industrialization, and growing need for transporting heavy goods across distant locations, railway transportation has gained huge traction across the world. It has become a primary mode of transportation for freight and passengers.

Governments worldwide are heavily investing in developing railway infrastructures and increasing the number of trains. Metros and railbuses are growing in popularity.

New projects are being launched in both developed and developing countries to expand the railway transportation industry. For instance, in October 2021 Indian Railways announced a plan to establish 500 multi-modal cargo terminals under the ‘PM GatiShakti’ programme.

In October 2021, India and Nepal signed a MoU (Memorandum of Understanding), to connect Kathmandu and the Indian border town, Raxaul, through a proposal of 3.15 billion railway line project. Similarly in December 2021, The UAE government announced the launch of the UAE Railways Programme, which falls under the ‘Projects of the 50’.

In March 2020, The U.S. allocated $248.5 million in grants to fund several state and local railroad infrastructure projects. Amid such developments and investments, sales of railway fishplates are projected to rise at a considerable pace over the forecast period.

What is Driving the U.K. Railway Fishplate Market?

The U.K. is emerging as one of the fastest growing markets for railway fishplates across Europe. Growth in the country is attributed to the presence of leading market players, high railway track network density and growing popularity of trams for local transport.

Railway is one of the most preferred means of transportation in the U.K. Various efforts and investments have been made by the government and private companies to improve connectivity across all corners of the U.K. This is expected to continue boosting demand for railway fishplates in the country.

Similarly, increasing preference for trains for travelling across the country is compelling the government to develop better infrastructure and introduce more fast speed trains. According to the Rail Industry Finance (UK) report, total rail industry expenditure in 2019-20 was £20.2bn, a 4.0% increase from 2018- 19.

Major upgrades are being done to bring a more modern and reliable railway infrastructure, and to increase the capacity for more trains to run in the future. Owing to these investments, a market share of 34.4% has been predicted for Europe railway fishplate market, led by the U.K.

What is the Growth Projection for the U.S. Railway Fishplates Market?

Freight railroads play a key role in the U.S. economy especially for moving export and import containers as well as for shipment of oil and coal. Majority of the heavy products across the country are transported through trains.

According to the U.S Department of Transportation, with around 140,000 route miles, the U.S freight rail network continues to remain the largest, safety and most cost-efficient freight system in the world. The freight rail industry stood around US$ 80 billion in the U.S. This is one of the major factors driving the railway fishplates market in the U.S.

In addition to this, rising number of rail accidents is prompting the government and other companies to employ modern signaling systems in the railway infrastructure. Demand for insulating rail joints is one the rise.

Driven by this, North America railway fishplate market is projected to account for 16.5% of the total market share.

Why is India Emerging as an Attractive Market for Railway Fishplates?

The Indian railway fishplates market is experiencing strong growth on the back of expanding railway sector, increasing government investments, rapid urbanization, and the presence of leading domestic and international players.

India has the fourth largest railway system in the world. Railway forms the backbone of Indian economy. According to the Indian Brand Equity Foundation (IBEF), Indian railway had around 13,169 passenger trains and 8,479 freight trains in 2019-2020. Furthermore, in 2020 Indian railways gross revenue reached around US$ 24.78 billion in 2020.

Various railway projects are being launched for improving the connectivity between states. For instance, in 2021-2022, Railway Ministry of India identified 56 projects in various railway zones that will complete within a short span of time.

Increasing penetration of modern heavy rail systems along with increasing efforts to improve the passenger safety is anticipated to further boost the growth of railway fishplates market in India during the forecast period.

As per FMI, South Asia railway fishplate market, spearheaded by India is set to account for a share of 11.9% by 2022.

Why is the Demand for Insulated Rail Joints Rising?

Demand for insulated rail joints segment is mostly driven by high-speed rails and railway signaling systems. Insulated rail joints are being widely used in the rail network for the identification of trains within a track circuit. These joints provide riding comfort, reduce noise and are ideal for all climatic conditions and environment.

Rising adoption of insulated rail joints in rails is anticipated to boost the growth of railway fishplates market through 2028.

Increasing passenger count, along with growing need for effective transport options for heacy cargo are compelling  countries to develop the infrastructure for heavy rails. Heavy rail is generally ideal for long distance transportation. Increasing investments by the governments to expand the heavy rail infrastructure is anticipated to boost the sales of railway fishplates.

Moreover, increasing penetration of modern heavy rail system (metro) across both developed and developing countries will continue to boost the growth in the railway fishplates.

Leading players operating in railway fishplates market are constantly focusing on introducing products with superior properties. Moreover, they are establishing partnerships and contracts with clients and companies to increase their sales. For instance:

What is the current railway fishplate market valuation?

The railway fishplate market is estimated to be worth around US$ 4.83 Bn in 2022.

What is the demand outlook for railway fishplate market?

As per FMI, the railway fishplate market is forecast to register a steady CAGR of 3.4% between 2022 and 2028

At what rate did the railway fishplate market grow between 2013 and 2021?

What are the key trends shaping the railway fishplate market?

Increasing investments in railway infrastructure development, rising need for improving passenger safety and growth of import-export business are some of the key trends shaping the market growth.

What will be the demand outlook for North America railway fishplate market?

What is the market share of Europe railway fishplate market?

Who are the leading players in railway fishplate market?