Antioxidants can be described as ingredients that extend the shelf life of food products & beverages by providing them protection against corrosion caused by oxidation. Due to their functionality, antioxidants are also known as shelf-life extenders. Antioxidants are used as an food additive , cosmetics and animal feed manufacturing. Antioxidants also provide an answer to the problem of skin ageing. Cosmetics with antioxidants as active ingredients protect cell membranes and inhibit the oxidation process by neutralising toxic oxygen molecules and free radicals.

The global economic slowdown had low impact on the global antioxidants market and the market for antioxidants is expected to continue to witness growth during the forecast period. However, changing eating patterns are affecting the market growth regionally, due to changing diet patterns, urbanization and population, and economic growth. The global meat market, worldwide, was valued at US$ 39.2 Trn in 2012 and US$ 40.9 Trn in 2014.

Pork meat has been accounting for the largest share in the overall global meat market since the last four years. However, the market for chicken meat has experienced high growth over the last four years. Rising population is boosting the growth of the meat market worldwide. The above table depicts the population trends in the world‘s largest and fastest growing economies, where the demand for feed products is expected to rise rapidly with the rise in population.

The global population is expected to reach more than 7.99 Bn by 2025, from 6.9 Bn in 2011. Due to growing life expectancy and robust growth of the agriculture sector, the demand for feed antioxidants in the global meat industry is expected to grow during the forecast period. India and Brazil are amongst the world‘s fast-growing economies and are witnessing a continuous increase in their per capita income. This may cause a standard shift in dietary preferences in both the countries.

However, meat consumption patterns are expected to vary across different parts of the world due to cultural, religious and other consumer preference factors. Owing to these factors, the demand for feed antioxidants is expected to grow, in turn, driving the growth of the overall antioxidants market in the coming years.

Antioxidants are used in food products to preserve their nutrients, flavour and freshness, thereby preventing food wastage and extending their overall shelf life. In many situations, two or more antioxidants are used in a food product to enhance their food quality protection standards. Preservatives are also used in commercial products to preserve their freshness for a longer time and to keep them free from bacteria. Antioxidants help prevent oxidation of food containing fat or oil and thereby, prevent it from going rancid.

Besides, they prevent the browning of vegetables, cut fruit and fruit juices and increase their shelf life. For example, vitamin C, which is also known as ascorbic acid, helps recycle vitamin E. Ascorbates, such as vitamin C, help to remove oxygen through the self-oxidation process.

For example, monosodium glutamate is used in processed foods, such as soups, sausages and sauces. Owing to these advantages, the demand for antioxidants is expected to observe a surge globally, especially from the packaged food industry.

Aging is defined as deterioration of physiological functions in organisms. As people get older, their skin loses its defence against external weather due to oxygen deficiency. Increasing pollution is also a major inducer of premature aging as it results in the activation of metalloproteinases that disintegrates collagen. Antioxidants reduce skin aging by dampening free radical formation in the skin.

Antioxidants offer protection to cell membranes and prevent the oxidation process by neutralising toxic oxygen molecules and free radicals. There are some proteins present in connective tissues, namely collagen, and elastin, which help keep the skin tight and fresh.

As people get older, the production of these protein elements becomes slow; this leads to wrinkles and sagging of skin. Antioxidants help maintain the elasticity of skin by protecting it from free radical attacks. Chain breaking antioxidants, including uric acid, vitamin E, vitamin A, vitamin C and beta-carotene, help to prevent the oxidation chain reaction by terminating free radicals. Antioxidants play an important role in providing anti-aging skin support process by protecting the skin from the toxic effects of free radicals.

Besides, vitamin C and glutathione, the most widely used antioxidants, protect the cytoplasm of the cells. Apart from this, antioxidants are also present in cosmetics, such as alpha-tocopherol acetate and tocopherol. These antioxidants help to substantially increase the vitamin E content of the skin.

Antioxidants are known for their skin care benefits. For instance, they reduce singlet oxygen and prevent damage to or death of cells. Owing to these factors, the use of antioxidants is expected to increase over the forecast period.

The global antioxidants market report covers four major regions, namely North America, Europe, Asia-Pacific and Rest of the World. Asia Pacific was the largest market and accounted for 31.90% of the overall market in 2014. The region’s dominance can be attributed to growing demand for health and dietary supplements in Asia Pacific. Moreover, the growth in demand for packaged food products, in turn, is also contributing to the increased demand for antioxidants. 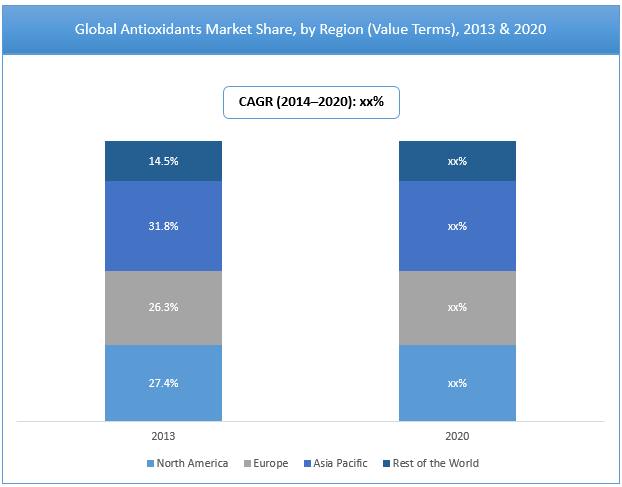