With the rising prevalence of nutritional deficiencies, particularly in the developing world, food fortification programmes have taken shape in the form of public health initiatives. Statistical studies have proven that iodine fortification has decreased the incidence of goitre by almost 90%.

Similarly, milk fortified with Vitamin D can reduce the occurrence of rickets in young children, and the fortification of flour, cereal, and bread with Vitamin B can effectively tackle the nutritional deficiencies of Vitamin B. Product manufacturers actively involved in the fortified foods market are experimenting with new technologies that prevent the degradation of Vitamin D from refrigeration and UV light.

Discretionary fortification nothing but a marketing gimmick

Increased fortified food intake, especially amongst a non-target audience could possibly lead to nutrient intake above the recommended or permissible limit. Excessive intake of fortified products can be one of the reasons for indigestion or genomic alteration.

The highest CAGR is anticipated to be in the basic foods segment as milk and milk products are rich in calcium and are perfect to combat vitamin D and calcium deficiency across the globe. Therefore, fortification of basic foods is far more critical than that of processed foods in the fortified foods market. Yoghurt fortification is poised to witness a robust CAGR of 6.7% from 2019-2027, meaning that key stakeholders in the fortified foods market would do well to target this segment with customised strategies.

Fortification measures could reduce the economic burden of iron deficiency

A study conducted in Brazil showed that the lost productivity on account of iron deficiency in the country cost US$ 4 per capita i.e. 9% of the national GDP. A sustainable fortification initiative implemented properly would cost much less than avoidable losses by way of anaemia and needs to be a priority for both regional as well as national governments in countries where this poses a problem.

It is a closely fought battle between processed foods and basic foods in the North America fortified foods market with the former leading by a sliver. However, this is anticipated to flip by the end of the forecast period with basic foods accounting for about 51% market share by the end of 2027.

Milk and milk products fortified with Vitamin D are critical in the North America fortified foods market and the basic foods segment is expected to push past US$ 20 Bn by the end of the decade long study. Margarine fortification is also gaining substantial traction and companies actively involved in the fortified foods market would do well to take this into cognizance. 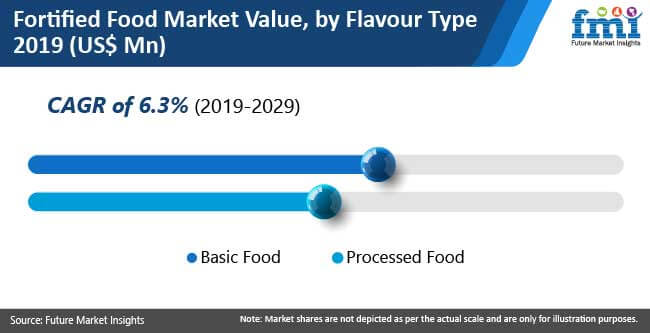 At what rate of growth will the fortified food market rise?

Which is the leading segment in fortified food market by raw material?

In terms of raw material, the flour segment is expected to cross US$ 68 Bn by the end of 2027

Which region will dominate the fortified food market?

APEJ represents more than a third of the global fortified food market and is expected to grow considerably through the course the forecast period.

What are the chief factors driving market?

Rising prevalence of nutritional deficiencies witnessed around the world will fuel the demand for fortified foods.

Which segment based on technology will report the highest CAGR over the forecast period?

Key players in the market have acknowledge how crucial drying and extrusion technologies are to production. As a result of this, the drying technology segment will exhibit impressive growth over the forecast period.