The dairy industry is considered to be a promising industry among wide range of applications in the food & beverage sector. Although dairy products serve as excellent resources of essential nutrients, several processing methods including ultra-heat treatment, spray drying, pasteurization, and heating lead to loss of specific nutrients. Replenishing lost nutrients is therefore imperative, and fortification of dairy products has emerged as an effective method for achieving this purpose.

Dairy products are consumed by most people for various purposes, and are emerging as effective vehicles for fortification, thereby ensuring fortificants reach uniformly among the population worldwide. According to WHO, several school children are afflicted with deficiency of vitamin A. Vitamin A-fortified dairy products such as milk hold immense potential to curtail this deficiency. In addition, dairy products fortified with vitamin D helps in improving absorption rate of calcium and maintaining calcium level in blood. Health-conscious consumers have now commenced consumption of yogurts as healthier alternatives to dairy products such as ice cream and milkshakes that are rich in calories. Increasing penetration of the fortification technology in yogurt has further propelled sales of functional food products that play a pivotal role.

Countries across the globe are understanding the importance and accepting the concept of fortifying dairy products, which in turn is expected to boost sales of these products. However relatively higher cost of fortified dairy products than their non-fortified counterparts is likely to constrain their adoption to a certain extent. 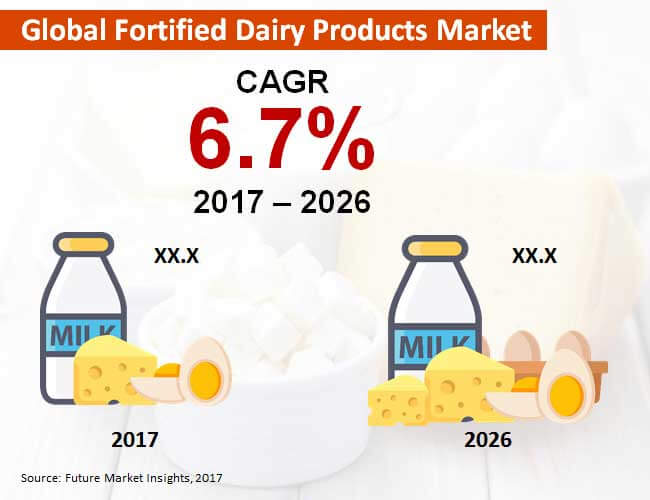 Asia-Pacific excluding Japan (APEJ) will continue latching on to its position of being the dominant region in the global fortified dairy products market, mainly driven by high demand from its emerging countries such as India and China. The flourishing food industry along with surging consumer awareness and growing penetration of food fortification technology will influenced development and demand for fortified food products in the region.

Europe and North America will also prevail as remunerative regions for the market growth, owing to soaring demand for healthy dietary supplements among consumers in the region, who are becoming increasingly health-conscious.

Milk has prevailed as the largest consumed dairy product globally, and is the prime source for micronutrients that include potassium, magnesium, calcium and vitamin D. Milk powder and formula are considered to be a step above than milk in offering these nutrients while retaining the effectiveness over time, and have gained immense traction among the global population.

Fortified milk powder and formula therefore is expected to remain the leading revenue contributor to the market, based on product type. Flavored milk has also gained huge consumer interest on the back of their taste and flavor, and are also expected to remain a lucrative product in the market.

Key Research Findings from the Report