In its new study, ESOMAR-certified market research and consulting firm Future Market Insights (FMI) offers insights about key factors driving demand for downhole tractor. The report tracks the global sales of downhole tractor in 20+ high-growth markets, along with analyzing the impact COVID-19 has had on the end use industries in general, and downhole tractor in particular.

What is the Future Outlook for Downhole Tractors Market in Comparison to Historical Pattern of Growth?

Till date there are approximately 5,000 subsea wells distributed all over the globe, along with many more being drilled each day. Several wells are more than a decade old and hence requires maintenance via various well intervention techniques. Well intervention offers the solution to extend the productive life of wells and for the repair of underperforming and damaged wells.

Oil and gas companies around the world are continuously developing new functionalities and developments for downhole tractors to be used in a wide range of applications. Production logging, fishing, and seismology are some of the technologies that can be integrated with a downhole tractor to be used in either deviated or horizontal well bores.

Well intervention including production logging and pipe inspection and maintenance and Seismology can be considered as a major application of downhole tractors. They also have proven to be efficient, light, agile, and an economic solution against conventional techniques. Downhole tractors provide various advantages over issues such as gravity feeds or slickline deployment, or large and complex designs of coiled tubing.

Seismology and well logging tools integrated with downhole tractors provide new opportunities for explorations. New investments in global oil and gas projects are likely to give impetus to the market. Increasing oil production investments in the offshore areas of UK and Norway as well as Kazakhstan and Russia is expected to create opportunities for the downhole tractor market.

The demand for downhole tractor is rising and the well intervention application segment is gaining momentum in countries such as the U.S. and countries in North Africa such as Sudan, Libya and Algeria. Owing to the ongoing crisis caused by COVID-19 pandemic, production and supply chain activities have seen a minor slump yet the consumption will improve with the economic recovery post the containment of the pandemic.

The COVID-19 pandemic has caused severe impact on the global economy at various levels and the impact is felt by the energy industry as well.  Considering this, growth of the market also is projected to be affected by the COVID-19 pandemic crisis owing to project delays and cancellations. With a number of end users affected in regions like North America, Europe and Asia-Pacific, the supply and shortage in demand are expected to result in a significant drop in Y-O-Y growth yet FMI expects global downhole tractor market to grow at 4.9% CAGR through 2031.

What is the Commercial Potential of Downhole Tractors?

The demand for downhole tractor is increasing due to its higher adoption rate and increasing applications in production logging and pipe inspection and cleaning. These factors are helping the market gain momentum in countries such as the U.S. and in the MENA region. The demand for 500 to 1,000 lbf pull force downhole tractor for onshore applications is considerably high in the Americas, East Asia, and the Middle East and Africa, whereas higher pull forces are preferred in Europe and South Asia and Pacific.

Globally, higher investments for oil and gas projects and rise in number of subsea explorations are some of the key factors enabling growth. Additionally, increasing focus on well intervention technologies across the globe is expected to boost the demand in the coming future.

Driven by these development, the adoption of downhole tractor is increasing for high capacity projects. In order to keep pace with changing needs, some of the leading players are focusing on product innovation and launches. For instance, in 2018, Schlumberger announced the release of the UltraTRAC All-Terrain wireline tractor which enables to convey large payloads in challenging downhole conditions across high angles wells. The tractor system provides a feature of logging while tractoring functionality to obtain data in both up and down passes.

How Large is the Opportunity in the U.S.?

FMI has projected the U.S. to remain one of the most lucrative markets throughout the course of the forecast period. The key factor supporting market expansion is US’s high production and consumption of oil. The oil production output increased by 14% from 2017 to 2018. 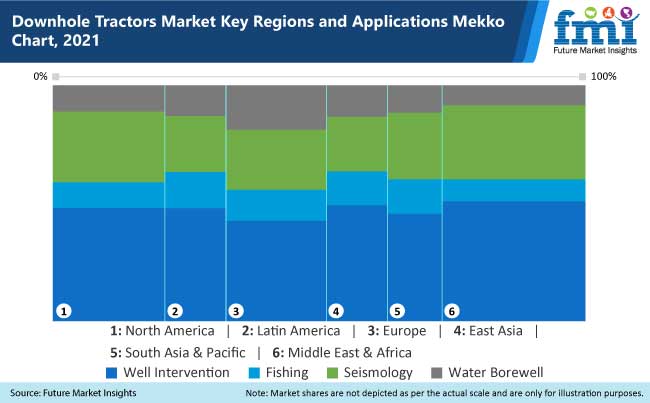 How are the Market Projections in Saudi Arabia?

The contract covered optimizing production across existing as well as new wells across the nation. The 3-year contract expected to lapse in 2021, delivered a comprehensive list of well services including wireline logging, stimulation, well testing and associated well services, thereby presenting growth opportunities for the downhole tractors market.

What are the market prospects in Norway?

Although Norway is a small player in the global oil and gas market with production of almost 2% of the global demand, however, as an exporter, Norway is a significant country in the energy sector lagging behind Russia and Qatar only. In November 2019, 3 major players in the well intervention market namely Aker BP, Schlumberger and StimWell Services formed a strategic alliance for well intervention and stimulation activities in Norway.

What factors are influencing the market growth in the United Kingdom?

According to the Oil and Gas Authority (2018), almost 7,000 wells were drilled on the UK continental shelf, out of which 2,700 were deemed active and 32% of them were subsea wells. Subsea well intervention costs at least 54% of the total expenditure of the total well intervention costs. This issue was due to the lack of data from well surveillance. Baker Hughes, also stated that the data gap was preventing UK to unlock more reserves. Therefore, UK has a high demand for economical and efficient well intervention tools, for instance, downhole tractors to ensure high-quality data logging and maintenance.

Production logging also helps diagnose problems such as leaks or cross flow. Moreover, in the near future, it is expected that the scope of production logging can be extended to enhancing inflow profiling in deepwater reserves, which will further augment demand for downhole tractor.

Why Does Seismology Segment Have a Higher Growth Rate?

Seismology plays an essential role in the oil and gas industry as it maps anomalies and formations to predict hidden storage of oil and gas within exploration activities. Most of the oilfields in Russian and CIS countries have had issues in increasing watercuts, decreasing productivity and injectivity.

Wave simulation activities via acoustic, seismic or other types of waves, is one of the way in maximizing production. The impact of seismic well stimulation can help on well improvement, restoration and oil displacement. As seismology helps in both exploration and intervention activities, it is expected to witness a high growth rate.

Which Configuration and Force are Highly Sought-after for Downhole Tractors?

The global downhole tractor market is largely dominated by established players, occupying a market revenue share of more than three-fourth of the market share. Some of the players are focusing to carve a niche for specific demography. The global market for comprises some large scale and middle scale manufacturers focusing on product innovation and high end technology development.

Key industry participants are investing in strategic alliances and partnerships to gain a competitive advantage in the evolving global market. These partnerships allow companies to strengthen their technical expertise with improved production capacity. Also, the technical collaboration of industry participants is estimated to contribute to growth in the oil and gas intervention projects.

For instance, in 2018, Saudi Aramco, one of the leading public petroleum and natural gas company in Saudi Arabia awarded Baker Hughes a stimulation and well testing contract in 2018. The contract included optimizing production across existing as well as new wells across the nation.

The Middle East and Africa currently lead the global market for the downhole tractor. Sales in Japan will be over 20% of total demand throughout the forecast period.