ADS-B is the largest segment in flight tracking system market and is valued at 372 Mn. The segment is set to be valued at 479 Mn by 2026.

For instance, on 30 March 2021,  Aireon global and NiuSky Pacific Ltd. (NSPL) announced its agreement to deploy Aireon's global, real-time, space-based Automatic Dependent Surveillance-Broadcast (ADS-B) for air traffic surveillance services. NSPL relied on ground-based infrastructure for its surveillance capabilities but because of Papua New Guinea’s extremely mountainous and difficult terrains along with unpredictable weather conditions, it was a need of the hour to improve the surveillance services. NSPL is operational with Aireon’s space-based ADS-B air traffic surveillance data over the entirety of the Port Moresby Flight Information Region (FIR). Apart from this, Rockwell Collins announced its strategic partnership with FlightAware in order to offer Aireon Space-Based ADS-B Flight Tracking system to business aviation operators.

In addition to this, in January 2019, Aviation Communications & Surveillance Systems, LLC (ACSS) announced the delivery of 10,000th production of its NXY mode-S transponder family. This is a result of capabilities provided by ACSS,a joint venture between Thales and L3. Achieving the benchmark of 10,000th NXT unit the market was projected to see new aircrafts equipped with ADS-B out by early 2020.

In terms of growth, the market in North America is anticipated to stay ahead at a promising revenue rate during the forecast period. Increased foreign investments in countries like India and China are projected to boost growth of the flights tracking systems market. Other key regions are North America, Latin America, Europe, Japan and Middle East & Africa.

This growth is attributed to the extensive growth of ADS-B infrastructure in emerging economies and adoption of enhanced air surveillance capabilities in developed economies. Growth in the overall market is mainly attributed to rising safety concerns and a substantial increase in aircraft sales globally.

These systems are offered as a standard fit in majority of the new commercial aircraft and are also being installed at a significant rate in the existing fleet size due to stringent government regulations. In terms of value, sales of ADS-B systems worldwide are projected to increase 5X over the forecast period.

Equipment required to obtain position data are offered as a standard fit in many of the new aircraft manufactured today. Data from equipment such as ADS-B is used by software technology companies to determine the accurate position of the aircraft. The increase in passenger travel demand, especially in the Middle East and Asia Pacific regions is fuelling the total demand for new aircraft, thereby contributing to the revenue growth of the ADS-B segment.

The safety of passengers and crew members is of prime importance for airline companies especially when the aircraft is flying over a region outside the radar coverage or over areas where communication with the pilot or other crew members is impossible. With increasing air travellers and tourism activities air traffic control and monitoring has become more critical and complex these days. ADS-B provides better surveillance in fringe areas and considering the rising number of incidents of aircraft missing without leaving any trace for airline companies, the need to track aircraft has become the most important objective. This factor is creating growth in the adoption of ADS-B systems worldwide.

After the recent missing Malaysian airlines flight MH 370, ANSPs, safety organisations, pilot groups, airframe and equipment manufacturers and civil aviation authorities represented by ICAO worked towards the improvement of flight tracking capabilities in aircraft. These activities have also stressed on enhancement of commercial aircraft video surveillance systems to ensure safety and effective monitoring. Regulatory authorities endorsing real-time flight tracking for commercial aircraft is one of the major factors driving the growth of the ADS-B segment. 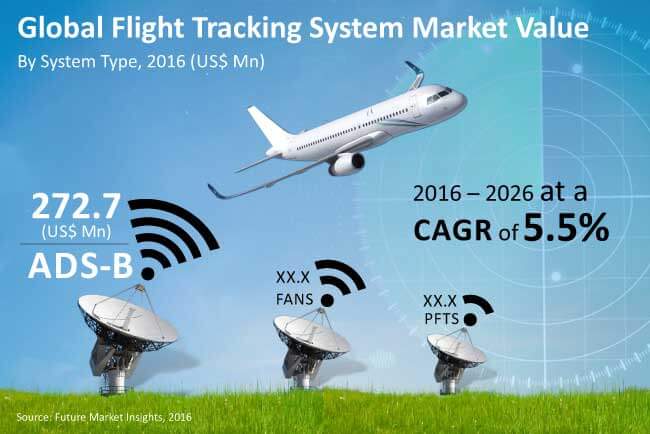 ADS-B was the dominant segment in terms of revenue in 2015 and is expected to remain dominant through 2026 in North America. The ADS-B segment in the North America flight tracking system market was estimated to be valued at more than US$ 100 Mn in 2016 and is expected to create incremental $ opportunity of more than US$ 120 Mn between 2016 and 2026. The U.S. market is primarily driven by stringent government regulations to equip aircraft with ADS-B capability for enhanced surveillance capabilities.

Moreover, rising aircraft production in the country and demand from other regions to equip aircraft with advanced tracking solutions is also driving the growth of the market. Development of ADS-B infrastructure in North America is expected to accelerate the growth of the ADS-B segment over the forecast period. Upcoming projects such as ADS-B infrastructure development are likely to drive the demand for ADS-B systems in Latin America.

What is the CAGR with which flight tracking system market is growing?

The flight tracking system market is set to grow at 5.5% CAGR through 2026.

What are the key flight tracking system companies?