The global lactates market is primarily characterised by the presence of a large number of regional and multinational companies. An approximate share of 45%-50% is accounted for by multinational players, and they are the key price regulators of the market. North America and Western Europe are the two main target regions owing to the increasing demand for processed food and beverages and novel and more efficient drug formulations in the pharmaceuticals industry.

Multinational players such as Merck KGaA Corbion N.V., Dr. Paul Lohmann GmbH KG, Alfa Aesar GmbH & Co KG, and Jungbunzlauer SuisseAG, are focussing on either global or regional expansion to meet the rising consumer demand for lactates, and are coming up with better technology advancements to improve the quality and efficiency of their products.

In developing as well as in developed countries, a remarkable rise has been witnessed in premium brands of infant formula. One of the significant reasons behind this astonishing rise in premium brands of infant nutrition is parents’ growing concerns regarding the ingredients used in infant formulations. Such pickiness about premium brands is also possibly due to the growing per capita income and increasing purchasing power of parents. Parents these days are very health conscious and they wish to select only the best nutritional formula for their babies.

By fermenting sugar, sodium lactates can be produced and these also have noteworthy market share. Sugar that is used for fermentation is generally sourced from feedstock such as corn, wheat, and sugarcane. The raw material for this fermentation is easily available in Asia that too at a very cheap cost. As a result, the overall production cost of sodium lactates is relatively low in the Asia Pacific region. 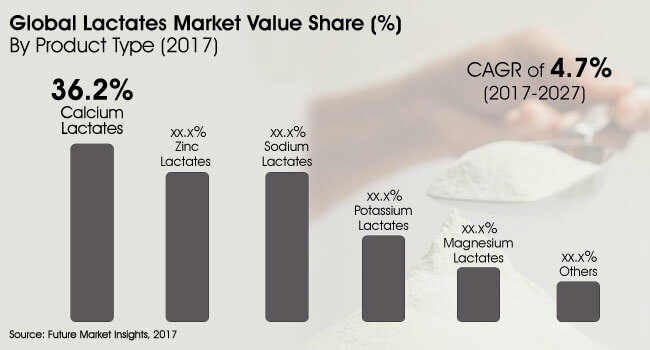 With a robust CAGR of 5.1%, the potassium lactates segment in the global lactates market is expected to exhibit the highest growth during the period of forecast. The potassium lactate segment is expected to exhibit 1.5X growth during the period of assessment. This growth can be attributed to the quality of the salt and its use as a preservative in meat and other poultry products. However, owing to the wide range of applications in drugs and food & beverages, the calcium segment captures the highest market share, and will retain its dominant position in the next 10 years. The calcium lactate segment is expected to exhibit 1.6X growth in terms of value over the forecast period.