Diverse applications – construction, mining, and oil & gas – tend to couple land survey equipment with automated technologies for enhanced monitoring of land. Advanced land survey equipment, such as robotic total stations (RTS), deliver 3D coordinates for stationary as well as moving entities by quantifying horizontal and vertical angles, as well as distances with the help of time-of-flight techniques. Robotic total stations, armed with cameras, create images for documentation purposes, setting the stage for detection and tracking of objects left unnoticed by reflectors. Photogrammetric methods, including SURF (speeded-up robust feature), and SIFT (scale-invariant feature transform), are employed in robotic total stations to monitor specific, and clear aspects of the objects in the images.

Following the calibration of the parallaxes between the camera optical center and the total station origin, the pixel coordinates of the aspects provide vertical and horizontal angles. In addition, the motion of the objects is tracked automatically in case the aspects are derived in an array of images. RTS land survey equipment operate from building models, reducing manual intervention, and enhancing accuracy. RTS requires a single individual to perform land survey in lieu of traditional layout teams, decreasing dependence on labor. Further, land surveying with RTS is paperless affair following the measurements are stored in the tablet devices. 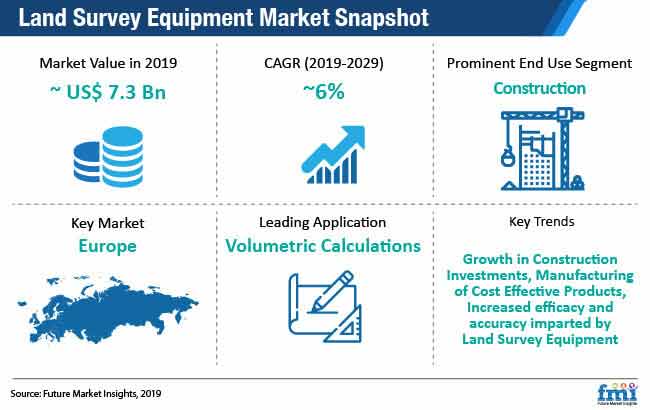 Need of Inspection and Monitoring Equipment in Multiple Industries

Over the recent years, due to the negligence of the required safety measures, the incidents of accidents had exponentially increased in order to streamline the work with proper reliability and safety many customers in different end use industries have an increased inclination towards the utilization of land survey equipment for monitoring and inspection which paced up the market for inspection and monitoring equipment to have a proper inspection and monitoring of the remote locations where the manual monitoring is not achievable or is a too tedious task to execute.

Vigorous research and development activities undertaken by land survey equipment manufacturers are supporting the development of advanced and better products in the aspect of technology. Inculcation of new manufacturing practices to cut off costs is providing value for money products, which is further encouraging customers towards procurement of concerned land survey equipment and also has initiated a trend of replacement of conventional products with new products. 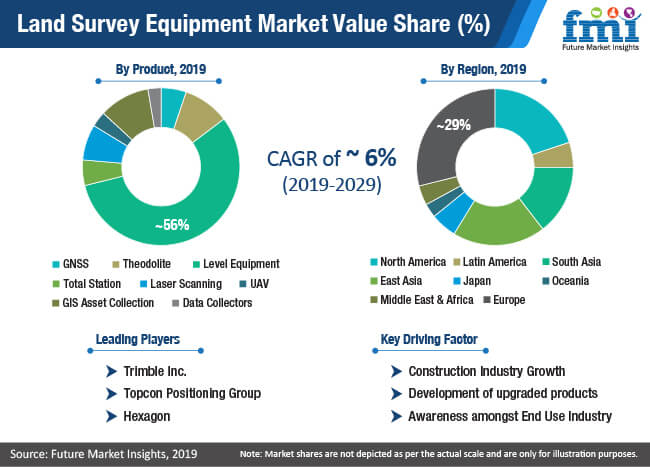 GNSS manufacturers are launching receivers that rely on smartphone apps for data acquisition, dismissing the need for an independent data collector to gather cm-degree location information. With the onset of smartphone apps, GNSS receivers are becoming cost-efficient. Coupled with real time kinematic (RTK), the accuracy of GNSS positioning improves - from a few meters to centimeters. This is attributed to the usage of carrier phase measurements in lieu of code phase measurements used by legacy GNSS receivers.

Mining operators in China, the US, and Russia are performing land exploration activities in a bid to cater to rising demands for minerals, particularly coal, for a range of purposes. The operators are supposed to survey the land in compliance with regulations to prevent boundary dispute with nearby licenses.  Surging demand for oil & gas in Middle East & Africa – Saudi Arabia, Iran, and Iraq – drives the growth upstream land explorations for oil & gas. As such, market players are eyeing the target regions to offer land survey equipment for safe and efficient monitoring of the desired land. Furthermore, China is undergoing massive infrastructural development under the 13th five-year plan, while India is on the same line under the smart cities project – an attention-grabbing factor for land survey equipment manufacturers.

To enhance user experience, market forces are designing smartphone-based land survey apps coupled with GNSS for accurate land survey activities. Land survey equipment require maintenance after complete inspection of the desired land, as such, market players are offering after sales services to the customers for proper maintenance of the equipment.

Proper and sufficient lands on the concerned locations in metropolitan regions are on the edge of shortage, giving rise to incidents of encroachment and illegal possession. Majority of such incidents invite repugnant legal disputes. Customers are turning to precise analyzation and legal survey of the land to ensure the legal boundaries meeting the required technicalities and prevention of legal conflicts in unison.

Construction buildings are liable to catastrophes due to technical faults and erroneous survey, resulting in humongous loss of resources and lives. As such, builders are embracing advanced land survey equipment for accurate monitoring of the constraints of the concerned site in a bid to plan accordingly and design well-suited infrastructures.

Future Market Insights published its recent market research report on the global land survey equipment market, which comprises the global industry analysis for 2014-2018 & opportunity assessment for 2019-2029. It includes a broad assessment of the relevant and related market dynamics. After concluding a thorough analysis on the historical and future growth prospects of the land survey equipment market, growth assumptions are made to reach accurate results.

The report provides key market trends that are expected to impact the market growth significantly during the forecast period. Detailed industry trends are provided in this section, along with the key market developments and product innovations. Also, this section includes key inclusions of the report. It includes the product adoption & usage analysis, opportunity analysis, and manufactures’ strategies for market expansion.

This section explains the global market value analysis and forecast for the land survey equipment market in the forecast period of 2019-2029.

This section highlights the average price of equipment employed in land survey equipment. Pricing benchmarks for manufacturer- and distributor-level pricing are analyzed in this section.

This chapter provides a detailed assessment of the land survey equipment market on the basis of Products Type Such as GNSS Systems, Total Stations, UAV, Theodolites, GIS Asset collection, etc. In this chapter reader can analyze and understand the market attractiveness analysis based on Product Type

This chapter provides details about the land survey equipment market on the basis of inspection, monitoring, volumetric calculations and layout points. In this chapter, readers can understand the market attractiveness analysis based on application.

This chapter provides details about the land survey equipment market on the basis of mining, oil and gas, construction, and agriculture. In this chapter, readers can understand the market attractiveness analysis based on end use.

This chapter includes detailed analysis of the growth of the North America land survey equipment market, along with a country-wise assessment that includes the U.S. and Canada. Readers can also find regional trends, regulations, and market growth based on end users and countries in North America.

Readers can find detailed information about several factors such as pricing analysis and regional trends that are impacting the growth of the Latin America land survey equipment market. This chapter also includes the growth prospects of the Land survey equipment market in prominent LATAM countries such as Brazil, Mexico, and the Rest of Latin America.

Important growth prospects of the land survey equipment market based on its end users in several countries such as Germany, the U.K., France, Spain, Italy, Nordics, Russia, and the Rest of Europe are included in this chapter.

Important growth prospects of the land survey equipment market based on its end users in several countries such as China and South Korea are included in this chapter.

Important growth prospects of the land survey equipment market based on its end users in several countries such as India, Malaysia, Thailand, Indonesia, Singapore, and Rest of South Asia are included in this chapter.

This chapter provides information about how the land survey equipment market will grow in major countries in the MEA region such as South Africa, North Africa Turkey, and the Rest of MEA during the forecast period of 2019-2029.

In this chapter, readers can find detailed information about the tier analysis and market concentration of key players in the land survey equipment market, along with their market presence analysis by region and product portfolio.

This chapter includes a list of acronyms and assumptions that provide a base to the information and statistics included in the land survey equipment market report.

In this section, acronyms mentioned in the report are briefed and also some assumptions considered are mentioned to offer a clear perspective to the reader while contemplating the report.

Primary research interviews with key opinion leaders and other participants were conducted for data collection and validation of the below information: 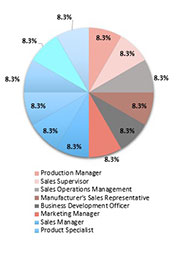 To Learn More About our Comprehensive Perspective on Land Survey Equipment Market,