Lipids are termed as a large organic compounds that fall under the classes of fatty acid derivatives or closely related compounds. Lipids are generally insoluble in water but exhibit high levels of solubility in organic solvents & alcohols. Lipids include esters & fats with analogous properties & further constitute carbohydrates & proteins. The primary functions of lipids include stowing energy, signaling and performing as key structural components for cell membranes.

Lipids are widely used in various end-use industries such as personal care and cosmetics, food and beverage and pharmaceutical. Increasing urbanization has brought about tremendous lifestyle changes in in different regions, which is, in turn, catering numerous benefits for the personal care and cosmetics industry. Digitalization and social media have played a vital role in the advertisements and sales of various cosmetics.

From a regional/country perspective, the lipids market is dominated by China, owing to the high demand from personal care & cosmetics and food and beverage industries in China. China is projected to witness healthy growth over the forecast period, which can primarily be attributed to the increasing per capita disposable income of people in the country. The growing food and beverage industry in China is another key factor expected to drive the sales of lipids over the forecast period

The global lipids market is saturated with numerous global and regional manufacturers. Manufacturers in the lipids market are engaged in R&D activities to develop new products and thus, cater to the rising demand and withstand the competitive environment in the market. The regional markets are primarily dominated by the domestic manufactures engaged in the sales of lipids in the nearby regions. Global manufacturers collaborate with regional players to expand their sales footprint in the region. Changing trends in the food and beverage industry and ongoing research and developments in the pharmaceutical industry have impelled manufacturers to provide customized lipid products. 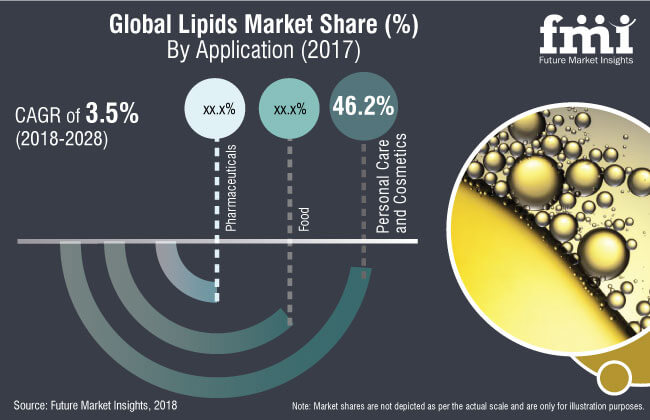 The demand for lipids in different regions is entirely depended on the macro-economic factors prevailing in a particular region. In order to keep pace with the macro-economic factors and sustain competition from other global players, bigger players in the market are focusing on acquisitions or collaborations with domestic players in order to strengthen their sales networks in regional markets. Moreover, manufacturers are focusing on forging agreements with the distributors and suppliers that have global presence in order to strengthen their sales footprint.

Some of the players reported in this study on the global lipids market include Merck Millipore Ltd, Avanti Polar Lipids, ABITEC Corporation, Chemi S.p.A, Tokyo Chemical Industry Co., Ltd, Stepan Company, Archer Daniels Midland Company, NOF Corporation, Cayman Chemical and Matreya LLC, among others. Moreover, manufacturers of lipids have been channelizing efforts towards strengthening their research & development activities and focusing on specific regions to cater to the regional markets. This is expected to positively impact the lipids market in the near future.