Demand for plant-based food products is accelerating. Rising health and animal welfare concerns are prompting consumers to select vegetarian alternatives. At the same time, they also demand the same taste and tenderness associated with animal-derived meat and meat products.

Recently, animal welfare has become the cornerstone of global food consumption trends. Societies such as People for the Ethical Treatment of Animals (PETA) and World Animal Protection (WAP) have been advocating animal humanization on an enhanced scale.

Gradually, this trend is penetrating the global market, with several developed countries across North America, Europe and East Asia opting for vegetarian and vegan diets, thus fueling growth of the market.

Players are innovating product lines by increasing nutrient content and reducing fat. Technologies such as new plant breeding techniques (NPBT) are expected to contribute immensely to this meat 2.0 revolution, leading to the expansion of plant-based chicken market.

As veganism expands across the globe, consumers are demanding sustainable packaging solutions to compliment this trend. Like every foodstuff, plant based chicken products need to be carefully packaged to deliver them safely and securely.

Since a majority of the world’s population has access to these platforms, awareness is spreading exponentially, causing significant shifts in food consumption habits. Additionally, leading manufacturers are exploiting these platforms to extensively market their products. This is laying a fertile ground for plant based meat industry proliferation.

Plant based meat products have received significant backlash by critiques and analysts around the world. Reports about over-processing and use of genetically modified organisms to accelerate production are eclipsing market growth.

While foods such as Impossible Burger and Beyond Meat may prove to be a boon for the environment, their preparation process is not as healthy as it is portrayed. Due to over-processing, a significant proportion of nutrients is lost. Moreover, accumulation of high saturated fats may induce chronic ailments.

Europe & MEA collectively is expected to be the largest market. Demand is especially strong across Germany, the U.K and Italy. Heightening awareness about vegan food benefits is driving growth.

Since two years, plant-based meat alternatives have made inroads in the Middle East, especially the United Arab Emirates. Meat substitutes from soy-based proteins are garnering immense popularity. As per FMI’s projections, the market is poised to capture nearly half of the global revenue share by 2030.

Request a sample specific to the Europe & MEA market.

North America is expected to capture over a third of the global market share, reaching nearly US$ 3 Bn by 2030-end. Prevalence of various lifestyle induced diseases is driving market growth. The United States has the highest incidence of heart diseases, diabetes, cancers and strokes, all because of excessive meat consumption. 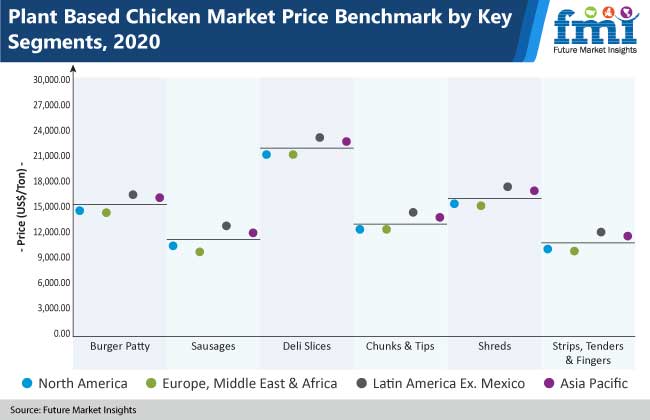 Food giants such as Burger King and KFC have strived to introduce plant-based substitutes which retain the taste and texture of conventional meat dishes. Various startups such as Impossible Burgers and Beyond Meat are rapidly flooding the market with their plant-based offerings.

Request a sample specific to the North America market.

A flexitarian population is attracting numerous plant-based meat manufacturers to Latin America, generating a favorable business environment in the forthcoming years. The region is scheduled to expand at a CAGR of 24.2%.

Colombia, Brazil and Argentina is likely to be forerunners of the Latin American market. Governments in the aforementioned countries have amended business policies to accommodate prominent vendors.

On the supply side, the plant-based food industry has helped generate employment. Amid the COVID-19 crisis, the green economy has the potential to create 15 million new jobs in this region. Thus, growth prospects look optimistic.

Request a sample specific to the Latin America market.

The burger patties segment is expected to be the most lucrative by product type. More than two out of five sales are in the form of burger patties, specifically across fast food joints. A valuation exceeding US$ 3 Bn is projected by 2030.

Trailing behind is the cutlets segment, scheduled to generate over 12% of the global plant based chicken revenue. Cutlets are widely used across restaurants and homes for preparing various chicken alternative dishes.

Soy-based Proteins Most Preferred by Source

By source, soy-based proteins are expected to be most widely consumed. Multiple health benefits such as enhanced cardiovascular health, cancer prevention and improved post-menopausal health among women are some factors fueling its growth.

However, wheat-based proteins are acquiring major ground, expanding at a CAGR worth 22.5%. Wheat-derived proteins are helpful in providing enhanced muscle maintenance, especially among geriatrics, leading to its heightening consumption.

A CAGR of 21% is expected in the online sales segment. Both conventional platforms such as Amazon as well as specialized online food channels such as Big Basket and Grofers are becoming highly popular for selling plant based chicken products.

The food & beverages domain stands to gain the most out of the crisis, with demand for plant-based foods experiencing steep incline. Increasing apprehension among consumers about the possible spread of COVID-19 through animal-based food products is stimulating demand for vegan alternatives.

This surging requirement for clean label and naturally derived foods is catapulting the market. Demand is especially strong across the United States, Brazil and India, as they have the highest number of COVID-19 infections. Therefore, people are altering their dietary preferences, prompting manufacturers to increase their presence.

Some of the leading plant-based chicken companies include*:

*This list is indicative- full details of players is available upon request.

The market is highly competitive, characterized by the presence of a multitude of regional and global level manufacturers. Amongst all the companies profiled, Impossible Foods Inc. and Gardein by Conagra Brands are the dominant players, capturing a significant chunk of the revenue share.

Companies within this landscape are concentrating on technological innovations with respect to product design. Special emphasis is being laid on incorporating non-GMO and organic ingredients. Besides, partnerships, collaborations and acquisitions are also considered.

In July 2016, Impossible Foods made its debut by introducing the world’s first meat analogue product titled the Impossible Burger, which is derived primarily from plant-based products. The production process involves 95% less land and 74% less water usage.

Likewise, Gardein by Conagra Brands markets products such as Chick’n and Turk’y, Beefless and Porkless, Fishless and Plant-Based Jerky. Such a wide product offering has enabled the company to capture a large customer base. It also runs the ‘Meatless Monday’ program.

In December 2019, Atlantic Natural Foods announced the launch of its award-winning plant based Chipotle Bowl Meal Solution in over 500 Costco stores throughout North America. This introduction helped the company achieve 100% growth for the FY 2019-20.

In July 2019, Dunkin Donuts announced it would be selling breakfast sandwiches using Beyond Meat’s Meatless Sausage line of products throughout Manhattan, New York City. The company also launched an e-commerce website in 2020 to increase its virtual presence.

In 2019, Puris Proteins collaborated with Cargill Foods to invest an additional US$ 75 million with the objective of doubling pea protein production while inaugurating its 200,000 square foot manufacturing plant in Dawson, Minnesota. This expansion will help Puris augment its protein foods innovation capacities multifold.