High prevalence of Pneumonia and pneumococcal disease attributes the demand of pneumococcal vaccine. According to National Centre for Immunization and Respiratory diseases, US witnesses approximately 250,000 people suffering from pneumonia which leads to about 50,000 deaths, infants or adults combined. Increased government guidelines and regulations for generating awareness regarding the disease is the major factor for growth of vaccine in developing countries. Focussing on more and more development of vaccine in developing as well as developed countries remains the key concern for the manufacturers. Development in emerging economies is underway. For instance,

Serum Institute of India in December 2020 announced the launch of India’s first developed pneumococcal vaccine, Pneumosil. The vaccine is developed in collaboration with PATH and the Bill and Melinda Gates Foundation. The developments aims to provide vaccine to low and middle income countries at affordable rates. The vaccine will provide children with long lasting and effective protection against pneumonia.

Shinogi and HanaVax in September 2020 have entered into a license agreement for manufacturing, distribution, commercialization and research and development, of Streptococcus pneumoniae developed by HanaVax.  The vaccine developed will avoid the pain of injections required to treat pneumonia or pneumococcal related diseases in Japan. As Pneumonia is the fifth leading cause of death in Japan, the vaccine developed in the country aims to decline the death rate among infants and geriatric population.

Geographically, the global pneumococcal vaccines market is segmented into seven major regions viz. North America, Latin America, Western Europe, Eastern Europe, Asia Pacific (Asia-Pacific excluding Japan), Japan and the Middle East & Africa (MEA). In terms of value, North America was the leading player for pneumococcal vaccines in 2017 and is expected to expand at high CAGR of 10.2% over the forecast period of 2018–2028.  Asia Pacific is expected to contribute significant revenue share due to increasing government funding and the addition of pneumococcal vaccines in national immunization programs in the region. 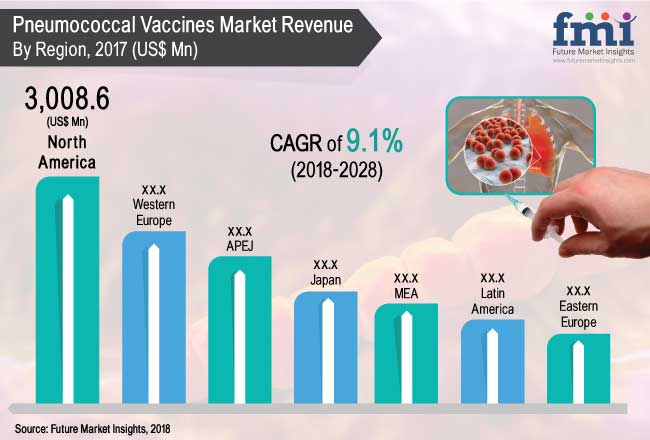 The subsequent section of the report provides analysis of the market on the basis of regions and presents forecast in terms of value for the next 10 years. The regions covered in the report include:

The next section classifies the product type and presents the forecast in terms of value (US$ Mn) for the next 10 years. The product types covered in the report include: