Dengue vaccine development has entered an important stage of its lifecycle - with a host of pharmaceutical giants expected to present the results of their extensive clinical trials initiated in the past decade or half-a-decade. Future availability of various alternatives is likely to break monopoly of the existing Denvaxia® vaccine.

In its new study, ESOMAR-certified market research and consulting firm Future Market Insights (FMI) offers insights about key factors driving demand for dengue vaccines. The report tracks the global sales of dengue vaccines in 20+ high-growth markets, along with analyzing the impact COVID-19 has had on the healthcare industry in general, and dengue vaccines in particular.

How do Historical Projections compare to Future Market Outlook?

The dengue vaccines market was valued at nearly US$ 250 million in 2017, with a plethora of pharmaceutical giants investing in R&D funding to initiate large-scale clinical trials. Up until now, the market has experienced only one major breakthrough in terms of vaccine availability, a trend which is expected to be relegated to the past, as companies are expected to publish their finding by 2021-end.

This is expected to result in multiple vaccine candidates in the upcoming decade. Amidst the COVID-19 pandemic, dengue vaccine product has taken a temporary backseat, as prominent manufacturers have dedicated existing production units towards the development of an anti-SARS CoV-2 vaccine, as evidenced by Takeda Pharmaceutical’s ad hoc surrender of its facility at IDT Biologika GmbH to Johnson and Johnson to manufacture single-shot COVID-19 vaccines.

According to FMI’s analysis, the global dengue vaccines market is expected to witness prolific developments in the future, expected to cross US$ 1 billion by 2031 and registering a double digit CAGR during the forecast period. As key pharmaceutical companies conclude their clinical trials, analysts are hopeful of new product launches, thereby widening growth scope.

How is the Rising Global Burden of Dengue Fever Stimulating Growth?

According to the World Health Organization, the incidence of dengue has grown dramatically over recent decades. A vast majority of the cases are asymptomatic, mild or self-managed, and hence the actual number of infections are highly under-reported. One modelling estimate indicates 390 million dengue virus infections per year (95% credible interval 284-528 million), of which 96 million manifest clinically.

Another clinical study has established that nearly 4 billion people are at risk of infection. Despite a risk of infection existing in 129 countries, 70% of the actual burden is concentrated in Asia. Furthermore, the number of reported dengue cases over the past two decades have increased eightfold since the past 20 years, from 505,430 cases in 2000 to over 2.4 million in 2019, with death rates climbing from 960 to 4032.

As of 2020, dengue continues to affect several countries, with the Americas reporting over 3 million cases out of which 25,000 are classified as severe. High incidences were also reported across Bangladesh (101,000), Malaysia (131,000), the Philippines (420,000) and Vietnam (320,000). Hence, major pharmaceutical giants are accelerating the pace of their ongoing clinical trials, as well as initiating new ones so as to capitalize on this opportunity and expand their presence.

How are Country-level Partnerships to Immensely Bolster Growth Prospects?

Amid the dearth of adequate vaccine candidate availability in the market, prominent pharmaceutical manufacturing hubs are leveraging international level partnerships so as to further vaccine research & development. For instance, the Department of Biotechnology in India is directing concerted efforts to strengthen vaccine R&D through its Vaccine Action Program.

As part of this initiative, the Indo-US Vaccine Action Program (VAP) was initiated in 2017. This is a bilateral program developed by the National Institute of Allergy and Infectious Diseases (NIAID) of the National Institutes of Health (NIH) within the Department of Health and Human Services, United States and the Department of Biotechnology (DBT), Ministry of Science and Technology, Government of India, in conjunction with the Human Immunology Project Consortium (HIPC).

India’s market for dengue vaccines is undergoing a critical change with assistance from national expert groups and the aforementioned program. Important stakeholders are gaining awareness about such collaborative initiatives, which is assisting key pharmaceutical corporations achieve significant strides in vaccine development. This is anticipated to bolster growth prospects for the global dengue vaccines market in forthcoming years.

Why are Manufacturers Likely to Find Lucrative Opportunities across the Asia-Pacific?

As the global dengue fever incidence burden is largely concentrated across Asian countries, prominent pharmaceutical corporations are expected to find promising revenue streams across countries such as India, Japan and South East Asia. Takeda Pharmaceuticals, a prominent Japanese multinational pharmaceutical company, has begun its regulatory submissions for dengue vaccine candidate, TAK-003, in the EU and dengue-endemic countries including Brazil and Indonesia.

On a similar note, India-based Serum Institute initiated a clinical trial in 2017 for verifying the efficacy of its VIS513 monoclonal antibody to treat dengue infections throughout the Indian subcontinent. The company holds exclusive licenses to the treatment for commercialization across all seven countries, and has invested a sum of US$ 5 million, which would yield an additional US$ 34 million upon achievement of the set milestone.

Similarly, Sun Pharmaceutical Industries Ltd. has forged a partnership with the International Center for Genetic Engineering and Biotechnology (ICGEB) to develop a dengue vaccine which is safe, effective and affordable. As per this agreement, Sun Pharma is funding and developing the DSV-4 vaccine candidate that targets all four serotypes of the dengue virus.

As is established, the global dengue vaccines market is currently characterized by the presence of a single vaccine candidate, that of Sanofi Pasteur’s Dengvaxia®. Moreover, upcoming vaccine candidates are still undergoing phase II/III clinical trials, meaning that their market availability will be postponed.

Until that time, medical practitioners will have to rely on topical drug treatments. Additionally, basic sanitation and hygiene practices are the only course of action in some regions, as availing the vaccine is often very expensive. All these factors are anticipated to decelerate growth of the dengue vaccines market to a significant extent.

Why are Dengue Vaccines Uptake Increasing in the US?

According to the Centers for Disease Control and Prevention (CDC), dengue outbreaks occasionally occur in the continental United States. However, these outbreaks are common across its overseas territories, including Puerto Rico, the US Virgin Islands and American Samoa respectively. In the mainland, outbreaks were frequent across Hawaii (2015), Florida (2013, 2020) and Texas (2013).

In May 2019, the US Food & Drug Administration approved the use of Sanofi’s Dengvaxia® live attenuated vaccine, and is administered as three separate injections in 9-through-16 year olds. In addition, existing trials for the ChimeriVaxTM Tetravalent Dengue Vaccine is expected to yield conclusive results in the future, paving the way for the entry of another potential vaccine candidate.

How is Mexico Generating Demand for Dengue Vaccines?

The World Mosquito Program has established that mosquito-borne disease are a growing threat to local communities across Mexico. A series of large-scale dengue outbreaks have occurred in recent years, with infection rates further poised to surge by 40% in the next 5 decades. Consequently, government initiatives to promote an extensive vaccination campaign have increased in the past few years.

Growth is accelerating amid an alarming increase in the incidence of dengue fever in the previous decade. An NCBI study published in 2015 estimated that the regional burden of the disease amounted to about 139,000 (95%) symptomatic and 119 fatal annual dengue episodes on an average (2010-11). The annual cost of vector control and surveillance amounted to US$ 170 million.

Besides introducing vaccines, the government is investigating high sustainable and naturally controlling solutions. An example of this is the breeding of Wolbachia bacteria laden mosquitos, which when mixed with wild mosquitoes have a reduced chance of spreading the dengue virus and thus control its spread.

What Initiatives are Being Undertaken by the Indian Government?

The National Vector Borne Disease Control Program initiated by the National Health Mission has been playing a highly instrumental role in managing and controlling the spread of dengue fever in India. Significant strides have been made, with the burden reducing from nearly 100,000 cases in 2015 to just over 4500 as of March 2021.

While Sanofi’s Dengvaxia has dominated the Indian dengue vaccine market, in recent years, Takeda Pharmaceuticals has claimed progress in its vaccine efficacy upto 80% in a clinical trial conducted amongst 20,000 children aged between 4 and 16 years in the 12-month period after the second dose, which was administered three months after the first one.

While vaccine development is still in its nascent stages, efforts are ongoing to curb the disease’s spread by implementing a series of cleanliness and hygiene programs. For instance, in 2019, the Delhi government reported that there were over 200 Mohalla Clinics as opposed to 2015, which saw the very first clinic. These air conditioned private hospital-like atmosphere clinics distribute 109 essential medicines, conduct 212 diagnostic tests run by a panel of highly competent doctors.

How is Brazil Likely to be an Important Dengue Vaccines Market?

According to popular estimates, Brazil registers the highest number of global dengue cases, with 3.2 million active infections and 800 deaths reported from 2009 to 2014. This number increased by 600% in 2019. Lack of awareness regarding proper treatment and eradication is the key reason behind this massive upswing.

This problem is being further aggravated by the improvised expansion of cities, environmental destruction and the unusually wet periods that have accompanied climate change. All of these changes are highly conducive to mosquito growth, thereby increasing the menace of this disease in recent years.

Hence, government initiatives to promote extensive vaccine deployment have increased. In December 2018, pharmaceutical giant Merck & Co. joined hands with the Instituto Butantan based in Sao Paulo to develop at least two vaccine candidates for this disease. The collaboration is backed by specific rights by the US National Institutes of Health’s National Institute of Allergy and Infectious Diseases (NIAID), and has been developing the TV003 vaccine candidate. 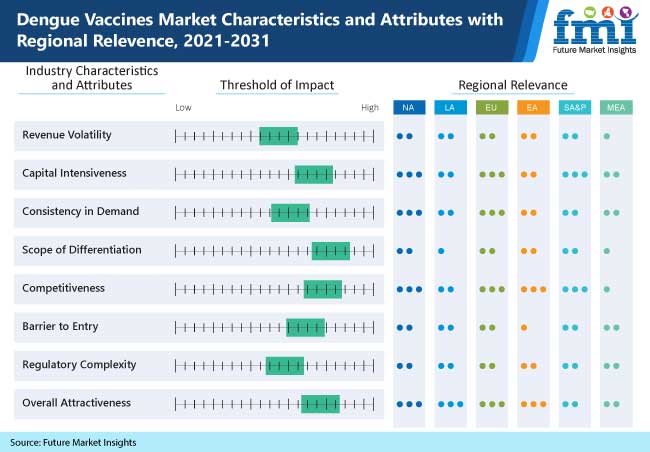 Why is CYD-TDV (Dengvaxia) the Most Preferred Candidate?

Presently, Dengvaxia is being marketed by pharmaceutical giant Sanofi Pasteur, and has been approved across 19 countries and the European Union. It also gain approval across the US market in 2019. The vaccine is approximately 76% effective in preventing symptomatic, laboratory confirmed dengue diseases in 9 through 16 years of age. Simultaneously, several other corporations are developing new vaccine candidates, thus generating immense revenue potential.

By end-user, governments are anticipated account for bulk of the global dengue vaccines market demand, generating over half of the total revenue share by 2031-end. This is largely attributed to increasing number of policy level initiatives to reduce the incidence of dengue fever across major countries.

Over the years, major eradication campaigns have been initiated across emerging economies such as India, Brazil, Mexico, Malaysia, Vietnam and several African nations, as these are considered to be key dengue hotspots. Consequently, clinical trials have been initiated by numerous pharmaceutical companies to augment vaccine availability, thus stimulating growth.

Sanofi Pasteur is the most prominent dengue vaccine manufacturer, currently offering the Dengvaxia®, a tetravalent dengue vaccine which is highly effective for preventing outbreaks resulting from all four dengue virus serotypes in preadolescents, adolescents and adults, aged 9 to 45 years. The vaccine was approved after an extensive clinical development program spanning 40,000 people across 15 countries.

In 2018, Merck & Co. collaborated with Instituto Butantan, Sao Paulo, Brazil, a non-profit producer of immunobiologic products to develop vaccines to protect against dengue virus. The partnership was aimed at developing live attenuated tetravalent vaccines (LATV). In addition, the institute also initiated its Phase 3 clinical trials for the TV003 vaccine candidate.

In March 2021, Takeda Pharmaceutical Company Limited announced the approval of its TAK-003 dengue vaccine candidate by the European Medicines Agency (EMA), currently under investigation for preventing any outbreaks in individuals aged 4 to 60. The company also intends to apply for regulatory approvals in Argentina, Brazil, Columbia, Indonesia, Malaysia, Mexico, Singapore, Sri Lanka and Thailand through 2021.

According to FMI’s report, the following dengue vaccine manufacturers operate within the global market landscape*: