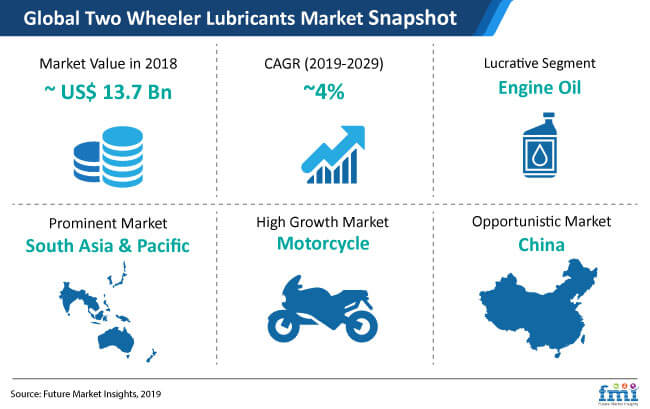 As a consequence of the increasing disposable income of the population in rural areas and the backwardness of well-established public transportation systems, the demand for two-wheelers such as conventional motorcycle and scooters has increased significantly in such areas. Furthermore, the transportation infrastructure of rural areas is still in its primary stage when compared to developed and urban areas.

Prices of crude oil have witnessed a steep decline over the past year and a half. In 2014, the average crude oil price was pegged at ~US$ 96 per barrel as compared to ~US$ 43 per barrel in 2015. This steep decline in global crude oil prices can be attributed to the relatively weak economic growth in key markets, coupled with the global oil supply glut.

Since last few years, some of the key economies, such as China, a major importer of commodities and ASEAN countries, especially crude oil - have witnessed relatively low economic growth, which in turn, has affected the global oil imports and consumption. Conversely, the global oil supply has witnessed a steady increase over the same period due to the steadily increasing oil production in OPEC countries, the shale revolution, and re-entry of Iran in the global oil market.

Another trend of Two Wheeler Rental is also picking up in the market which is further expected to drive growth in consumption of two-wheeler lubricants across the globe. 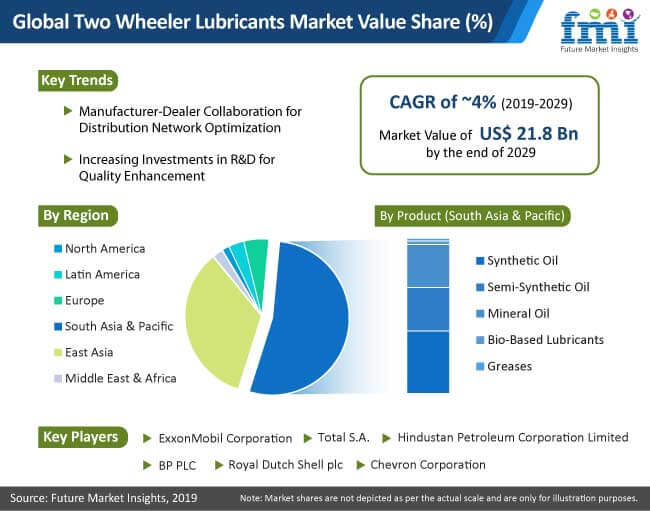 In the era of electric mobility where battery is the fuel, automotive and transportation industry has been witnessing significant transformation and megatrends. The engine technology is changing fast, as emission regulations intensify and consumer demand for affordable yet efficient vehicles increases. As electrification takes hold of the transportation sector, disruption is also expected in automotive lubricants space, which has traditionally been one of the most attractive areas in oil & gas value chain.

Although the global lubricant brands are not likely to be affected by electric mobility anytime soon, companies are getting ready to draft new strategies to thrive in the disruptive business world. The ‘two-wheeler lubricants market’, though slightly touched by the emerging technologies, remains a bright spot in an otherwise slow-moving lubricants market, owing to its significant growth in developing economies.

To analyze what lies ahead on the horizon, Future Market Insights (FMI) has conducted an in-depth study on two-wheeler lubricants market and developed the growth projections up to 2029.

Today’s two-wheeler lubricants market is being shaped by a number of trends such as population growth, increasing mobility, rise in vehicle ownerships, and robust two-wheeler sales. In rural and semi-urban areas, poor infrastructure, demographic, and economic realities have mandated two-wheelers as indispensable means of transportation, thereby preparing ground for increasing the production of two-wheeler lubricants.

Sensing continuous investments in infrastructure projects and increasing number of women and young population driving conventional motorcycles and scooters, especially in developing regions, stakeholders are gearing up to tap the market by rolling out new products, developing brand-specific lubricants, and expanding geographically.

However, it is pertinent to note that, today’s consumers are increasingly demanding fuel economy improvements, reduced CO2 emissions, and ultimately zero emissions travel – leading to a rise in sales of electric scooters (two-wheelers) as well as cars. In addition, restrictions on two-wheeler usage in major cities along with a sharp decline in two-stroke vehicle population leading to an uptake of four-stroke vehicles are likely to represent as a threat to the steady growth of the market.

High growth prospects of the market are expected in developing countries across Asia Pacific, Latin America, and Africa, on the account of successful penetration of two-wheelers in both rural and urban areas along with increasing usage of such vehicles as taxis and for goods transportation. A rise in the demand for high-end motorbikes for recreational purposes in developed nations is further likely to open new avenues for market participants.

With a mass adoption of newer technologies and demand for qualitative evolution in two-wheeler lubricants, manufacturers are making a shift towards premiumization and developing a pipeline of technologically innovative and advanced products. In addition, an alarming level of air population has been forcing governments to tighten emission limits and improve fuel quality, which in turn, is likely to drive lubricant quality improvements.

Although the relationship between vehicle design and lubrication remained consistent, vehicle designs are changing. Advancements in two-wheeler designs are likely to call for more advanced lubricants with superior oxidative stability, capable of minimizing wear and maintaining hardware durability.

As the focus on vehicular emissions intensifies, market players will need to venture into renewable energy space and explore the potential of bio-based lubricants that not only comply with regulations but also have lower impact on the environment.

Two-Wheeler Lubricants Market – Gearing Up for the Road Ahead

With increasing environmental concerns and an inclination towards enhanced fuel economy, two-wheeler lubricants industry has been moving to lighter viscosity grades. As components in next-generation two-wheeler become more compact, lubricants have to work synergistically to ensure smooth and safer ride. Market players are thus aggressively investing in R&D for advanced lubricants that can aid in improving theperformance of vehicular components.

Sensing a saturation of certain products in mature markets, a number of OEMs are establishing strong partnerships and collaboration with local dealers to strengthen their distribution network. Additionally, advances in manufacturing and refining technologies have brought more focus on lubricants which have high load bearing capacity, adequate viscosity, and low coefficient friction. Strategic acquisitions and joint venture between global and local players will further remain a key to gaining distinct competitive edge in the two-wheeler lubricants market.