There is a certain class amongst society, particularly in affluent nations in Europe and North America that is extremely active in recreational sports such as country-side riding with high-engine capacity conventional motorcycles.

This trend of recreational activities has changed the perception of conventional motorcycles in these regions and the key demographic to focus on is men above the age of 35 years. These consumers are helped by a high disposable income allowing them to indulge in leisure activities that revolve around conventional motorcycles such as biking stunts, racing, and off-roading.

The public transportation systems in emerging economies in Latin America, Africa, and Asia are not exactly known for their efficiency. That is the primary reason why customers in these populous countries prefer to commute with their self-owned vehicles. As the per-capita income here is much lower than that of developed nations, the vehicle of choice is usually a conventional motorcycle.

Conventional motorcycles have the dual benefit of being more convenient in addition to being cost-effective. A report by Moovit states that the average commuter in Mexico spends nearly 90 minutes every day while using public transport that can be avoided by using conventional motorcycles.

Economical motorcycles triumph over scooters in the global arena

Economical motorcycles dominate the global conventional motorcycles market and are especially popular in emerging economies that prioritise fuel-efficiency over performance. Motorcycles have several advantages over scooters such as a lower cost of maintenance in the long run, a larger fuel tank, and greater longevity.

However, that doesn’t mean that motorcycle manufacturers have not made their products any less stylish to appeal to fashion conscious buyers. More often than not, conventional motorcycles have a sportier look and better performance than conventional scooters, offering their buyers the best of both worlds. 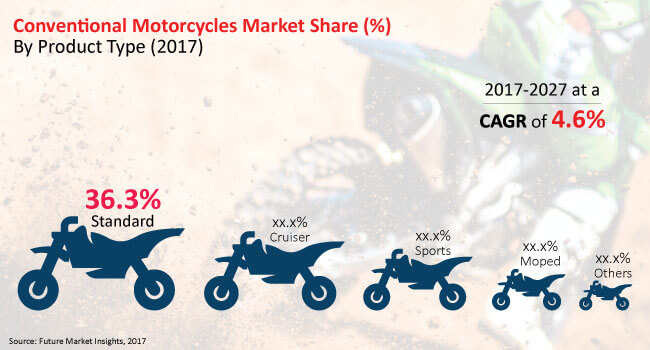 With scandals such as Dieselgate, countries across the world have begun to crack down aggressively on fossil fuels by tightening their emission norms and imposing heavy penalties on offenders. China, one of the world’s largest conventional motorcycles market, is actively promoting electric bikes and this can have a substantial impact on the global conventional motorcycles market.

Electric bikes are energy efficient, emission free, low-cost, and do not require a license or any sort of registration and these factors can pose a challenge for conventional motorcycle makers.

Furthermore, the tax rate in some countries such as India has considerably increased on items perceived to be in the luxurious category. The Indian government has raised tax on conventional motorcycles with engine capacity greater than 350 cc to 31%, which could prove to be a dampener in the sales of conventional motorcycles in this dynamic country.