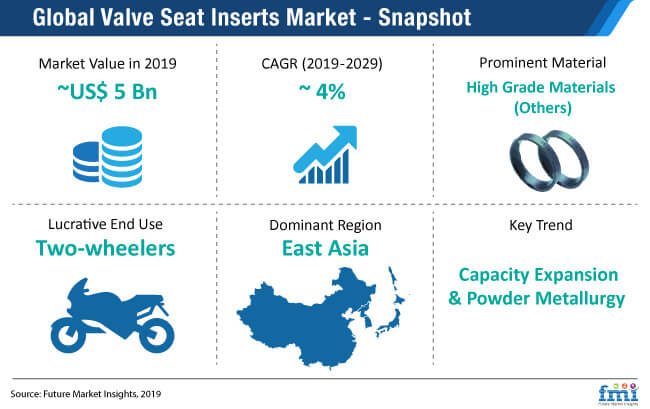 How Powder Metallurgy Will Transform the Valve Seat Inserts Market

Thus, to handle the more severe conditions within these engines, the OEMs are equipping engines with sintered valve seat inserts. However, cast chrome and auxiliary alloy-based valve seat inserts will not adequately withstand the demands of environment. Nickel-based alloys and others (high grade material) are imperative for the valve seat inserts market growth over the coming years.

Global automotive production and sales are subject to cyclical trends and imponderables to sway the market performance in the foreseeable future. The companies in the valve seats market are expanding aftermarket offerings to capture value from existing vehicle parc and aftermarket exports.

Ongoing Production Cuts by the OEMs to Stifle the Market Growth

Manufacturers are heavily focusing on cutting down the production, as numerous variations in the product line-up are proving expensive and complicated while incentives and marketing supports are strained. Rise of rental fleet and ride sharing scenario in the market space will directly impact the production of vehicles and valve seat inserts market.

Recently, the OEMs outlined plans to launch new EVs to hit annual sales of 23 million electrified vehicles by 2023. Subsequently, aftermarket will be the key arena where manufacturers of valve seat inserts can find their winning imperative against the backdrop of a mammoth automotive fleet.

A host of geographical and technological developments is expected to disrupt the automotive aftermarket pertaining to valve seat inserts over the next 8-10 years. Prominence of automakers in East Asia squarely influence the demand for valve seat inserts.

On the other hand, India is at the forefront of many segments - leading in two-wheelers and tractors across the world. An evolving regulatory and trade environment is forming the backdrop for the valve seat inserts market development. Moreover, the Society of Indian Automobile Manufacturers cited that lower government spending, the impact of the election, and production cuts by companies is going to impact the valve seats market.

Manufacturers operating in the automotive sector have consistently adapted to the evolving technological innovations and industrial landscape. In the last couple of decades, there has been a significant surge in the number of automotive vehicles worldwide. Further, the demand for off-road vehicles and industrial machinery witnessed a steady growth which in turn, has influenced the growth of the valve seat inserts market.

In the current scenario, consumer trends have played an important role in shaping the valve seat inserts market as consumers are leaning towards valve seat inserts made from thermal resistive and durable materials. The demand for valve seat inserts produced by powder metallurgy observed a steady growth, owing to their credible benefits including, enhanced performance, reduced costs, and improved component complexity.

At present, manufacturers operating in the valve inserts market are focusing on addressing customer demands and reducing costs to increase sales. In addition, research and development activities have increased at a rapid pace as manufacturers are exploring the potential of using new materials to develop valve seat inserts and simultaneously ensure that engine performance and durability is not affected.

In the current scenario, the demand for compact and highly loaded engines and engines that use alternative fuels to function is on the rise. However, the aforementioned engine generate high temperatures and exert high degree of combustion pressure on the valve train and valve seat inserts which eventually cause the valve seat inserts to wear out.

Moreover, over the course of the last decade, the demand for highly efficient engines with reduced carbon emissions and advancements in variable valve timing technology has also resulted in high valve seat tear as these systems hinder the lubricity of the exhaust gas stream. The highly conventional approach towards enhancing valve seat inserts durability is to significantly increase the magnitude of alloying using wear-resistant particles.

The automotive sector in East Asia, especially in nations such as China and Japan is expected to create lucrative opportunities for manufacturers operating in the valve seat inserts market. Some of the factors contributing towards market growth in East Asia include, availability of inexpensive raw materials, large-scale automobile production, and evolving manufacturing capabilities.

Further, the growth of maritime tourism in South Korea, Japan, and China has created pockets of opportunities for manufacturers owing to the growing demand for new crew boats. Some of the other factors shaping the growth of the valve seat inserts market include, growing demand for SUV’s in India, steady increase in disposable income, growing middle-class population, and onset of electronic vehicles.

Manufacturers Aim To Improve Their Production Potential to Gain Advantage

In recent years, manufacturers operating in the valve seat insert market are devoting resources towards product development, innovation, and expanding their product portfolio, in order to overcome the existing challenges within the industrial landscape.

Manufacturers are constantly seeking opportunities to improve their technological and production potential to gain a competitive edge in the market. Besides, a few prominent players in the industry are turning their attention towards the potential opportunities in the untapped markets.

The onset of the e-commerce businesses has emerged as an excellent distribution/sales channel for manufacturers operating in the industry and the trend is expected to gather momentum in the foreseeable future. At present, multiple manufacturers are offering their products on e-commerce websites including, IndiaMART and Alibaba.

Further, as downsizing of modern day engines continues, manufacturers need to focus on enhancing the lifecycle of valve trains and valve seat inserts by using wear-resistant materials. The growth of maritime tourism in regions including China, Mexico, and South Korea among others is further expected to bolster the growth for valve seat inserts. Further, for business development, manufacturers are expected to lean toward mergers and acquisitions with regional leaders to penetrate new markets.