As per a recently updated report by Future Market Insights (FMI), the global western blotting processors market size was valued at US$ 223.0 Mn in 2020 and is expected to reach a market valuation of more than US$ 235.5 Mn in 2021.

Growth predictions in North America remain positive owing to the increasing use of western blotting processors in various diagnostic procedures. The rising incidence of bovine spongiform encephalopathy (BSE), feline immunodeficiency virus (FIV), and hepatitis B diseases is giving tailwinds to growth in the U.S. Spurred by this, North America is expected to account for 35.0% of the global market in 2031.

The global western blotting processors market is likely to surpass US$ 235.5 Mn in 2021. It is expected to grow at a steady pace during the forecast period 2021-2031.

Increasing adoption of automated dry blotting systems under product segment is anticipated to drive the market growth. Demand for automated systems will continue rising owing to their ability to analyze various samples in a single trial. Through this, they enable minimizing the processing time and averting all the physical tasks except sample loading into the western blotting system. 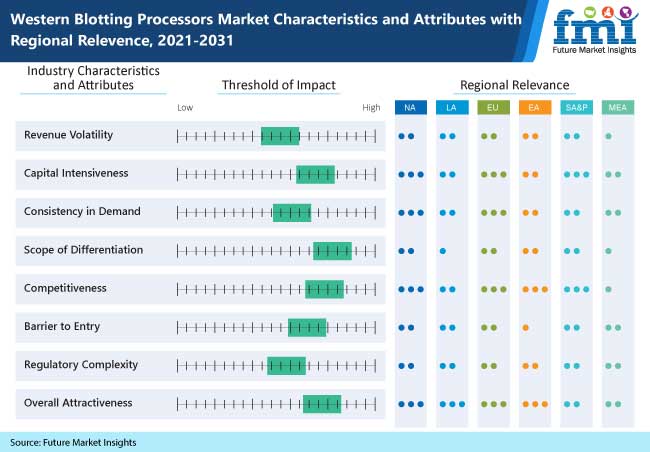 Medical diagnostics devices employed for identifying specific protein molecules from a composite mixture of protein samples in genetic science and proteomics is expected to fuel the market growth in the assessment period.

Key players operating in the market are adopting strategies of expansion, mergers & acquisitions and new product innovations to enhance their market position.

For instance, In June 2019, Thermo Fisher Scientific, a key manufacturer of scientific instruments, chemicals consumables and services to healthcare, announced the launch of its new product, iBright 1500 Imaging System Series for western blot and gel imaging.

Features including, automatic zoom, focus, sample rotation, high-resolution 9.1- megapixel camera are intended to help scientists identify subtle differences in samples and chemiluminescent blot to conduct their research efficaciously. This launch aided in expanding the product portfolio of the company.

Automated western blotting processors perform steps such as mixing of solution, washing of gel, and hence reduce the time required for protocol by using multifunctional reagents.

In North America, the U.S. is expected to be the dominant market for western blotting processors due to increasing incidence of HIV, BSE, FIV, and hepatitis B infections. According to the U.S. Department of Health & Human Services, 39,782 people received an HIV diagnosis in 2016.

The second dominant regional market for western blotting processors is Western Europe due to an increase in healthcare expenditure and funding by the government. In addition, there are several manufacturers present in the region, which address to an increasingly competitive market. The favourable reimbursement policies by the government for disease diagnosis are also expected to drive the growth of the market for western blotting processors in the region.

According to the statistics provided by the WHO, the prevalence of HSV-2 has increased and is generally higher among women than among men in the Pacific, Southeast Asia and South Asia with 0.3 Mn, 33.2 Mn and 27.5 Mn, respectively.  In addition, growing funding for agriculture research in India and ASEAN countries is also expected to drive the growth of the market for western blotting processors over the forecast period.