Banana puree can be a major ingredient in functional beverages and this directly benefits the global banana puree market. An incremental dollar opportunity of almost US$ 85 million for the period from 2017 to 2027 is waiting to be tapped in the beverage segment of the banana puree market. 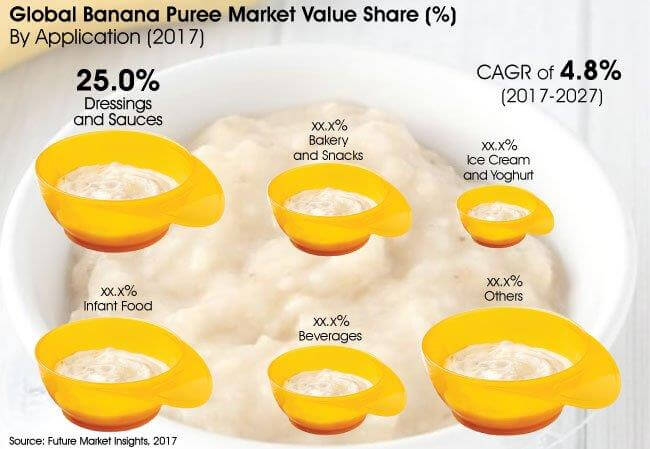 Consumers seek out beverages that deliver them maximum health benefits based on sound reasoning and facts. Unfortunately, they are quite sceptical of the tall claims made by prominent beverage manufacturers now and this can create a certain degree of hesitation and confusion concerning ingredients of functional beverages marketed aggressively. On account of the lower emphasis on product safety and labelling, false health claims by manufacturers to sell their wares have risen exponentially, posing a challenge to banana puree market growth.

Banana Cakes Include Banana Puree as the Main Ingredient

Banana cakes are very popular amongst European consumers in particular and these cakes are made from banana puree. The bakery and snacks segment had a market share of almost 12% in the global banana puree market in 2017 and is anticipated to lose 66 BPS over the course of the forecast period.

Cosmetics Europe estimates the Europe personal care and cosmetics market to have a value of US$ 90 billion at 2016 retail prices. Several cosmetic conglomerates such as Procter & Gamble, Unilever, and L’Oreal Group have invested sizeable funds in the region, and are introducing innovative products that have fruit ingredients.

For e.g. – Body Shop International, a subsidiary of L’Oreal Group has introduced a banana shampoo with banana puree as a key ingredient. Cosmetics is a part of the Others segment in the Western Europe banana puree market and is poised to have a volume of more than 2400 MT by end 2027.