Packaging accounts for approximately one-third of the world’s garbage. Increasing awareness about environmental problems related to disposal of solid waste and reducing the amount of waste generated are major reasons why food manufacturers are focussing on packages that can be recycled, in order to reduce the amount of waste. Edible packaging plays a key role in minimising packaging material wastage from a sustainable materials perspective. Packaging manufacturers and retailers have a key role in making valuable contribution to resolve these problems.

On the basis of region, the market is segmented into North America, Latin Europe, Western Europe, Eastern Europe, APEJ, the Middle East and Africa, and Japan. The North America region is expected to dominate the global edible films and coatings market over the forecast period in terms of value share. The North America edible films and coatings market is estimated to account for a relatively high value share of 33.8% by 2017 end, and is anticipated to register CAGR of 5.0% in terms of value over the forecast period. 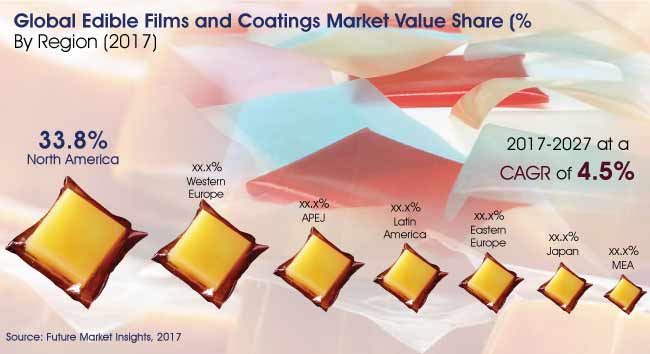 What is the edible films and coatings market size?

Which are the key edible films and coatings companies?

Tate & Lyle PLC, Ingredion Incorporated, and Cargill Incorporated are among the leading players in edible films and coatings market.