In this scenario, factors such as rapid rate of industrialization, emergence of new markets for hydrolysed vegetable protein, growing savoury ingredient market, growing focus on innovation and R&D, and stringent environmental regulations are projected to propel the growth of the global market at a 5.6% CAGR during the forecast period. The market is expected to account for little more than US$ 960 Mn by the end of 2027.

In this scenario, the market is forecast to account for little more than US$ 930 Mn by end of 2027. However, CAGR is projected to decline to 5.3% during forecast period.

Protein is used to build body tissue, making it the most essential component of our food. Whereas the supply for protein is relatively low especially in developing countries. For instance, around 6 Mn people particularly children died every year due to lack of protein in developing and under developed countries. Increasing demand for processed food in Southeast Asia is attributed to rise the purchasing power of consumers and economic growth in the region.

The hydrolysed vegetable protein has high demand as a flavour enhancer in sauces, soups, snacks, and ready-to-eat food products. For instance, to take an advantage of the opportunity Exter B.V., a Dutch company along with Thai Theparos, a local food company announced to establish a modern production facility for reaction flavours and vacuum oven dried HVP. 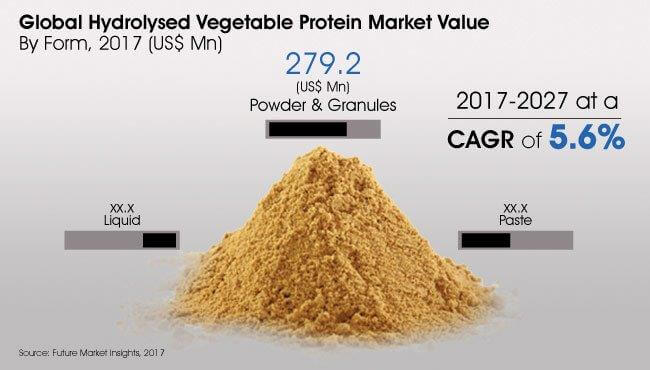 The consolidation of the textural food ingredient market is being driven by a number of factors. The long term success in the food ingredients market is contingent on constant innovation, global presence, negotiating power and the development of substantial production capabilities. The absence of the mid-sized players in the industry thus prompts various small scale companies to seek consolidation as they lack the financial resources and economies of scale that are necessary to compete with large companies.

Another major reason for the consolidation is the increased negotiation powers with food producers and commodity suppliers with multinationals such as Nestle and Kraft. The changing consumer’s tastes and preference has also stimulated growth in the textural food ingredients market.

The growing changing consumer demand and the lack of growth in developed markets in the recent years is driving the form segment to accelerate its innovation and new product development cycle to tap into faster growth categories.

The number of innovations in last few years within the food and beverage industry is been fueling at an accelerated rate and is expected to maintain the same during the forecast period. The plant protein ingredient is the new innovation which are available in fractionated concentrate and isolates. This whole food ingredients contribute texture, flavour, color attributes to the food and beverage final products.