Due to increase in penetration of television and TV services within rural areas as well as urban areas, the set-top box market will receive a boost all across the APEJ region. Disposable incomes are on a rise in developing economies – especially in India and China – and this is helping the set-top box market turnover to grow. In the Asia Pacific region, consumers are more aware about the features, quality and pricing of the set-top box, helping the market achieve greater growth and acceptability.

Increasing demand of 4K TVs is expected to provide support to the growth of the set-top box market in North America. It has been observed that the demand for IPTV based services has increased by 12% and operators are viewing IP-based services as an opportunity to differentiate their products. IP transmission recording features and higher storage specifications are anticipated to support steady revenue growth of the North America set-top box market.

In the Asia Pacific region, domestic production of set-top boxes by local companies is leading to an increase in price competition with global set-top box manufacturers. Emerging companies are acting as competitors to the established players in the market, thus making the smooth operation of this market difficult.

In China and India respectively, governments have taken initiatives to focus on high definition pictures, towards HD channels and decline in TV prices. This has led to the growth of the set-top box market in the APEJ region. Manufacturers in this region have also utilised e-commerce retailers such as Alibaba, Ali Express, Amazon, Flipkart etc., and this has propelled the growth of this market. 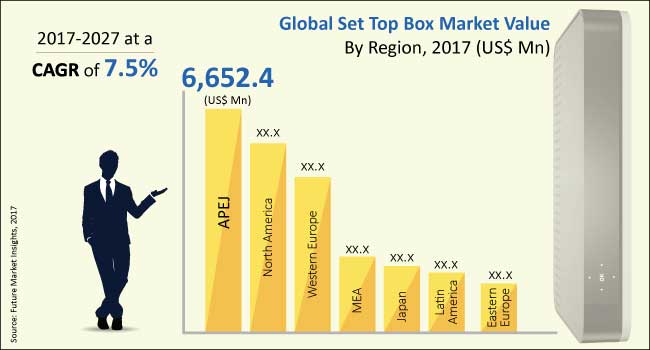