The rising tourism in Asia is expected to stir the demand for tissue towels from café’s, restaurants, and hotel chains for owing to the growing consumption after having the meals. For instance, as per UN WTO (World Tourism Organization), Asia Pacific is the second-most visited region in the world after Europe.

China has evolved as the fastest growing market, supplemented by rising incomes, appreciating currency, upgraded travel facilitation, and an ease of restriction on foreign travel. The rising tourism sector in Asia Pacific is paving way for opportunities for the manufacturers to capitalize on and provide the best and convenient solution for cleaning hands.

Asia Pacific excluding Japan (APEJ) remains one of the most prominent markets for food and beverage manufacturers globally. The region is home to the world’s leading food producers, importers, and exporters; and opportunities galore as it is home to some of the world’s most populous countries.

Satisfying the growing and evolving needs of such a large consumer base will entail new solutions. It is estimated that by the end of 2050, the global population will reach nearly 10 billion, and a large percentage of this population will be based in APEJ.

Policymakers are aware of the challenges and opportunities in APEJ’s food and beverage market, and there is a heightened pace of activity among players looking to enter or consolidate their position in this market.

Thinking of Asia Pacific excluding Japan as a homogenous demographic and concentrating only on volume sales can be a mistake, as consumers in many urban centers have the same set of demands and preferences as consumers in the U.S. and Europe.

As disposable incomes increase, and urbanization leads to massive alternations in lifestyle, demand for processed and ready-to-cook food is increasing in many cities of APEJ. The global trends related to healthy, organic, and natural are also being witnessed in the APEJ’s food and beverage sector, and manufacturers with a diverse portfolio have an increasing likelihood of succeeding in this marketplace. 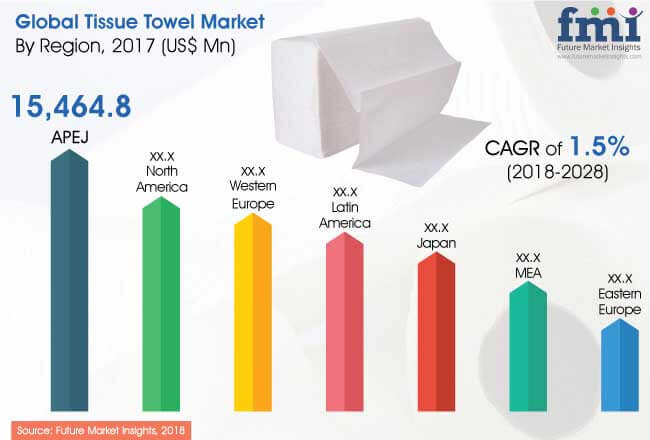 Fierce Competition Crops up Between North America and APEJ

The food and beverage industry in North America rests on a steady pitch, owing to the stability in consumer spending in the region. In the U.S., alterations in the Food Safety Modernization Act (FSMA) can mean that America’s food safety laws will focus more on prevention of food contamination, rather than responding to claims of food adulteration.

Rising awareness on the role of food in health and well-being has made consumers in the U.S. and Canada more attentive towards the ingredients used by manufacturers. The growing preference of healthy foods has made

The trend of acquiring smaller companies at lower cost is likely to continue in the near future. The food and beverage industry in North America is also adapting to new modes of delivery, benefitting the tissue towel market in return.

The global tissue towel market has been segmented into: