An Incisive, In-depth Analysis on the Workstation Market

This study offers a comprehensive, 360 degree analysis on the Workstation market, bringing to fore insights that can help stakeholders identify the opportunities as well as challenges. It tracks the global Workstation market across key regions, and offers in-depth commentary and accurate quantitative insights. The study also includes incisive competitive landscape analysis, and provides key recommendations to market players on winning imperatives and successful strategies.

Global Workstation Revenue to Expand at a CAGR of 9.8% During the Forecast Period (2016–2026), Driven by Rising Demand for 3D Animation Software and Increasing Demand of Workstations in a Wide Range of Applications

A workstation is an advanced computer designed for scientific and technical applications. Workstations are professionally designed for high-end user applications, including digital content creation, finance modelling, scientific and software engineering and others. Workstations can run multi-user operating systems and feature an array of independent disks, SSD and optimized GPU.

Personal computers are majorly used for simple applications, such as word processing, e-mail writing and software presentation, etc. in a typical office. Workstations have been developed to manage critical tasks, such as computer aided design (CAD), number-crunching and video editing applications, where intelligent performance plays an important role.

Workstations have currently established strong presence in engineering and digital content creation (DCC) applications. In addition, increase in demand for workstations in software engineering applications to accomplish critical projects is being witnessed.  Workstations are majorly used for critical workloads which require advanced features, such as graphic cards and high end resolution.

Globally, tower workstation segment’s value share contribution to the overall market revenue is significantly higher than the contribution of the other segments. This can be attributed to strong demand for tower workstations in some developing nations for end-user application, such as digital content creation (DCC), finance/economic, scientific, software engineering and other commercial purposes. The tower workstation segment is expected to lose 780 BPS by 2026 as compared to that by 2016 end and account for 53.5% value share by 2026.

Currently, workstations are used across most industries in developed countries for tasks ranging from medical diagnostics to financial modelling. Workstations have become standard equipment for engineers, analysts, content creators and others owing to growing requirement for significantly high levels of performance, data integrity and visualization. This, in turn is, driving demand for workstations in the professional and business world.

Several players in this workstation market are investing in product launches & innovations, partnerships and acquisitions. For instance, in 2013, Dell introduced a new lineup of Dell precision mobile workstations with significant updates in terms of technology and processing power. In 2014, Dell collaborated with YETI Coolers, to enhance performance of its mobile Dell Workstations and run complex 3D modelling and simulation software.

In addition to this, FUJITSU recently came up with Celsius H760, an advanced CAD focused mobile workstation built around Xeon CPU and quad core Intel Skylake Core i7 for handling high-end business workloads in big organizations.

Global workstation market is categorized on the basis of product, operating system, application and region

Mac Pro and PC are lagging behind in the competition in North America as powerful new workstations from HP, Lenovo and Dell carrying highly advanced technology are gaining popularity. New advanced workstations for professional applications, video editing, and creation of VR content for headsets, including HTC Vive and Oculus Rift, are gaining popularity. The high computing performance and multi-software processing capability of workstations is also adding to their popularity in the United States. 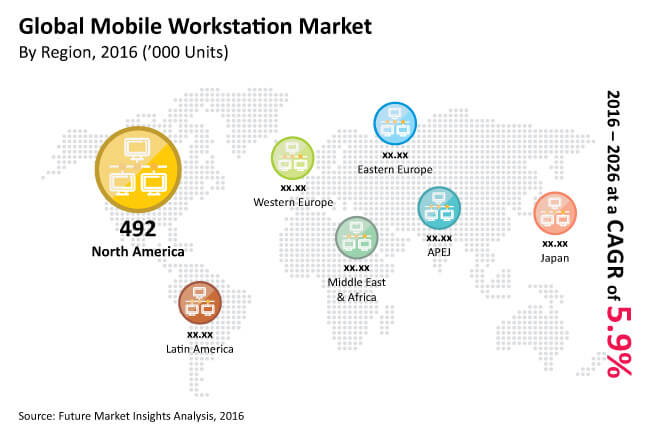 In country level analysis, FMI provides detailed analysis of major countries in the seven regions of the world: North America, Latin America, Eastern Europe, Western Europe, APEJ, Japan, and Middle East & Africa. In terms of revenue, the U.S accounted for largest market share in 2016 due to increasing adoption of high-end workloads in enterprises.

The next section of the report provides a detailed analysis of workstations across various countries in different regions. It provides the market outlook for 2016–2026 and sets the forecast within the context of the workstation market to include the latest product offerings as well as innovations in the market. This workstation market study discusses key trends within countries contributing to the growth of the workstation market as well as analyzes the degree to which the drivers are influencing this market in each region. Key regions and countries assessed in this workstation report include North America (U.S. and Canada), Latin America (Argentina, Brazil, Mexico, and Rest of Latin America), Western Europe (EU5, Nordic, Benelux and Rest of Western Europe), Eastern Europe (Russia, Poland and the Rest of Eastern Europe), APEJ (China, India, ASEAN, Oceania and Rest of APEJ), Japan and MEA (GCC, South Africa, Israel, Turkey and Rest of MEA).

In addition, it is imperative to note that in an ever-fluctuating global economy, we not only conduct forecasts in terms of CAGR, but also analyze on the basis of key parameters, such as Year-on-Year (Y-o-Y) growth, to understand the predictability of the workstation market and identify the right opportunities across the market.

In the final section of the workstation market report, we have included a competitive landscape to provide clients with a dashboard view based on the categories of providers in the value chain, their presence in the workstation portfolio and key differentiators. This section is primarily designed to provide clients with an objective and detailed comparative assessment of key providers specific to a market segment in the workstation market value chain as well as the potential players for the same. The audience can gain segment-specific vendor insights to identify and evaluate key competitors based on an in-depth assessment of their capabilities and success in the marketplace. Detailed profiles of workstation providers have also been included under the scope of the report to evaluate their long-term and short-term strategies, key offerings and recent developments in the workstation market space. Some of the key competitors covered in the report are HP Inc., Dell Inc., Lenovo Group Limited, FUJITSU and NEC Corporation.