A workstation is an advanced computer designed for scientific and technical applications. These are professionally designed for high-end user application including digital content creation, finance modelling, scientific, software engineering and others. Workstation can run multi-user operating systems and featured with redundant array of independent disks, SSD, and optimized GPU.

The media and entertainment sub-segment is also expected to witness a high growth rate during the forecast period as the media and entertainment industries are generating huge amount of data and are expected to create potential growth opportunities for centralised workstations market. Furthermore, the engineering & design sub-segment is expected to capture the largest market share of the global centralised workstations market and is expected to create an incremental opportunity of US$ 3,088.9 Mn between 2018 and 2028.

Based on OS, the centralised workstations market is sub-segmented into Windows, Linux, UNIX, and others. Growth in the demand for windows enabled PCs and increasing penetration of windows operating system are some of the major factors boosting the growth of Windows sub-segments. In addition, small and medium sized enterprises sub-segment is projected to exhibit the higher CAGR over the forecast period. Due to high investment cost for production and maintenance of on-premises data centers, the small and medium sized enterprises are adopting cloud based data center, which help to reduce the IT expenses. 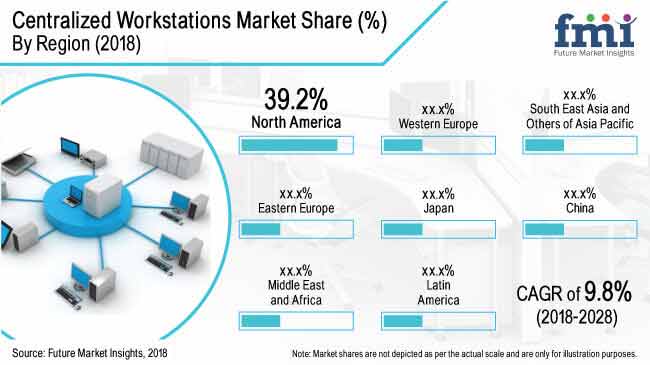 The region has witnessed the widespread deployment of cloud technologies in the past couple of years. These factors are fuelling the growth of the centralised workstations market in North America. The centralised workstations market is also expected to witness high growth rates in Europe and SEA (South East Asia) owing to major technological advancements and increasing digitalization in various countries of the region.

According to FMI analysis, long-term contracts with business partners are likely to increase revenue and new innovation strategies, which will enable centralised workstations solution providers to reach new growth markets. Moreover, the acquisition of businesses, technologies and products is also expected to help centralised workstations solution providers to accelerate revenue growth and create value for shareholders.