The continuously increasing number of terrorist organizations is giving rise to defense security systems across the world. In India, for security purposes, the Defense Research and Development Organization (DRDO) initiated a project named Airborne Surveillance Platform (ASP) to develop an airborne early warning system. This airborne early warning system is designed to detect threats from aircraft, ships, or any other vehicles at long ranges across the border.

On the other hand, humans can control manned airborne surveillance, but unmanned airborne surveillance is uncontrollable when any computer malfunction occurs. Drone warfare can cause collateral damages on civilian lives and property. Airborne surveillance devices are costly to produce and manufacture. Battery or energy limitation is another challenge in airborne surveillance. The capacity of drones to support cameras and motors is not sufficient. However, commercial drones can typically fly continuously for only around 25 minutes, which increases costs. Companies are manufacturing hydrogen fuel cells, which are lighter and more efficient than electric and lithium batteries. Nowadays, many countries are adopting airborne surveillance to provide aerial overview, security guard tours, thermal imaging, short- and long-range tracking, and crowd control, most importantly for defense purposes. The commercial drone market is rapidly growing in several industries such as transport, infrastructure, agriculture, telecom, security, media & entertainment, insurance, and mining.

Several developments are waving up unceasingly in the airborne surveillance industry, with reference to cyber-security and imaging, along with the proliferating growth rate of the market has drawn Future Market Insights’ interest in studying and analyzing the market, so that we can offer our clients with a solution which is a blend of quantitative and qualitative analysis of the airborne surveillance market, along with recent developments and innovations.

The airborne surveillance system market, at the moment, is experiencing noteworthy developments, driven by various vendors in the air, land, and naval industries. Vendors such as Saab, along with BAE Systems, are currently working on developing drones and radar technologies, wherein Saab is providing its GlobalEye AEW&C solution.

The companies are focusing on developing and manufacturing innovative products and radar technologies to enhance airborne, maritime and land surveillance. With multiple technologies being developed continuously, their integration and application with any system from any manufacturer has become very cumbersome.

GlobalEye AEW&C provides air, maritime, and ground surveillance to produce maximum operational performance in terms of detection capabilities and mission continuity. With extended range and enhanced performance, GlobalEye AEW&C is perfectly positioned to provide the most demanding operational requirements. GlobalEye AWE&C has the ability to detect and focus on low-observable air targets in heavy clutter and jamming conditions, and can also detect maritime targets, including small jet-skis. GlobalEye AEW&C also detects moving objects through long-range wide areas and provides radar images. GlobalEye AEW&C can fly up to an altitude of 6,500 ft with 11 hours of endurance. It consists of a self-protection system, voice communication, satcom, EO/IR sensor, datalinks, and AIS.

The system is reconcilable with active and semi-active homing missile systems, which makes operational availability high. However, multiple parallel paths are used in the design to maintain several sub-systems when the operation fails. To maintain servicing of the system, there are no high voltage or high power microwave parts used. The operating costs of Sampson are economical, since highly reliable transmitters are used.

These companies are continually evolving their portfolios with newer technological developments and upgrades. For instance, in December 2017, Airbus and Williams Advanced Engineering collaborated to explore potential areas in innovative technologies. 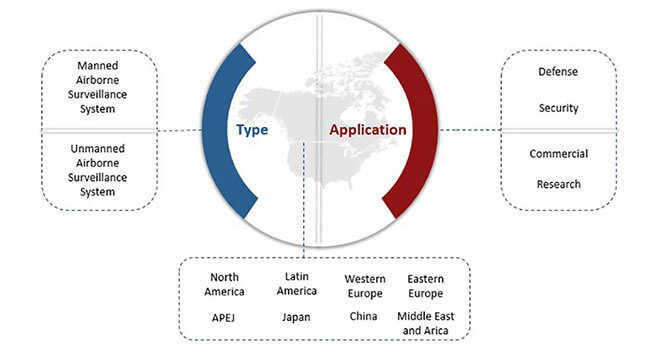 The U.S. is expected to hold a major share in the global airborne surveillance systems market because of the high demand from end users and technological advancements in the country. Asia Pacific and Europe are expected to follow North America, and Asia Pacific is expected to grow at a considerably faster rate during the forecast period, owing to increasing sales in the region.

The methodology utilized to asses and forecast this market involves both, vendors and consumers. The financial data (revenues) of key vendors is apprehended through secondary research sources, such as companies annual reports and investors’ presentations; industry association publications; paid data bases including Factiva, Avention, Orbis, and others; industry journals & magazines; research papers; and other relevant data available on the public domain.

Estimated market revenue is cross-validated by conducting primary interviews with various participants, majorly C-level executives or senior sales personnel of market players in the ecosystem. Stakeholders, including component providers, device manufacturers, technology providers, software providers, distributors and resellers, and system integrators, as well as service providers are interviewed to fetch the most relevant industry data. On the consumer side, end-user surveys across different industries and regions are performed to gather and analyze qualitative information of the market, from a consumer’s perspective.

The research report presents a comprehensive assessment of the market and contains thoughtful insights, facts, historical data, and statistically supported and industry-validated market data. It also contains projections using a suitable set of assumptions and methodologies. The research report provides analysis and information according to market segments such as geographies, application, and industry.

The report covers exhaust analysis on

The report is a compilation of first-hand information, qualitative and quantitative assessment by industry analysts, inputs from industry experts and industry participants across the value chain. The report provides in-depth analysis of parent market trends, macro-economic indicators and governing factors along with market attractiveness as per segments. The report also maps the qualitative impact of various market factors on market segments and geographies.

You will receive an email from our Business Development Manager. Please be sure to check your SPAM/JUNK folder too.