Exploration involves sampling services which include attaining and analysing reservoir fluid samples using various techniques, such as wireline formation testers, formation interval testers or modular dynamics testers (MDT). The development stage consists of ROV Drill Support services which involve maintenance of remotely operated vehicles for supporting exploration & appraisal and development of wells on oil & gas fields. Drilling support services include various services, such as removal of drilling slurry and measurement services. The production stage consists of the remaining services, such as operations and eventual abandonment of the site.

Focusing on research and development for sampling techniques as well as investment in product innovation has been the major focus of leading companies providing Upstream oil & gas services in the Asia Pacific region. For e.g., remotely operating vehicles that provide drill support services and provide oil & gas customers with light, medium and heavy ROVs that can be used for deeper exploration & drilling services have been introduced by Upstream oil & gas services companies in Australia and Indonesia.

Australia is expected to exhibit relatively higher CAGR over other countries in the APAC Upstream Oil & Gas Services during the forecast period. This is due to the fact that the nation has large reserves of coal, natural gas and crude oil. Australia is one of the top-three net exporters of hydrocarbons in the world. The country is a net exporter of natural gas and has the largest reserves of natural gas in Asia Pacific. As of 2014, the natural gas production in Australia stood at 2,214.9 Bn cu. ft. Backed by encouraging trade policies amongst the trans-pacific regions and countries as well as the high contribution of the services sector to the country’s GDP growth, Australia is indeed expected to witness high growth in the APAC Upstream Oil and Gas services market.

That apart, the Australian economy has favourable regulatory environment for local firms -- it has been ranked 10th in terms of doing business list by World Bank. Also, the foreign trade policy of Australia promotes trade enhanced trade linearization and open markets. The overall trade of Australia accounted for 42% of its GDP in 2015. Indonesia and Myanmar are considered to be emerging markets for Upstream Oil and Gas services in Asia Pacific with market participants devising market entry strategies for the same. 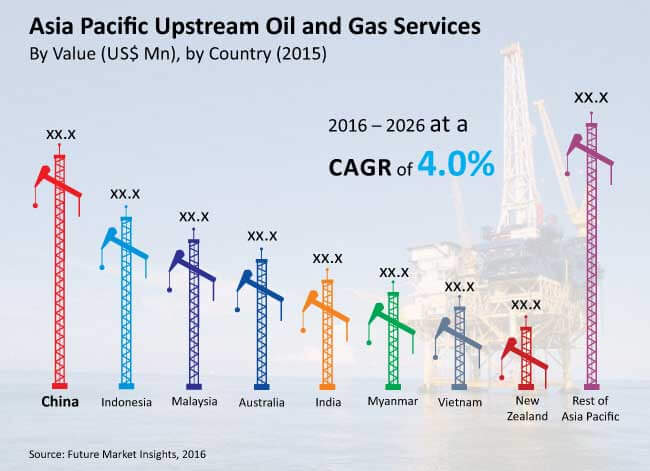 For e.g. Eni S.p.A operates through its subsidiaries, such as Eni Adfin, Ecofuel SpA, Eni SpA Fuel Centrosud, Eni Corporate University and Eni International Resources, in various geographical regions of the globe, including the Asia Pacific. On the other hand, the Murphy Oil Corporation operates through its three subsidiaries, Murphy Exploration & Production Company (Murphy Expro), Murphy Oil Company (MOCL) and Murphy Expro International. The upstream oil & gas services companies are investing in adoption of advanced technologies to strengthen their position in the global market.

For e.g., BHP Billiton Limited made an investment of US$ 900 Mn in 2014 and has employed seismic and geophysical surveys in its exploration of oil & gas basins in Western Australia. Another strategy of interest for expansion and consolidation of market footprint in APAC Upstream Oil & Gas services market has been that the companies are targeting their next line of business in greenfield specific projects as compared to existing sites. This is due to the fact that securing high value project sales orders lead to significantly high earnings. Recent project initiations in countries of Indonesia and Myanmar by leading APAC Upstream Oils & Gas services providers support this fact.

View All Reports from Oil and Gas