Car wax is a non-abrasive coating material which provides a layer of protection to the paint or previously polished surface. It is used to enhance the luster of the previously polished surface of the car and to protect it from UV rays, intense heat and contaminants, such as airborne pollutants, dust, acid rain, etc. Car wax is also used to protect the surface from the oxidation process and helps in avoiding corrosion. Car wax is generally classified under two categories: natural and synthetic car wax.

Natural car wax is manufactured using Carnauba leaves, which are blended with oils & solvents. Synthetic car wax is a formulated mixture of different natural waxes, oils and solvents, which include crude oil distillates, ethanol, petroleum and naphtha products. Carnauba wax is one of the key ingredients used in the production of car wax and is produced from the carnauba leaf, found mostly in the five states of Brazil. 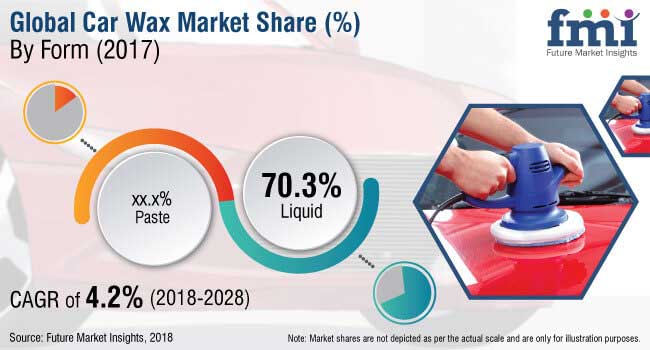 Car wax demand in different regions is totally dependent on the macro-economic factors affecting the Car Wax market in that particular region. In order to nullify the effect of macro-economic factors and competition from the other manufacturers, many regional and global players are focused on providing car care services to the end users by opening their own car care service centers in different regions. For instance, 3M has opened a number of car care centers in India, U.S and Europe and Turtle Wax Inc., has started car care service centers of its own in the U.S.

The Car Wax market is saturated with domestic players, which is a threat to the prominent players. To nullify this threat posed by the competitive environment, car wax manufacturers are focusing on entering into long-term supply-agreements with the service providers.

Some of the players reported in this study on the global Car Wax market are 3M, Sonax GmbH, Turtle Wax Inc., Future Development (Manufacturing) Ltd. KAO Chemicals Ltd, Mothers Polishes Wax Cleaners Inc., Chempace Corporation, Treatment Products Ltd., Darent Wax Company Ltd., and Northern Labs Inc.,  among others. Moreover, car wax manufacturers have been channelizing efforts towards strengthening their distributor and retailer network and are focusing on specific regions. This is expected to positively impact the Car Wax market in near future.