In terms of value, the global market for Cocoa is expected to increase at a CAGR of 3.4 % during the forecast period and is projected to account for US$ 14,572 Mn by 2026 end. Increase in demand for Cocoa can be attributed to its health benefits. Cocoa helps in regulating the symptoms of intense fatigue syndrome, provides protection against sunburn, reduces hypertension, improves heart health, etc. Cocoa is also a rich antioxidant source.

These benefits of cocoa are expected to drive the growth of the Cocoa market due to its growing end-use in varied industries, such as bakery, confectionery, beverages, pharmaceuticals, etc. The cocoa market has major end-use potential in pharmaceuticals and cosmetics markets.

Cocoa has proved to be one of the most beneficial cosmetic ingredients for promoting healthy skin and thus, is being widely used in the cosmetics industry. The cocoa market, by end use applications, can be segmented into confectionery, bakery items, cosmetics, functional foods, beverages and pharmaceuticals. Among the end use segments, the confectionery segment is expected to grow with a high growth rate of 3.6% during the forecast period.

The global cocoa market can also be segmented on the basis of different processes used to process cocoa. The basic types considered are Natural and Dutch. Natural Cocoa is one of the most commonly available cocoa types in the U.S. market. The Dutch cocoa powder is produced by washing cocoa with a potassium carbonate solution, which helps in neutralizing the acidity of the cocoa to a pH of 7.

The color of Dutch processed cocoa varies from light reddish brown to a darker shade of brown.  Among these two types, the Dutch type held the dominant share, i.e. about 73.9%, in 2016. Increasing awareness among consumers regarding the health benefits related with dark chocolate consumption is expected to give a boost to the cocoa market in future.

The global cocoa market is being driven by various important factors, such as rising awareness about associated health benefits of cocoa. The prominent factor driving the demand for cocoa is the availability of new varieties of chocolates. Easy availability of a wide variety of chocolate flavours and types of chocolates is resulting in increasing consumer base.

Different types of chocolates, such as milk chocolate, dark chocolate, cocoa powder, brownies and cocoa butter, are witnessing high demand. That apart, availability of multiple flavours, such as mint, vanilla, coffee, etc., are also contributing to overall revenue growth. Manufacturers are developing and launching new and innovative varieties, such as coated vegetables, fruits, nuts, cereals, etc. and popularity of such varieties is increasing steadily, especially in developed countries, thereby giving a push to the global cocoa market.

The demand for cocoa has been on the rise since the past couple of decades. Cocoa is expected to witness increasing demand from the global nutraceuticals and functional food industry as chocolate is one of the most common flavors for a variety of functional food products, such as snack bars, protein shakes, etc. as well as a very common base for nutraceutical products for flavoring.

Cocoa is primarily harvested for its purplish beans, which are basically used in cocoa liquor. Cocoa is considered to be one of the most important cash crops by the farmers in regions, such as Africa, Latin America and South East Asia. The cocoa produced in these regions provides livelihood to circa 40-50 million people. The liberation from the cocoa marketing system in 1990s led to liberation of cocoa marketing system, which meant prices in most cocoa producing regions are determined by the foreign or international prices.

However, cocoa produce is susceptible to pests and harsh climatic conditions, such as torrential downpour or extreme dry periods. In Cote d’ Ivorie, cocoa productivity has been largely affected by the political unpredictability in the region, which has restrained the supply potential of cocoa.

On the basis of regional segmentation, the cocoa market, at a global level, is segmented into North America, Latin America, Western Europe, Eastern Europe, Asia Pacific Excluding Japan and the Middle East & Africa and Japan. Among the above mentioned regions, the market in Western Europe is expected to register highest CAGR of 4.1%, in terms of value. 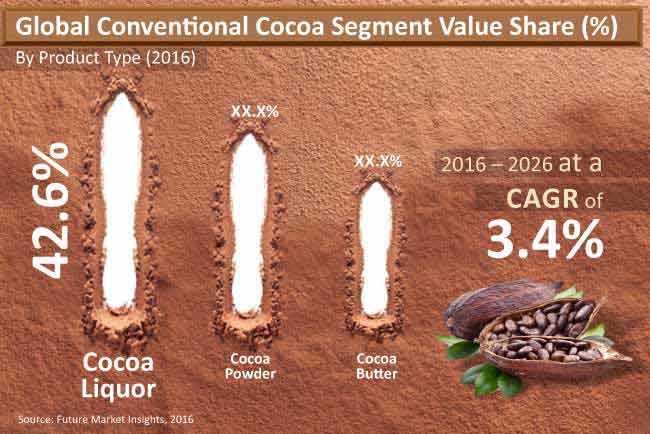 New and innovative products and flavours: