Global diabetic macular edema market is expected to have a princely growth due to the increasing cases of diabetes all around the world. With investments in research and development by major companies, the market is projected to witness a substantial rise during the forecast period. Some of the recent developments by the major companies are mentioned below.

Roche in February 2021 announced their phase III results of the bispecific antibody farcimab for the treatment of diabetic macular edema. Patients for trial were able to be treated every four months in DME and nAMD. Farcimab is the first eye injectable medicine to achieve this length of time between treatments. Farcimab was generally well tolerated in the four studies without any new unexpected safety signals. Farcimab offers treatment to two most prevalent causes of blindness, i.e. diabetic macular edema and neovascular age related macular degeneration.

Bayer in India in September 2020 announced the approval of their Aflibercept injection for intravitreal, a solution to treat diabetic macular edema. Intravitreal Alfibercept offers help among patients impacted by diabetic vision loss to maintain their vision and to continue participating in daily activities. The therapies like this reduce swelling and helps in restoring central vision. The company aims to provide access to treatment through their patient support program and also by financing partnership for patients.

Before the launch of Lucentis for DME treatment in 2012, the use of intravitreally injected medications was less common in North America and laser photocoagulation was the primary treatment. However, Avastin and Macugen were being used off-label for diabetic macular edema treatment since 2004. Launch of three new products in 2014 viz.

This sudden increase in the adoption of Intravitreal therapies can be attributed to the launch of low dose high efficacy corticosteroid implants for Intravitreal use. Uptake of Intravitreal implants by new patients as well as by patients previously treated with Intravitreal injections but who do not show any improvement, is expected to push the market for diabetic macular edema in the region.

Diabetic Macular Edema (DME) is a leading cause of blindness among the working age population in most developed countries. DME is one of the major complications of diabetes and DME patients utilise significantly higher healthcare resources than non-DME diabetic patients. As per a survey conducted by the University of Washington, the total yearly median cost for DME patients was reported to be US$ 14,678 and that for non-DME diabetic patients was US$ 6,801 in 2011.

Moreover, DME patients have to visit their physicians for at least 30 days per year in contrast to an average of 14 visits per year in the case of non-DME diabetic patients. The growing incidences of diabetes across the globe further increase the burden of DME. According to the International Diabetic Federation (IDF), 382 Mn people worldwide have diabetes and the number is expected to grow to 592 Mn by 2035.

Although control of diabetes is made a health priority in developed countries such as the U.S., much attention is not given to DME management and diabetes related caregivers tend to focus on the treatment of other diabetic complications. The major reason for this is the lack of effective treatment for DME. Even though anti-VEGF and corticosteroid therapies have changed the treatment paradigm, there exists a gap in patients’ clinical information among clinicians.

Furthermore, there exists an error in industry sponsored and independently run clinical trials. For instance, there are approximately 72 independent clinical trials going on for DME treatment, but most of them lack long-term results regarding safety and efficacy on new and combination therapies for diabetic macular edema. These factors are hampering revenue growth of the diabetic macular edema market in North America. 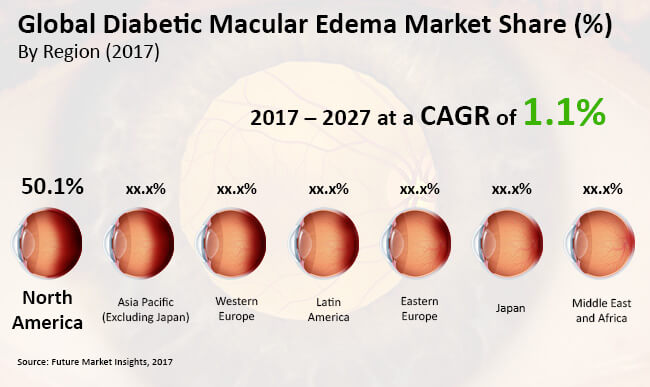 Western Europe is expected to be the most lucrative market for diabetic macular edema, with market attractiveness index of 2.7. Major players in the diabetic macular edema market, including Bayer AG and Novartis AG, are focussing on improving the sale of Eylea and Lucentis, respectively, in Europe.

Companies are trying to exploit the full market potential and get maximum returns on R&D till patents for their drugs are alive. North America dominated the diabetic macular edema market in revenue terms in 2016, and the trend is projected to continue throughout the forecast period.