Foley catheters, also known as urinary catheters, are flexible tubes that are passed through the urethra and bladder to facilitate easy drainage of urine. They are considered essential in the urology sector, aiding patients with bladder dysfunctions to drain urine into urine bags, and reducing urology-related complications. Foley catheters are predominantly used when an individual has difficulties associated with the release of urine such as urinary incontinence, urinary retention, or when a patient has undergone surgery related to prostate or genitals.

Moreover, several medical conditions such as spinal cord injuries, dementia, and multiple sclerosis, among others are prone to cause urinary disorders as a side-effect of medication and other complications. In case the severity of such disorders is beyond the control of medication, healthcare providers advise the use of foley catheters with the period of usage ranging from days to weeks, based on the severity.

Urinary Tract Infection (UTI) refers to an infection in any part of the urinary system, including the urethra, bladder, ureters, and kidney. According to the National Healthcare Safety Network (NHSN), UTIs are the most common urological diseases and they necessitate the usage of foley catheters. Furthermore, according to statistics compiled by the Centers for Disease Control and Prevention (CDC), 15-25% of hospitalized patients receive a foley catheter every year. Likewise, 5-10% of nursing home residents, representing over 75,000 to 150,000 individuals, require foley catheters. 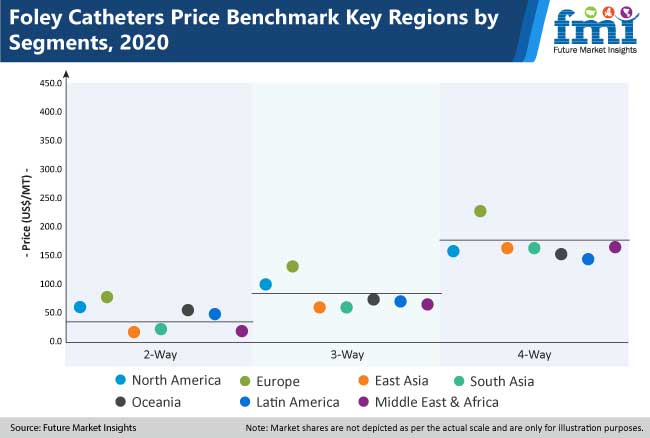 Moreover, approximately 2 million doctor visits and more than 250,000 surgical procedures performed annually in the US are attributed to BPH, which subsequently transmutes into the requirement for foley catheters. By the same token, neurological disorders such as multiple sclerosis, cerebral palsy, spinal trauma, and strokes also lead to urological disorders, thereby further fuelling the need for foley catheters.

Widening Base of Geriatric Population

The geriatric population has been identified as the major consumer demographic of foley catheters, on the back of the relatively high incidence of urinary infections in the population aged 60 and above. Diseases such as urinary retention, BPH, bladder obstruction, urinary incontinence, and prostate cancer, have become highly common among the aged population, principally men. In addition to the aforementioned diseases, the rate of asymptomatic bacteriuria (ASB) is exponentially high among older women, as compared to younger women.

According to the American Society of Nephrology (ASN), the prevalence of ASB is 1- 2% in young women and increases to 6-16% among women between 65 and 90 years of age, with the prevalence being the highest among women above the age of 90, ranging 22-43%. Moreover, the proportion of ASB is higher among institutionalized patients, affecting 25 to 50% of women and 15 to 35% of men, as compared to non-institutionalized. These conditions require long-term usage of catheters, thus driving the sales in nursery homes and home care settings as well.

The census of the World Health Organization (WHO) projected that the world’s population aged 60 years and older will cross the 2 billion mark by 2050, up from 900 million in 2015. This is expected to offer a tremendous growth opportunity to players manufacturing medical aids, including foley catheters.

Although foley catheters improve the patients' quality of life and health, the risk of catheter-associated infections is hampering the adoption to an extent.  According to NHSN, 75% of urinary tract infections acquired in the hospitals are associated with catheters. By the estimates of the MSD manual, the likelihood of contracting bacteriuria is 3 to 10% every time the catheter is attached, with 10 to 25% of people developing severe symptoms of urinary tract infections and some developing sepsis.

On a similar note, the CDC noted that urinary tract infections account for more than 40% of hospital-acquired infections, primarily caused by the improper usage of catheters. To curb the incidence of these infections, the CDC has issued guidelines pertaining to the usage of catheters for appropriate indications and advising healthcare providers to remove foley catheters when they are no longer needed. This has also negatively impacted the patients' perception and is likely to hold back the adoption of foley catheters across healthcare institutions to an extent.

North America is projected to spearhead the regional landscape of the global foley catheter market through the assessment period. The region's dominance is majorly attributed to the presence of a thriving healthcare sector in the US coupled with high medical spending in the region. Moreover, the prevalence of urinary tract infections in the region is comparatively high compared to other regions. For instance, a recent survey reported that urinary tract infection was the fourth most common infection, accounting for 12.9% of health care infections, affecting 67.7% of these patients.

The subsequent spending on hospitalization and treatment of these diseases will continue to fuel the sales of foley catheters. A report by NCBI revealed that more than 400,000 admissions were registered in the US in 2011 due to the primary diagnosis of urinary tract infections, resulting in hospital charges of $9.7 Bn. Although foley catheters are used by only a portion of these patients, the need for them continues to grow year-on-year. On the back of this factor, North America will remain the largest market for foley catheters.

Closely following the US is Europe, which is poised to remain the second most lucrative region through the assessment period. Akin to North America, the growth of the region is driven by the soaring prevalence of urinary diseases and the support of the governments to develop novel medical aids. A survey by WHO found that a significant portion of urinary infection deaths is associated with indwelling catheterization. Indwelling catheterization extends the hospitalization of the patients, resulting in a direct cost of €2 Bn for National Health Services. This has instigated the need for highly effective catheters with minimal side-effects.

To eliminate the deaths and cost, healthcare bodies in the region have mandated period replacement of catheters, thereby propelling demand for a higher number of units in hospitals and nursing centers. Backed by these facets, Europe will remain the second most lucrative region.

Asia Pacific - comprising East Asia, South Asia, and Oceania - is posed to hold a prominent share of market value, owing to the growing burden of urinary diseases in the region. Factors such as the high prevalence of hospital-acquired infections, rising awareness among patients and medical professionals, and increased spending on medical hygiene are also anticipated to give a major boost to the market in economies such as China, India, and Japan, among others.

Moreover, the region is highly populated with people aged above 60, who are the most vulnerable to urinary infections, which compels the usage of foley catheters. In the years to come, China is expected to be home to the world's largest base of geriatric population, which in turn, necessitates foley catheters for easy drainage of urine.

On the basis of material, both latex and silicon-based foley catheters hold a share of near-equal proportions with the former accounting for a slightly higher share. Latex-based catheters gain an edge over their counterpart, on the back of their coatings of hydrogen silicon, silicone elastomer, and PTFE Teflon material. These materials aid in lowering urethral irritation, encrustations, lower surface friction, and improve the overall comfort of the patient. Likewise, the demand for silicon-based catheters will remain high, backed by its longer life-span, large diameters, and low risk of urinary tract infections.

By indication, urinary incontinence and urethral stricture are projected to cumulatively account for over half of the market value, with the former holding more than 1/3rd of global value. This is attributed to the high prevalence of these diseases across the world, with urethral stricture affecting nearly 229 to 627 per 100,000 men in the US alone. Similarly, chronic obstruction and neurogenic bladder are forecasted to collectively hold a quarter of global value, backed by the rising incidence of these conditions.

Hospitals will continue to channel the majority of revenue, representing a share little below 3/5th of total market value. The segment's dominance is attributed to high reliability and an increasing number of hospitalizations year-on-year. Along similar lines, long-term care facilities will also remain a crucial end-use segment, with over 8 Mn people in the US seeking services in long-term care facilities.

The development of new product designs has been recognized as the major growth strategy adopted by market players to stay afloat amid cutthroat competition. On a similar note, restricting the prevalence of catheter-associated infections will remain at the core strategy of innovations as manufacturers direct their efforts towards innovative designs. On these lines, an American medical technology manufacturer, C.R Bard, employs silver-ion and antimicrobial coatings to its product line of foley catheters to eliminate the incidence of catheter-associated infections when used for long periods.

Besides, manufactures are seeking approvals of regulatory bodies to boost their revenue prospects and brand visibility. On this premise, Safe Medical Design Inc., a US-based organization, procured FDA approval for the commercialization of its new product, signal catheter. The catheter has been designed to reduce urethral trauma as a result of premature balloon inflation during placement. Such innovations and approvals will continue to boost the growth of the market.