Inflatable tents are also referred to as air tents. These tent uses inflatable beams and are pumped up to provide the structure with or without the support of an air-compressor. These tents create appropriate conditions to stay in remote areas.

Inflatable tents are also used to create proper living conditions over unstable ground. Currently, remote field operations require these tents and thus, demand from end-use industries, such as military, commercial and personal, is high as these can also be used as deployable military shelters.

The commonly used shape is tunnel and the material is Poly Cotton. The personal segment covers trekking and camping activities and consumers’ increasing desire for close-to-nature experiences has been driving the growth of the market. The self-erecting inflatable tents are the commonly used type.

The concerned market, since its inception, has evolved as a high value market and is witnessing healthy growth rate in the current scenario. It is expected to witness robust growth during the forecast period and military and personal segments will be the driving forces behind the growth of this market.

The concerned market uses Polyvinyl Chloride, Poly Cotton and Nylon as raw materials. The scope of the market under this research study covers military, commercial and personal end-use applications. This report only covers the sales of new inflatable tents and rental business; buy-back tents and sales of used inflatable tents have not been considered. The global inflatable tents market also does not include the cost involved for custom coloring of inflatable tents, air-compressors and heating or AC systems.

The global market is estimated to be valued at US$ 724.3 Mn by 2018 end and reach US$ 1,496.0 Mn by the end of 2028 while expanding at a CAGR of 7.5% over the forecast period. The global inflatable tents market is anticipated to represent significant incremental opportunity between 2018 and 2028 and thus, is expected to be a high volume - high value – high growth market. 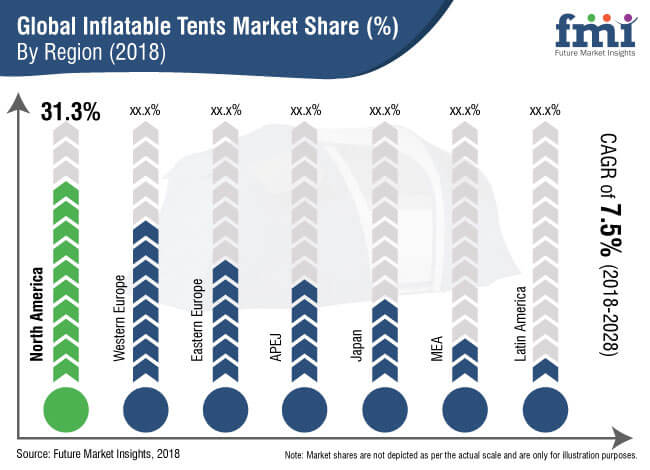 The global market is expected to witness steady growth rate over the forthcoming years. The manufacturers of inflatable tents have been gaining momentum in recent years as camping activities have increased over the years. The traditional pole tents business is witnessing a slow growth trend, which is pushing the sales of new inflatable tents. Rising adoption of inflatable tents made from PVC and Poly Cotton is being witnessed in the market.

Growing investments in agriculture and horticulture in European countries is also supporting the growth of concerned market. The growth in the inflatable tents market is fueled by increasing military spending and investments for overseas troop deployment by the USA, the U.K., China, Russia and Germany. The number of military bases is rising due to political factors and the US is deploying troops in countries where terrorists have major influence.

In addition to that, rise in GDP per capita income has positively influenced people to explore remote places with camping and trekking options. This has also been creating opportunities for the manufacturers of inflatable tents.

These players are key participants in the global inflatable tents market and most of the players have strong presence in more than 2 or 3 regions. In addition to this, there are other manufacturers who are exporting inflatable tents to Asian and MEA regions. In recent times, collaborating with regional distributors to enhance market presence has been an important strategy. However, some players are offering low-cost traditional tents in developing economies, which is negatively impacting the growth of the concerned market.

Furthermore, low awareness about these tents in developing economies might hamper the market growth. This is a major concern of the key manufacturers across the world. However, collaboration activities by large players will drive the end users to adopt to inflatable tents.

Walk In Cooler And Freezer Market