2021 Analysis and Review: NVMe over Fiber Channel Market by Enterprise Size – SMEs and Large Enterprises for 2021 – 2031

Newly released data on NVMe over fiber channel market indicates a 22% y-o-y growth in 2021. NVMe SSD will continue to have the largest market share among product types. Growth in the segment is expected to unfold at a little below 30% CAGR over the course of the assessment period. 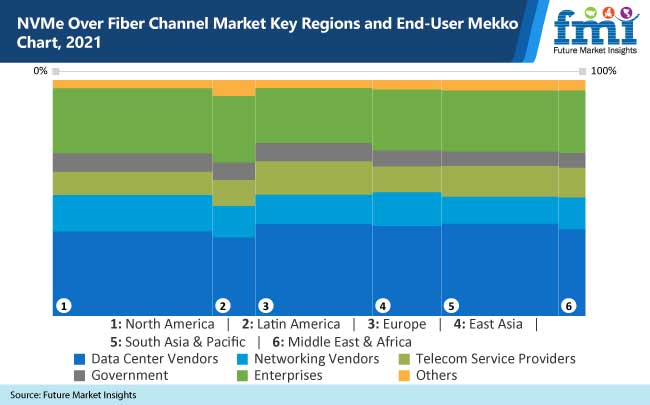 Initially, traditional SSDs were used more commonly across various applications. However, with the introduction of NVMe SSD, there has been a huge rise in switch towards NVMe SSDs. One of the major differences between SSDs and NVMe SSDs is that traditional SSDs store data with the help of integrated circuits whereas, NVMe is an interface used to access the data which is stored, at a much higher speed.

NVMe is more progressive than SSDs. It is therefore better encrypted and faster than the traditional SSDs.  Consequently, the high demand for NVMe SSD are expected to drive the growth of the market on a global scale. The global market valuation is anticipated to reach over US$ 255.64 Bn by 2031.

In 2020, the amount of data created and replicated has touched a new high. With a huge rise in the data-generating devices such as wearable electronics, smartphones, connected devices, and others, there has been an exponential rise in data generation.

Moreover with the growing popularity of cloud computing and Internet of things, there has been a massive rise in the overall volumes of data captured, created, copied, and consumed globally. Furthermore, the volume of digital data generated over the next five years is anticipated to be much greater than the volume of data generated since the advent of digital storage.

With such massive rise in data generation, there arises a need for efficient data processing and storage tools and technologies. NVMe over fiber channel offers highly optimized storage solution while reducing the latencies. Owing to this, NVMe technologies are increasingly being used in SSDs, servers, and storage appliances, thereby driving the market growth.

Which Growth Strategies are Highly Sought-after among NVMe over Fiber Channel Providers?

Companies operating in the market are delivering NVMe compatible products and solutions proactively, to help end users maneuver through the ever-changing requirements.

With the technological advancements in NVMe, there has been a rise in use of NVMe technologies in SSDs, servers, and storage appliances. Companies have been working with software development teams to cater to their demand for customization, aimed at meeting their frequently-changing industry specific requirements.

Why is the Demand for NVMe over Fiber Channel Surging in the U.S.?

The U.S. will emerge as the largest market for the NVMe over fiber channel in North America, due to the strong presence of providers such as Intel Corporation, Cisco Systems, and IBM Corporation.

Is Germany a Lucrative Market for NVMe over Fiber Channel?

The market in Germany is anticipated to be valued around US$ 17.5 Bn by 2031. In recent years, many SMEs in European countries including the U.K., France, and Germany are deploying NVMe over fiber channel products owing to the growing demand for reduced latencies and improved response times as compared to the traditional SSDs.

Germany, UK, and other countries in Europe are projected to observe significant amount of growth in the market for NVMe over fiber channel due to the changing dynamics of computing for the developers of tablets, notebooks, and laptops. Moreover, there has been a rise in emphasis on saving the time of consumers by speeding up data transfer. Owing to this, the demand for NVMe over fiber channel in the Europe market is anticipated to rise significantly in the coming years.

What is Driving Demand for NVMe over Fiber Channels and Services in China?

China, Japan and South Korea are offering growth opportunities for NVMe over fiber channels owing to the rising number of internet users coupled with growing popularity of digitization across East Asia.

In the wake of this pandemic, there has been an increase in demand for digitization to run businesses across the globe. Growing need for prompt communication for efficient functioning of businesses has resulted in generation of huge volumes of data which is further responsible for driving the growth of NVMe over fiber channel deployment.

Moreover, the companies operating across China are focused on implementing advanced digital technologies and products in order to cope up with rising data generation and reducing latencies, in order to improve the business efficiency.

How are NVMe over Fiber Channel Sales Faring across India?

The market in India is anticipated to witness growth in revenue from around US$ 882.3 Mn in 2020 to US$ 12.81 Bn by 2031. The demand for NVMe over fiber channel has increased rapidly across various industry verticals in major economies of South Asia and Pacific including India, Singapore, Malaysia, Indonesia, and Australia and New Zealand, which has created growth opportunities for the market.

Moreover, in India, there has been a significant growth in the adoption of NVMe over fiber channel in the fields of IT & telecom, BFSI, and healthcare, among other industries. The growth can be attributed to the increasing number of internet users due to the rise in digitalization in the region.

The demand for NVMe over fiber channel is projected to exponentially grow as small and large enterprises seek efficient storage and processing of data. Furthermore, rapid growth in the enterprises end-user segment is further expected to drive the market.

What is the Market Share of NVMe SSD over Fiber Channel?

However, NVMe SSDs are anticipated to hold the largest share of the market and were presented into the market as a storage device that provides reduced latency and faster read/write operations as compared to the HDDs. NVMe is an interface that was designed specifically for SSDs, and NVMe SSDs were introduced to provide better data storage and processing operations, and the lowest latency possible when compared with HDDs and traditional SSDs

NVME over fiber channel has registered 58% higher IOPS speed and 34% lower latency, which clearly states the advantages of the NVME over fiber channel application. The NVMe SSD also provides improvement in CPU performance, faster data movement, and increased operational efficiency of the complete system. These benefits of solid-state drives are providing more traction to the segment in the market.

What is Pushing Demand across Large Enterprises?

The growth of the segment can be primarily attributed to the growing demand for efficient data processing solutions from enterprises, data center vendors, and telecom service providers. However, small and medium enterprises segment is expected to grow at the highest CAGR of 24.9% over the forecast period.

Why is the Demand for NVMe over Fiber Channel Rising across Enterprises?

In terms of end user, the market is segmented as data centers vendors, networking vendors, telecom service providers, government, enterprises, and others. With the growing popularity of internet and automation across all industries, there has been rise in demand for NVMe over fiber channel in data centers and enterprises.

The data center vendor’s end user segment is dominating the global NVMe over fiber channel and it is estimated to account for 37.4% of the total market value share by the end of 2021. With the growing popularity of high speed data transfer and increasing implementation of advanced technologies across the globe, there has been a simultaneous rise in demand for NVMe over fiber channel as well.

Companies offering NVMe over fiber channel are aiming at innovation and strategic partnerships with other software vendors in order to expand their portfolios while addressing the demand of an expanding customer pool.

Introduction of new solutions and services and strategic partnerships are key strategies adopted by the top players in the NVMe over fiber channel landscape. Solid investments are being made in research and development segment by the global players in the market which is expected to provide substantial market developments.

The inclination of established players in the market happens to be towards the development of advanced memory technologies to fulfill specific requirements of the customers, cultivating the demand for innovative and advanced products in the market.

NVMe over fiber channel providers are also focusing on entering into partnerships with technology and digital solution providers to target new innovations within the market. The strategy helps companies to broaden their geographic reach with additional service portfolios.