Advancements in Pain Management and the Rising Prevalence of Acute Pain

The rising prevalence of lower back pain, neck pain, headache, acute migraine, and other acute pain conditions is boosting the market for over-the-counter pain medication. According to a survey conducted by the National Center for Biotechnology Information, over 80% of the population experiences episodes of acute pain conditions in their lifetime due to continuous sitting, sports and activities, sudden falls, other health conditions, lifestyle, hygiene, etc.

The most commonly used over-the-counter pain medication for relief are non-steroidal and anti-inflammatory drugs, which can cause potentially fatal adverse effects such as stomach bleeding and ulcers. According to the American Gastroenterological Association, in the U.S., more than 30 Mn people are using NSAIDs every day for pain relief from headaches, backache, rheumatoid arthritis, and other acute conditions.

It has been observed that there is a lack of proper guideless and awareness among a large percentage of the population regarding the dosage of over-the-counter pain medication and the manner in which they should be taken. A large number of patients are consuming acetaminophen for almost all types of chronic and acute pain, and thus suffering from its adverse effects and predisposing themselves to serious complications associated with ill self-diagnosis and self-medication.

The growing aging population is at a high risk of chronic pain disorders. During the aging process, several physical changes take place, which can impact the processing of pain among the population of this age group. Pain occurs due to several reasons such as reduced mobility, falls, and evasion of activity, sleep impairment, anxiety, and depression. In the United States, the Institute of Medicine stated that the prevalence of pain has been increasing among all age groups, but has been consistently the highest among the aging American population.

According to the American Gastroenterological Association, more than half of the stomach bleeding cases and ulcers are associated with NSAIDs. The long-term usage of NSAIDs is also likely to lead to heart and stroke risks, kidney failure and/or high blood pressure. An overdose of acetaminophen can lead to liver failure and possibly death.

A heavy dosage of acetaminophen can also lead to kidney disease, GI bleeding, stroke or heart attack, and/or high blood pressure. Taking drugs for an extended time period, higher consumption of drugs than the recommended dosage, taking drugs in combination with other pain medications, and/or combining NSAIDs with alcohol increases the risk of stomach and intestinal bleeding, other adverse effects, and serious complications.

Majority of patients taking over-the-counter pain medication are more concerned about reducing pain and are unaware of the adverse effects. Popular pain-relieving medicines, such as Paracetamol, Aspirin, Ibuprofen, etc., are easily available, and do not require a prescription from physicians. However, they are very effective for reducing pain only if taken as directed. 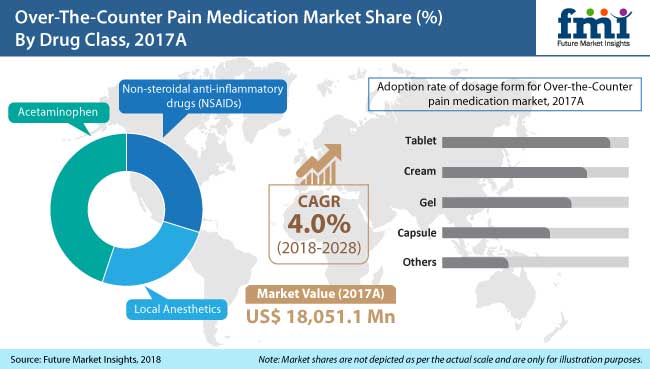 Further, qualitative factors impacting the over-the-counter pain medication market, such as awareness regarding over-the-counter pain medication and availability of drugs, average prices of drugs, key regulations and others, were studied. The calculated data was further validated through primary research methods, such as telephonic interviews, surveys, in-person interactions and viewpoints of experienced analysts & secondary research resources, such as databases, trade journals and verified paid sources.

Based on drug class

Based on route of administration

Based on dosage from

Based on distribution channels