The global paint cans market is anticipated to accelerate at a moderate CAGR during the forecast period. A significant boost to the paint cans market is from the fact that packaging is no longer about the look but about the value of convenience, transportation, and storage. As a result, steel and aluminium remain highly sought-after materials for the manufacturing of painting cans.

Growth in the demand for spray paints has been recorded in the automotive industry, on the back of the increasing inclination for personalization and maintenance activities. This could act as a deterrent to the growth of the paint cans market during the forecast period.

In addition, the possibility of air transmission of coronavirus reestablished trust among individuals regarding paint cans away from spray paints, which is likely to uphold the sales during the forecast period. However, the demand for paint could decrease during the pandemic, owing to the lockdown imposed in different geographies across the world.

Besides this, the rising demand for paint cans from the eCommerce portals further require cans that are transportation-friendly. Since paint cans are more convenient to transport than their counterparts, their sales are likely to gather momentum.

Also, numerous developing countries are involved in the export of paint cans to developed countries, which could increase the demand for sustainable packaging materials. As a result, paint cans will find high relevancy.

Among the other crucial growth drivers, an increase in the construction, as well as industrial spending, could lead to an uptick in the sales. Besides this, manufacturers are trying to use different materials to offer the convenience of packaging to the end-use industries. Among the other materials, steel and plastic can be recycled, and so, they are highly used for the production of the paint cans.

Despite the drop in the demand during the influence of COVID-19, the paint cans market is likely to return to normalcy once the vaccine is developed and distributed.

Metal Cans to Remain the Preferred Choice for Paint Packaging, Despite Its High Cost

Paint cans are the most dominant form of paint packaging, across the globe. Over the years, paint cans have been available in a variety of configurations, wherein metal has been the most used material. Until the early 2000s, metal paint cans used to account for more than 90% of the total containers used to store paint. However, plastic and hybrid paint cans started to witness growth in popularity causing a significant shift in consumer preference for plastic paint cans.

In the coming years, implementation of stringent rules and regulations against the use of plastic are expected to cause stagnation in the plastic cans market. In addition, there are paint packaging solutions other than paint cans made out of plastic such as bottles and pails, which are also available in the market. FMI analysis indicates that despite the above factors, metal cans will continue to be preferred for the next 10-12 years owing to their high recyclability and durability.

Plastic paint cans lack the rigid build of their metal counterparts. During our analysis, it was found that while plastic industrial pails and cans are widely used, they are not likely to exceed their metal counterparts in terms of performance. Metal paint cans, specifically the ones that are made of steel or tin-plated steel paint cans are designed to be hard wearing. They are known to remain intact in some of the most demanding conditions.

In addition, there are a number of paints which cannot be stored in plastic containers. For instance, some solvent-based paints do not come in plastic paint cans as they can react with the plastic surface causing damage to both the paint and the can. 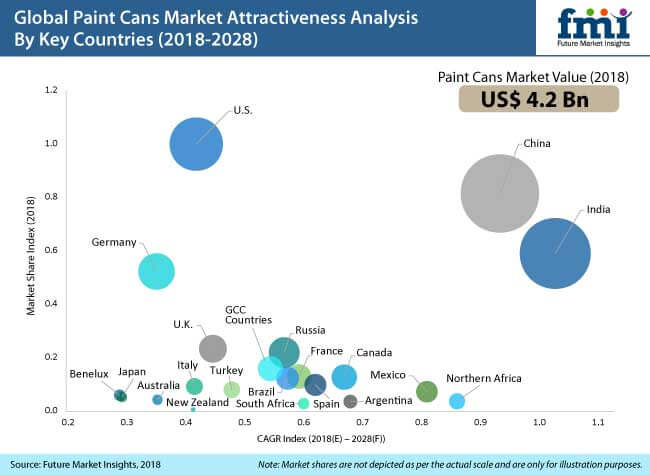 Emerging countries such as India and China, are expected to be significant contributors to the growth of the global and Asia Pacific market, during the forecast period. In 2018, India was estimated to have accounted for 11.1% of the total global paint cans market, by value. The cumulative emerging countries paint cans market is forecast to expand by 79% of its current value, by the end of 2028.

Europe’s construction industry has been a prime paint consumer and thus, an important market for pain cans manufacturers as well. It is more likely that Europe will represent a collective share of more than 60%, with South & East Asia, in the global paint cans market value estimated for 2019.

The intensity of competition is expected to be high in the market, during the forecast period. Currently, very small number of manufacturers of plastic paint cans are present in the market, and there is a very less likelihood of any new entrant in the plastic segment, barring the Tier 3 players. There have been several attempts by top players to work on the design of metal cans as they are not known to be very consumer convenient and are relatively heavier.

Companies such as Crown Holdings are working closely with manufacturers of paint cans to develop and innovate convenient technology for paint cans. Crown came up with their easy lid closure technology, which attempts to ease the handling of specialty packaging products and paint cans.