Easy access to high fidelity data network along with consistent speed enables a buffer-free experience to users, which is primarily responsible for driving adoption of OTT services. In 2017, household broadband penetration in the U.S. was approximately 82%.

Other Western economies such as France, Germany, and the U.K. are expected to witness a similar penetration pattern, while most emerging economies are anticipated to reflect even stronger growth rates over the next decade. Taking these growth rates into consideration, OTT services are increasingly becoming a viable option for content delivery.

North America will retain its reign in the coming years

Owing to the proliferation in demand for streaming video services (offering diverse content), the market in the region has witnessed the introduction of a few third-party mobile applications offering innovative OTT content (VoD) features. Leading content providers in the region are focusing on expanding their customer base by offering content through various channels, i.e., through apps on smartphones and through dedicated VoD services.

With the introduction of HBO’s dedicated VoD services on Apple devices, iPhone or iPad users are now able to access great swaths of original HBO content for a nominal subscription fee. This strategic alliance enabled HBO, Inc. decrease its dependency on cable TV providers and increase its customer base. 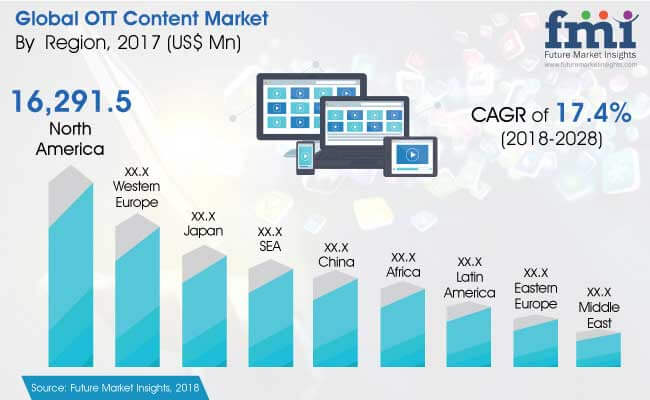 A major challenge that persists in this region is the OTT/VoD window. Any negotiations pertaining to cutting short this window have been scrutinized by theatre exhibitors and TV channels, stating that, any type of alteration in the policies to benefit multi-territory platforms, such as Netflix, could lead to the downfall of the film financing system in the region.

On the other hand, the launch of the 5G network in Japan across various circles is expected to improve the video streaming experience of Japanese users. Moreover, continuous development in the Internet service is expected to fuel the market through extended efforts in introducing 6G and 7G services in the country.

While this scenario is likely to provide access to networks with ultra-high speeds, it will eventually encourage widespread adoption of VOD services in Japan, in near future.

The global OTT Content Market has been segmented into: