Over the past few years, the global footwear industry has witnessed significant growth and is expected to expand over the forecast period. Nowadays, consumers are demanding for branded footwear due to its high quality.

They are also highly influenced by commercial advertisements, entertainment channels and others. India is the second leading producer of global footwear after China, and the latter dominates the global footwear industry.

Moreover, due to harsh weather conditions, the need for snow boots is increasing for the protection of the feet from cold weather.

The global snow boots market is projected to expand at a significant CAGR during the forecast period owing to automation in the footwear industry and an increase in the production capacity of snow boots to respond to the demand for mass standardised snow boots across the globe.

Moreover, the rapid emergence of organised sales channels, such as hypermarkets/supermarkets and specialty stores, for the distribution of snow boots is augmenting the growth of organised retail in developing countries, which is also among the factors that are expected to drive the snow boots market during the forecast period.

Over the past few decades, celebrity endorsements have always been an effective marketing strategy adopted by various marketers to endorse their brands and boost the interest of consumers in a particular product or a brand.

Nowadays, e-commerce has become one of the fastest-growing platforms for the advertisement of products. Therefore, various companies in the snow boots market are coming up with unique celebrity endorsement strategies, in which celebrities are endorsing their products online.

This is expected to help boost the sales of snow boots by influencing the fan following of these celebrities, which will further expand the popularity of different brands of snow boots as well as boost the global market share. 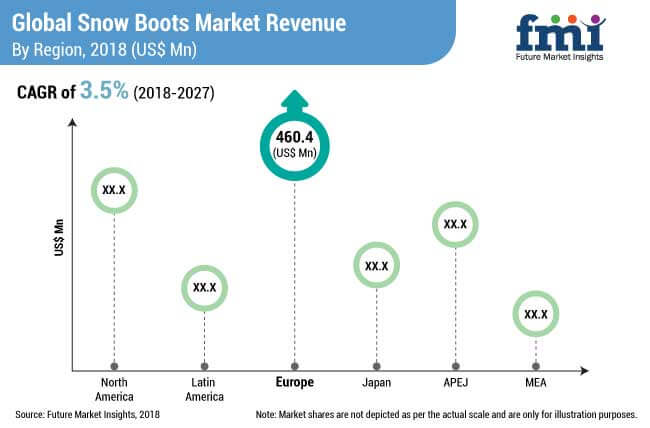 The women segment is estimated to account for a 49.2% value share in 2017. In the global snow boots market, the children segment is projected to register a prominent CAGR of 3.4% during the forecast period.

The hypermarkets/supermarkets segment has been estimated to account for a 28.8% value share in 2017, and is expected to register a CAGR of 3.3% during the forecast period in the global snow boots market.

Among these regions, the European market has been estimated to dominate the snow boots market in terms of value, and account for a significant revenue share of the market by the end of 2017.

Collectively, the North America and APEJ markets are estimated to account for a revenue share of over 46.9% of the global snow boots market by the end of 2027. The APEJ snow boots market is projected to exhibit a substantial CAGR of 4.4% over the forecast period.