As the COVID-19 spreads worldwide, strict social-distancing laws to contain the virus would have a profound economic impact on a range of businesses. The post-pandemic scenario is anticipated to reduce investor’s confidence, dealing a sharp blow to expectations for near-term growth. In addition to the epidemic's rapidly rising human toll, we are heading towards a period of severe deterioration in economic activity, and ultimately financial asset prices. In these difficult times, rapid and unprecedented policy responses to both combat and mitigate these declines are crucial for firms to achieve sustainable development.

The demand for sugar toppings has already registered a significant dip, attributed to reduced consumption of desserts such as pastries and cakes as bakeries have ceased their operations due to nation-wide lockdowns. This has impacted the supply chain of key sugar topping manufacturers. Companies must, therefore, devise solutions to prevent a downward spiral in their supply chains.

Sugar toppings are used in a number of ways at confectionaries. They are used on cakes and cupcakes as icing, and as sprinkles to enhance the cake's appearance. Consumption of clothes making is growing throughout the world. Confectioneries can be classified into two forms in which sugar is the main ingredient, namely sugar confectioneries and chocolate confectioneries. Overall, sugar confectionery accounts for 39 percent, and chocolate confectionery accounts for 61 percent of overall pastry intake. That ratio can vary from country to country. In countries with the increasing middle class, such as Brazil and India, and countries with historically low sugar consumption, such as China and Japan, confectionery consumption is on the rise.

North America is the Largest Regional Segment in the Market

These government-convinced factors disrupt the development of the United States sugar toppings market. The European Union is a leading beet sugar producer mainly in the European northern part. Northern France, Germany, United Kingdom and Poland are the most productive manufacturing countries. These regions are seeing an increase in demand and supply chains for sugar toppings. Growing Asian countries with their diverse production systems and consumption habits generate around 40 per cent of the world's total sugar.

There are certain factors such as rising demand for baked products and confectionery that are driving the global market for sugar toppings. The introduction of low-sugar toppings would increase prospects for the for the market’s expansion. This will fuel the demand for both organic and conventional sugar toppings.

In the coming years, the market is expected to gain from increase in consumer consumption of confectionery products. It addition to this, marketing of beverage sauces and breakfast syrups will pave way for growth in the APAC region. The rising awareness among consumers who are health conscious is likely to fuel the demand for organic sugar toppings.

Globally, the demand for sugar toppings is increasing at a rapid pace due the expansion of the retail sector, increasing disposable income and a rising trend towards gifting confectionery items. Rapid urbanization and population growth are predicted to drive business growth. The sugar toppings market has been gaining from fast paced lifestyle and the subsequently increasing demand for ready-to-eat food. Heightened interest in delicacies among consumers is likely to fuel the demand for both organic and conventional sugar toppings. 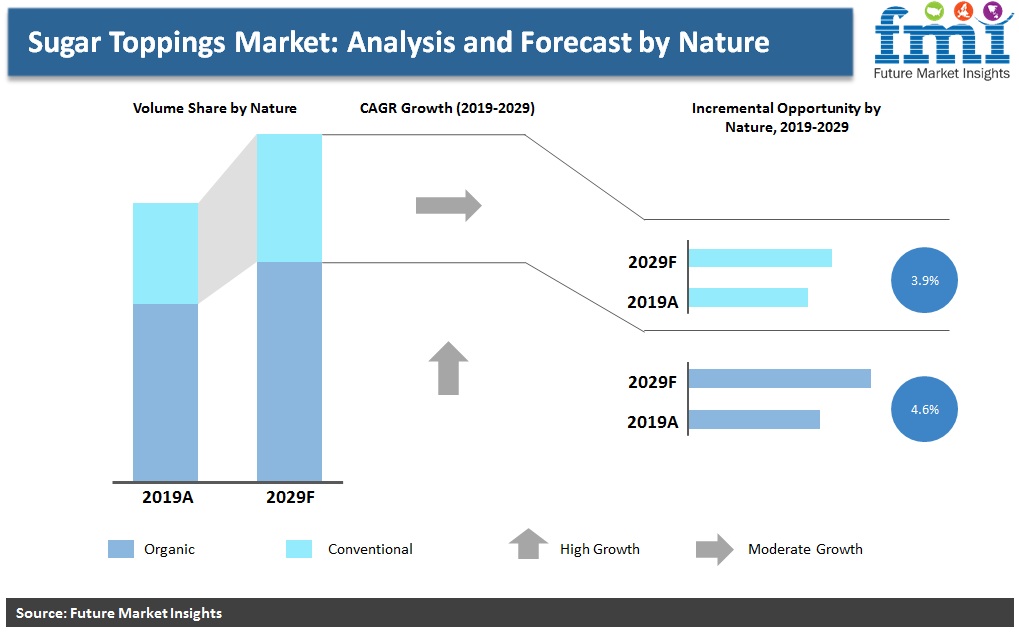