Sulphur bentonite has performed extremely well on soils across the globe. There has been substantial enhancement in oil content and yield of major oil seeds including soybean, rape seed, etc. Reportedly, the yield of canola increased significantly more than other cereals with the use of sulphur bentonite.

North America has been a major producer as well as consumer of sulphur bentonite. Canada is one of the leading producers of canola; therefore, extensive demand is expected to stem from the country. Also, the U.S. is expected to create substantial demand from the production of corn and soybean.

The agricultural sector has been the mainstay of many countries such as India, China, and Brazil. A major part of the GDP contribution of these countries comes from their agricultural output. Brazil is amongst the top 10 producers of major crops, cereals, and oilseeds. According to the USDA, Brazil’s soybean production was pegged at 119.3 million metric tons (mmt) in 2018. The country has also been a major consumer of conventional NPK fertilizers.

Latin America is among the highest rated sulphur deficient regions after Asia Pacific. Thus, there is great demand for sulphur-based fertilizers. Moreover, the use of sulphur bentonite has improved the crop yield for crops such as soybean, corn, and sugarcane by an average of 20%.

Mexico and Nicaragua have established partnerships and Colombia and Argentina plan to develop activities linked to the World Economic Forum’s New Vision for Agriculture initiative. Such initiatives are projected to drive demand for sulphur bentonite in the global market. 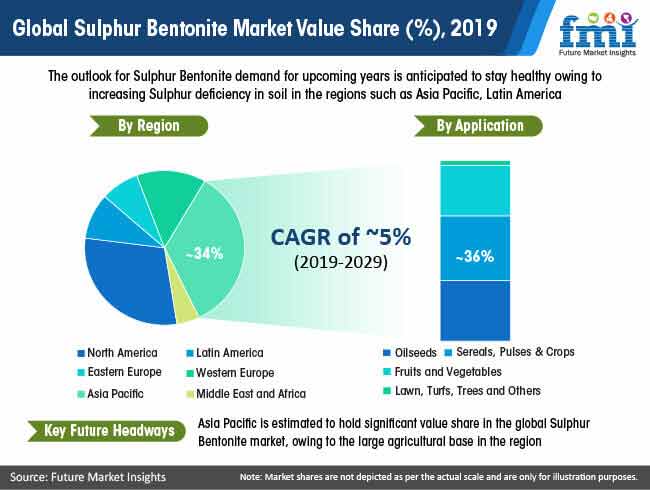 Growing emission regulations in EU countries have significantly reduced the sulphur deposition in crops below the standard requirements. Hence, there has been an increase in the need for more intense sulphur carriers such as sulphur bentonite.

According to the Sulphur Institute in the U.K., ~50% of the land area is sulphur deficient for winter wheat and rapeseed. Europe has also been a significant producer of oil seeds and the region has witnessed a significant increase in crop yield and cereals in France, Germany, and Spain. EU 28 are the largest producers of rapeseed, followed by Canada, China, India, and Australia. The yield has increased by 10-20% for oilseeds, legume, cereals, and forage crops. Moreover, the increasing rape oilseed production for biofuel increases the demand for fertilizers.

Demand Upsurge in Production of Oilseeds and Cereals

The study reveals that the application of sulphur bentonite in oilseeds and cereals will collectively account for the revenues exceeding US$ 100 Mn by 2029 end. Sales of Sulphur bentonite for pushing the yield of fruits & vegetables and lawn, turf, and trees will see modest growth throughout the projection period.

The market in Asia Pacific (APAC) will continue to lead its way in global sulphur bentonite landscape, followed by North America. China and the U.S. will spearhead these regional markets, respectively. India has also been showcasing lucrative potential for the growth of sulphur bentonite market owing to an upsurge in foreign and local investments in agriculture over the past decade.

Latin American market has been projected for a remarkable growth outlook, led by Brazil and Mexico. However, the market stakeholders in Latin America will continue to face challenges posed by high price point and dearth of local distributors.

On the flip side, specialty fertilizers, such as sulphur bentonite are still categorized as non-subsidized and are thus available on market at a premium price. In addition, APAC and Europe are dependent on other regions for import of sulphur bentonite, thereby adding to the expenses. This will continue to restrict market growth to a large extent in the near future.

Sulphur is considered as the fourth essential ingredient for plants, after nitrogen, phosphorus, and potassium. However, studies continue to reveal the sulphur deficiency across worldwide agricultural sector, particularly in fast developing economies such as China and India.

The global sulphur bentonite market is segmented in detail to cover every aspect of the market and present complete market intelligence to the reader.