Other companies are focussing on targeting technologically advanced emerging economies such as the Asia Pacific region with availability of sufficient capital base and skilled labour. Companies are entering into mergers and acquisitions to expand their product portfolio and market presence in the global market.

Companies are focussing on the development of new suture anchor devices to provide advanced tissue bone reattachment systems. Suture anchors are widely used for the treatment of orthopaedic injuries. Many research organisations are focussing on the development of new compositions of suture anchors with better advantages. For instance, Stryker’s Sonic Anchor that operates through ultrasonic energy to liquefy and flow into cancellous bone, was launched in 2016.

A growing number of strategic mergers and acquisitions among the key players in the global orthopaedic industry is another trend that is making a positive impact on the global suture anchor devices market. Top companies are focussing on expanding their market share through various strategic business models. For example, the Johnson & Johnson subsidiary DePuv acquired Synthes in 2012. Increase in medical tourism across the globe is another trend that is boosting the overall growth of the global suture anchor devices market.

Latin America in particular has been witnessing growing activity of medical tourism. Countries such as Costa Rica, Brazil, and Mexico are highly sought after medical tourism destinations. According to the Council for International Promotion of Costa Rica Medicine, Costa Rica attracted nearly 50,000 medical tourists (mostly from the U.S. and Canada) in 2012. Around half of these medical tourists travelled for dental procedures, followed by orthopaedics, weight loss surgeries, and gynaecology and plastic surgery.

Various predictable and unpredictable injuries are resulting in an increase in the number of musculoskeletal injuries. Increasing rate of sports injuries especially among women soccer players is creating robust growth in the global market for suture anchor devices. 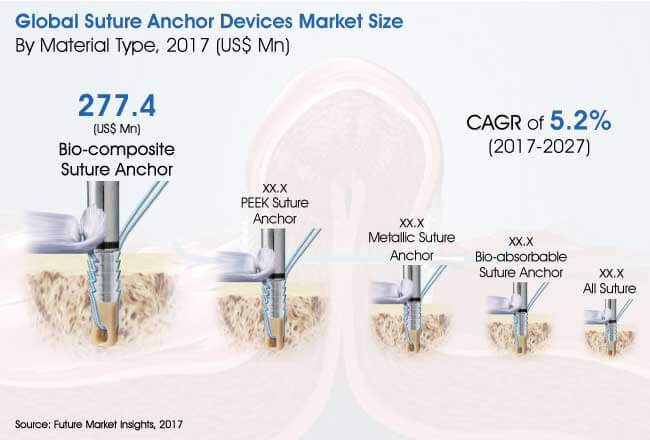