Several research institutes and producers have directed their attention towards the development of novel products for applications in genetics and molecular biology. For instance, terephthalic aldehyde is being used as a non-toxic and non-volatile gelatin membrane cross-linker as it augments the functional properties of the gelatin membrane. Terephthalic aldehyde increases the hydrophobic characteristics of gelatin by substantially increasing the liquid resistance capability (around 15-20 times).

Terephthalic aldehyde is also used along with bi-enzyme catalysts as a cross-linker in glucose bio-fuel cells, which leads to stable bonding of the catalytic structure. Moreover, in 2017, the terephthalic aldehyde-based chemo-sensor molecular system was blended and utilized for the florescent sensing of metal ions. The molecular system is highly sensitive to copper ions.

China, being the key regional market is struggling to retain both production and consumption

Terephthalic aldehyde has niche but important applications in the optical brightener and pharmaceutical industry. With the implementation of environmental policies in China, which currently dominates the terephthalic aldehyde production scenario, supply has reduced drastically in the global market. Further, as per industry sources, no significant product alternative or environment friendly commercial production method is available as of yet in market. Though, several clean and eco-friendly processes have been proposed, however their commercialization has become a need of the hour.

The protocols have affected the competitiveness of the domestic industries and have damaged the economic performance of the industry, leading to a rise in the production cost leading to lower productivity or profitability. This is anticipated to lead to a worldwide shortage in the supply of terephthalic aldehyde as China is the main hub for the production of the chemical. Based on the existing scenario of the market, there are two possible future perspectives, predisposed by concerned environmental policies. 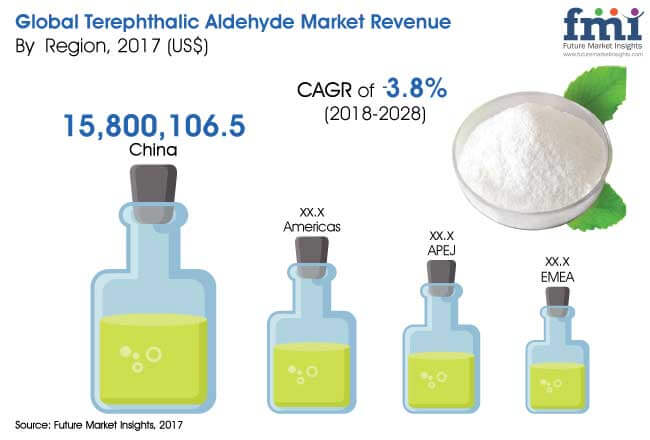 Economically, terephthalic aldehyde is mainly manufactured by the chlorination and subsequent hydrolysis of p-xylene; the production process involves highly toxic chlorine gas for chlorination and requires a large volume of nitric acid during the oxidation process.

Strict environmental regulations have hampered the production of terephthalic aldehyde. For instance, the Chinese government has passed the Air Pollution Prevention Action Plan to crackdown pollution, this has deeply affected the production of terephthalic aldehyde in the region. Since China is its main producer and supplier, such developments in the country have flustered the market all across the globe.

The global terephthalic aldehyde market has been segmented into: