Future Market Insights (FMI) has projected the ammonium thiosulfate market to expand at a robust CAGR of 6.8% through 2031. Driven by rising demand from diverse end-use industries such as agriculture and agrochemical industries, the market will reach US$ 367,590.1 Thousand by 2031-end.

The global ammonium thiosulfate market will exhibit a year-on-year (YoY) growth of 5.4% in 2021. Regionally, North America is expected to dominate the global market, accounting for over 68.8% of market share in 2031. 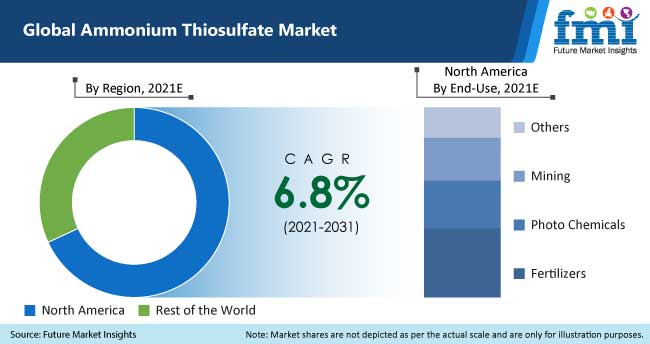 As per FMI, steady rise in the agriculture & agrochemicals sector coupled with rapid urbanization globally will drive the ammonium thiosulfate market's growth. Over the past few years, strong growth has been witnessed in the agricultural sector across the globe.

Global ammonium thiosulfate market is expected to grow further due to an increase in the packaged food demand, especially across the U.S. and India. This will result in increased demand for fertilizers to cope up with the demand for food crops production for better yields and quality of crops.

Increased government spending by various other economies, especially in India, for further agricultural development will also support the market growth during the forecast period.

Moreover, decreasing cultivation area and need to high yields per unit land area, owing to increasing urbanization and shrinking cultivation unit land sizes, will boost the demand for fertilizers in the near future.

How will Increasing Demand for Food Shape the Ammonium Thiosulfate Market?

According to Food and Agriculture Organization (FAO), world population is expected to grow by over a third, or 2.3 billion people, between 2009 and 2050, wherein urban areas will account for 70% of world population in 2050.

At the same time, per capita income in 2050 is projected to be a multiple of today’s levels. This in turn will raise multiple challenges for the agriculture industry such as producing crops for increasing population with shrinking rural labor force and slower rate of crop yield.

Inorganic compounds such as ammonium thiosulfate could be used to meet these challenges and at the same time cater to the rising food demand. As it is soluble in water, ammonium thiosulfate provides a yield increase on crops due to its composition of 26% sulfur and act as a favorable return of investment for farmers.

How will Government Initiatives and Subsidies Fuel Market Growth?

Government across the globe aims to reduce the usage of pesticides, trying to increase support towards production of harmless fertilizers, which can increase the productivity of the soil.

For instance, government in the Netherland support program GENEOG aims at identifying effective products and assists in funding for registration, as well as helps in increasing grower knowledge for sustainable crop protection products.

What Is the Impact of COVID-19 on Ammonium Thiosulfate Market?

The global economy witnessed a significant downfall due to the sudden outbreak of COVID-19. Global shutdown halted trade activities, resulting in disruption of supply-chain network. Industrial sector, mining sector and construction sector suffered the most.

However, agricultural sector showed a stable trajectory during the pandemic, as it falls under essential services category and agricultural produce being categorized as critical commodities, thus exempting them from restrictions.

How Big is the Opportunity for Ammonium Thiosulfate Market in India?

Increased government investments in the Indian agriculture sector is one of the main factors supporting the market growth. One of the key driver propelling the use of ammonium thiosulfate is the lower current market penetration rates and growing awareness of sustainable farming methods.

Agriculture sector accounts for the major chunk of India’s economy. As country’s largest work force is dedicated to the agriculture sector, adoption of ammonium thiosulfate is expected to double with increasing crop production.

Furthermore, increasing use of nitrogenous fertilizers and rising food production in the country will create lucrative growth opportunities for ammonium thiosulfate manufacturers.

Why is Demand for Ammonium Thiosulfate Increasing in the U.S.?

In 2021, the U.S. ammonium thiosulfate market is expected to grow by 4.7% year-on-year, contributing over 93% of market share in North America.

Due to presence of leading companies in the region, the U.S. is projected to account for more than 60% of worldwide production and consumption, which in turn is set to drive the growth of ammonium thiosulfate market.

Increasing consumption of ammonium thiosulfate in the U.S. as a fertilizer due to its wide array of benefits such as its nitrification inhibitor properties and increased soil fertility will spur the sales.

Increasing production of corn and soya crops in U.S. will result in increased adoption of ammonium thiosulfate, accelerating the demand.

China is expected to be the key consumer of ammonium thiosulfate and will account for 84.6% of market share in 2021.

Manufacturers in the country have a competitive advantage as they have access to cutting edge technologies and researches to address the unmet challenges. Additionally, they are constantly investing in research & development activities to expand product lines and develop efficient fertilizers and pesticides.

How is the Market of Ammonium Thiosulfate Flourishing in Germany?

Germany is expected to account for around 30.4% of the global ammonium thiosulfate sales. Germany and France are major agricultural producers across Europe and holds considerable market share.

Key factors such as rising demand for water soluble macro nutrient fertilizers, compatibility of ammonium and thiosulfate fertilizer with various crop protection agents, and the wide range of uses for these products, results in high demand for ammonium thiosulfate in the country, boosting market growth.

Also, key manufacturers in the country are aiming to extend their business through major capacity expansions. For instance, In October 2020, TIB Chemicals launched into operation newly built storage tanks for TIB THIO ATS (Ammonium Thiosulfate), which has contributed to the safekeeping of large quantities of the chemical.

Why is the Demand for Liquid Form in Ammonium Thiosulfate Continuously Rising?

Liquid form type is witnessing a considerable growth in the global market. Liquid form segment is expected to account for over 76.9% of the global volume consumption in East Asia.

Liquid form type is the top choice due to its blending nature. Based on its diverse characteristic such as fertilizer, herbicide safener, bleaching agent, and reducing agent, liquid form will witness high demand.

How will Application of Ammonium Thiosulfate as Fertilizer Spur Sales?

Revenues in the fertilizer segment are expected to grow at 4.6%CAGR in 2021. Demand of mining segment is expected to increase at 4.6% between 2020 and 2021, according to FMI.

Which Grade Type will Lead the Market Growth?

The industrial grade segment is estimated to account for around 97.0% in the North America owing to increasing application in agriculture, pharmaceutical, mining and metallurgical industries.

As a nitrification inhibitor ammonium thiosulfate prevents ammonium (NH4) from being converted to nitrate and is also a sulphur source that aids in improving crop yields and quality. These characteristics are expected to fuel the demand for industrial grade ammonium thiosulfate.

Companies operating in ammonium thiosulfate market are aiming at strategic collaborations and strategic partnerships with other manufacturers to expand their product manufacturing and address the demand of an expanding patient pool.

Key players are also expanding their production capacities by establishing new production units, especially in the U.S. and Europe.