Modern day smartphones and tablet computers are largely touchscreen centric. The touchscreen is the most important component of these devices and is probably the most prone to damage as well. While manufacturers do tend to use some kind of toughened glass to prevent the screen from shattering, customers show a preference for additional protection as a kind of safety net.

This has led to an increasing demand for screen guards to protect the screens of high-end devices like the iPhone and iPad. This factor is driving the increased adoption of screen guards in the global Apple accessories market. iPhone Screen Guards and iPad Screen Guards are anticipated to be the most lucrative segments of the global Apple accessories market.

The iPhone alone accounts for approximately 2/3rd of the revenue of Apple Inc. and the company has been referred to several times as the ‘iPhone company’. The iPhone is often the only pocket computer, camera, calculator, MP3 player, or GPS that people carry with them as it has effectively replaced all of these devices. The iPhone is both extremely expensive and quite fragile and this is quite a lethal combination as even a single drop could potentially shatter the delicate touchscreen.

Many people have had the misfortune of either a shattered or cracked iPhone screen at least once in their lifetime. With all these factors in mind, it is not surprising that the iPhone Screen Guard is anticipated to hold the largest chunk of the Apple accessories market throughout the forecast period (2016-2020).

Decline in BPS, but still clinging to leadership position

A predicted incremental dollar opportunity of a little more than $210 Million during the period 2016 - 2020 implies there is good opportunity for companies involved in the Apple accessories market to profit handsomely if they create a screen guard to protect this critical component of the iPhone. 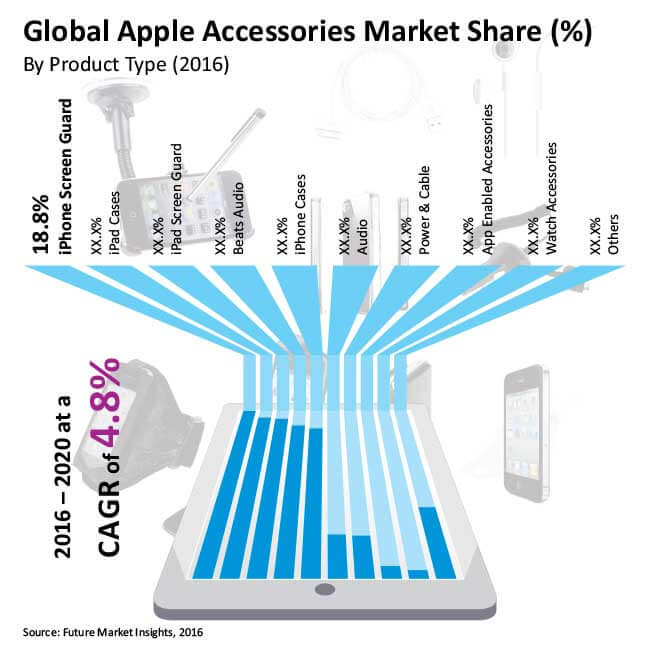 The iPad Screen Guard segment accounted for just over $1 Billion in 2015 and it is likely to witness a Y-o-Y growth of 2.5%. At the end of the forecast period, the value of the iPad Screen Guard segment is anticipated to be close to $1.2 Billion, recording a CAGR of 2.4%. This represents an incremental dollar opportunity of more than $100 Million during the four year period; something that the key stakeholders operating in the global Apple accessories market need to watch closely.