Blue light protection ingredients have come to the spotlight as discussions around ‘digital aging’ gain steam. The health impact of excessive smartphone and laptop usage have been well-documented – from skin damage to sleep disorders, research has pointed out the dangers of constant exposure to blue light. Ingredient manufacturers, suppliers, and health & wellness companies have sensed the opportunity, as blue light protection becomes a key consumer concern. Of particular significance has been the launch of anti-blue light facial skincare products in the form of serums, facial gels, primers, and foundations.

Demand for blue light protection ingredients has grown significantly in the past, owing to growing awareness among consumers. According to FMI, the market value has increased at 5.9% CAGR between 2015 and 2019.

According to the report published by the European Commission, Europe is one of the most lucrative markets for the cosmetics industry. The guidelines regarding the safety and sustainability of the cosmetics by the European Union have further aided in the growth of the market during the last five years.

While countries in Europe such as France, Italy, UK, Germany, and Spain have witnessed steady demand for these ingredients, markets in Asia have also been key to growth.

In Japan, the Pharmaceutical Affairs Law was established on August 10, 1960 where Japan has adopted a positive list of UV filters and preservatives. The regulations like this has positively impacted the sales footprint of the blue light protection ingredients manufacturers over the past decade.

Globally, awareness on blue light protection has increased significantly. During the assessment period 2020-2030, more consumers are likely to gain awareness, and subsequently, invest in protection products. Based on a combination of myriad, yet interconnected developments, Future Market Insights (FMI), in its new study, opines global sales of blue light protection ingredients to grow at over 8% annually through 2030.

Growing body of research has warned consumers about the health impact of excessive phone/laptop usage. According to the European Commission (EC) Survey 2019, more than 90% of young people use mobile phones to access the internet, while 52% use portable computers to access the internet away from home to work. According to the National Center for Biotechnology Information (NCBI), long-term exposure to blue lights can cause extrinsic skin aging. The blue-lights emitted from the sun and electronic devices can damage DNA and can cause the death of skin cells.

Similarly, a new report published by the National Institute of Aging in December, 2020 has given a thorough analysis of the causes, and prevention of the age spots, wrinkles, skin cancer, and others. Further, according to the National Center for Biotechnology Information (NCBI), high energy short wave blue light between 415 nm and 455 nm is the most harmful for human eyes and skin, while blue lights of any wavelength can cause skin damage if exposed to it for long.

The blue-light from electronics devices can cause damage to the skin cells including cell shrinkage, and death of the cells. Exposure to blue lights from the sun and electronic devices such as smartphones, laptops, and other gadgets affect the skin resulting in premature aging, wrinkles, dryness, and other skin problems.

According to NCBI, nearly 85 million Americans were seen by a physician for at least 1 skin disease in 2013 including the skin diseases caused from blue rays and UV rays, while mortality was noted in half of the 24 skin disease categories. Rising prevalence of skin diseases on account of excessive screen time continues to be a key factor driving demand for ingredients used in manufacturing blue light protection products.

Various initiatives and campaigns spreading awareness regarding the skin-related problems and their solutions, are working in favor of the growth of the market. For instance, the American Academy of Dermatology (AAD) Association has launched their Skin Awareness Campaign in November, 2020.

The incorporation of blue-light protection ingredients in the skin care and cosmetic products makes them costlier. In many cost-sensitive markets, consumer spending on cosmetics is limited to hygiene and ‘make-up’ products. Although awareness is growing, in many markets, it has not nudged the consumer to take the next step and actually buy the product.

Furthermore, the outbreak of novel coronavirus has influenced consumer purchasing patterns, with products such as sanitizers, hand wash, masks, shields becoming priority, and cosmetics products being put on the backburner. However, the market is recovering slowly and steadily and expected to grow exponentially throughout the forecast period. 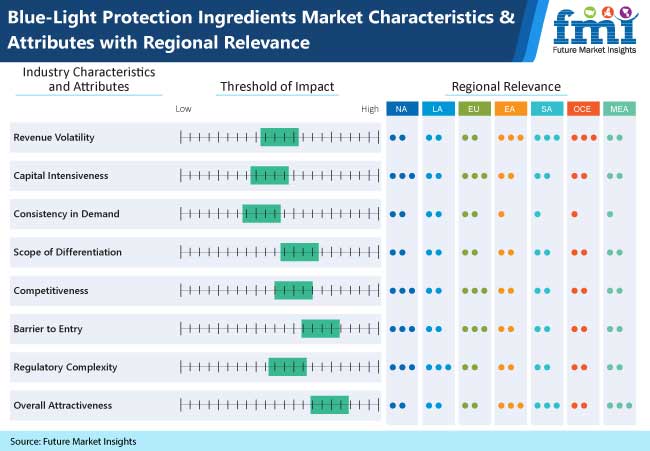 The cosmetics industry in Germany spends nearly 5% of their annual turnover on R&D. Unsurprisingly, Germany has led from the front in terms of product innovation, formulation, packaging techniques, and marketing of blue light protection products. Ingredient manufacturers and suppliers have had greater access to opportunities in Germany, and it remains a key target market for many players.

Why Consolidation in US is Key?

Being the epicenter of the North American market -- which is the second largest market of blue-light protection ingredients globally -- the United States remains highly lucrative. According to the American Academy of Dermatology (AAD), skin cancer is the most common cancer in the United States - More than 2 people die of skin cancer in the U.S. every hour, as per data from Skin Cancer Organization.

Awareness regarding the hazards of blue light is higher in the US as compared to many countries. To cater to consumer demand, a number of players have a strong presence in the country. These players have tie-ups with ingredient manufacturers/suppliers, but as new players make a foray, the opportunities are likely to increase.

Italy is among the top three markets for blue protection ingredients, in terms of total revenues. The rising prevalence of various skin diseases including skin cancers continues to be a key influencing factor for consumers.

According to the World Cancer Research Fund (WCRF), the age-standardized rates of skin cancer per 100,000 men and women in Italy are 14.0 and 11.0 respectively.

How Big is the Opportunity in France?

According to the studies by the French Federation of Beauty Companies (FEBEA), the French cosmetics industry spends nearly 2% of its annual turnover in Research & Development (R&D) activities. This is likely to further boost the adoption rate of the blue-light protection ingredients by the manufacturers.

Furthermore, the increasing rates of skin diseases is propelling the growth in France, due to the rise in adoption of precautionary measures. According to a report published by NCBI (National Center for Biotechnology Information) in 2018, 59% of the population in France believed to have a sensitive skin, while more than 60% of the people aged less than 35 years claimed to have sensitive skin.

The data reveals the importance of adoption of precautionary care for skins and hence the consumption of blue-light protection ingredients has been grown dramatically in the country over the past decade. FMI states that this trend is likely to persist in the coming years to fuel the sales further.

The increasing number of skin diseases such as skin allergies, infections, cancer, and others have been a major point of concern in the United Kingdom over the past decade. According to the Primary Care Dermatology Society (PCDS), more than 50% of the U.K. population experience a skin condition in a given twelve month period. As stated by PCDS, the quality of life of people with skin disease such as psoriasis, atopic eczema, and others can be significantly impaired and such impairment can be greater at times than for life-threatening conditions such as cancers. This has a significant impact on the demand for skincare and cosmetics products in the U.K.

The highly developed skincare and cosmetics industry in the U.K. has further fueled the sales of the blue-light protection ingredients in the U.K. According to the Cosmetic, Toiletry, and Perfumery Association (CTPA) of United Kingdom, the skincare and color cosmetics segments hold respectively 23.1% and 14.7% share of the U.K cosmetics, toiletry, and perfumery industry, while the whole industry was worth more than EUR 9000 million in 2019.

Backed by the steadily growing consumer focus on the skincare and precautionary measures for skin, the U.K. blue-light protection ingredients market is set to gain momentum through 2030.

China remains an important market, not only in terms of consumption, but also from production perspective. The increasing number of manufacturing units coupled with a rapidly expanding cosmetics industry is bolstering the growth in China.

According to the National Bureau of Statistics of China (NBS), retail sales of cosmetics in China are consistently growing at a double-digit rate. Furthermore, the increasing awareness to protect skin from the risks of various skin diseases is creating opportunities. According to the data published by the World Health Organization (WHO) in 2018, skin disease deaths in China reached 0.08% of total deaths, while the prevalence of the allergic skin diseases, dermatitis, dry skin diseases, and others have been increasing steadily since the past decade. This is working as a catalyst to the rising demand for the blue-light ingredients in China.

As per the report named “Japanese Skin Care Cluster” published by the Institute for Strategy and Competitiveness (ISC), the skin care industry in Japan has been flourished on the large domestic economy, while Japan’s health and beauty sub-cluster ranked 13th in the world in 2011.  Being one of the world’s leading industries for cosmetic products, Japan cosmetics industry is dominated by the skincare cosmetics products. This is resulting in rise in requirement for blue-light protection ingredients in the manufacturing of skincare and cosmetic products.

Solid/semi-solid blue-light protection ingredients are currently leading in the global market in terms of form. As this type of ingredients are more convenient in producing the skin care and cosmetic products such as blue-light protection body lotion, cream, and others due to having less complex process cycle, they are preferred by cosmetics companies.

The high antioxidant and UVB absorption properties of the conventional ingredients are among other key factors for steady demand. However, the fact that organic ingredients are safer is not lost on consumers. In the last couple of years, sales of organic blue light protection ingredients has grown at a brisk pace, creating space of new entrants in this market.

Demand from the facial skin care products category, which broadly includes creams, serums, and moisturizers, continues to be a key revenue channel for ingredient manufactures. Demand for facial skin care is significantly higher than other skin care products, which explains why ingredient manufacturers are consolidating their positon in this segment. According to FMI’s analysis, demand for facial skincare category will account for nearly 40% of all demand for blue light protection ingredients.