Bridge bearings, as considered under the scope of the bridge bearing report, are mechanical parts of a bridge structure that act as a supporting surface between a deck and bridge pier or beam. Its prime motive is to allow controlled movement in case of seismic or similar forces by eliminating the stress involved. Bridge bearings are available in various designs, such as elastomeric, pot, spherical, sliding plate, disc, roller, spherical and others. Further, bridge bearings are either made from steel or rubber or a combination of materials.

The construction industry has witnessed significant investments in recent times. For instance, in FY2017, it is estimated that the spending on infrastructural construction was around US$ 3 Tn. Hence, expanding construction investments by PPP (Public Private Partnerships) and regional governments are stipulated to register healthy growth in case of transport infrastructure and thus, subsequently augment the trade of bridge bearings. Further, the transport infrastructure industry has witnessed sustained incremental growth over the years, which can be attributed to favorable economic conditions in numerous developing and developed countries.

The bridge bearing market is anticipated to witness accelerated and lateral growth due to the ongoing large public infrastructural projects, which, in turn, are anticipated to create public-private partnership (PPP) opportunities over the forecast period. Furthermore, travel and tourism is another factor reinforcing the demand for bridge bearings. It is expected that the travel and tourism sector will hold significant share in total global investments and it is further estimated that this share will increase over the forecast period.

Growing tourism will attract significant foreign direct investments in tourism-driven countries, such as the Middle East Asia, which will subsequently lead to launching of several hospitality-related infrastructural projects in these countries. Moreover, regional government spending is expected to increase in support of general tourism activity in these countries. This will further drive the growth of the transport industry globally, subsequently increasing the demand for bridge bearings over the forecast period.

Low cost associated with the installation of elastomeric bridge bearings and better performance against seismic forces are the prime reasons responsible for the growth of the elastomeric bridge bearing segment. Further, on the basis of region, China, Western Europe and North America are expected to hold notable shares throughput the projected period as these regions have prominent number of manufacturers of bridge bearings. Collectively, by the end of the forecast period, Latin America, the Middle East Asia and Japan are anticipated to account for over 20% of the bridge bearing market share. 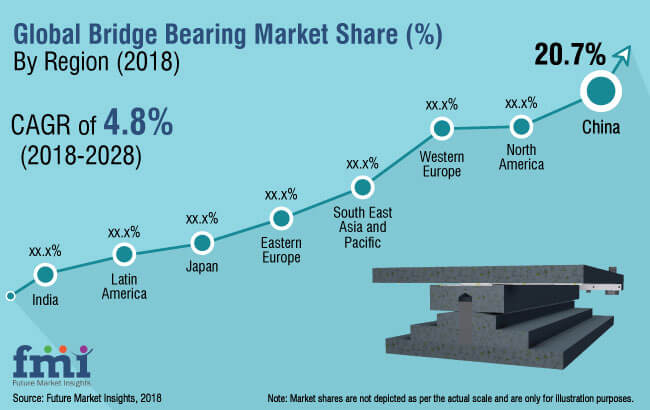 On the basis of material type, the global bridge bearings market is segmented into:

On the basis of design type, the global bridge bearings market is segmented into:

on the basis of regions, the global bridge bearings market is segmented into: