Future Market Insights (FMI) forecasts that the bridge expansion joints sales will accelerate at 1.5x in next ten years, reaching the market valuation of around US$1500 Mn by the end of 2031.

Implementation of bridge preservation partnership programs between original equipment manufacturers (OEMs) and end users will drive the market, yielding a year-on-year (YoY) growth rate of 3% in 2021.

China leads the global bridge expansion joints market as a result of growing investments in transportation and infrastructure development. The market in China is anticipated to hold nearly one-fifth value share in the global market during the forecast period.

Growing population, rising number of vehicles and increasing spending on infrastructural activities across both developed and developing countries are some of the factors driving bridge expansion joints market.

Technological advancements have led to the development of flexible, cost-effective, long-lasting, waterproof and noise reduction bridge expansion joints which can accommodate movements in all directions, of overhead structures with minimum load transmission to decks or slabs. 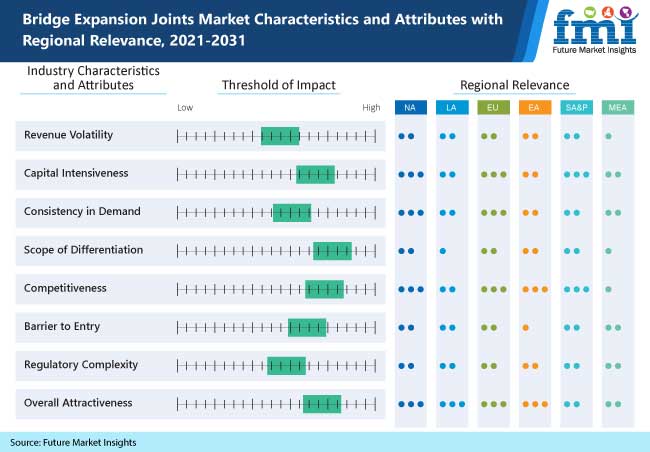 Key companies operating in the market are investing heavily in research and development activities. They are striving towards testing new products & technologies. Product launches and product approvals, mergers and acquisitions, advanced product development, alliances and collaborations are some of the strategies employed by these companies to gain a competitive edge in the market.

For instance, in 2020 Watson Bowman Acme(WBA) bridge sector team secured significant long term expansion joint work on what is being called “The Mother of all highway construction projects” in Miami, Florida. WBA will be supplying over 4,000 LF of Wabo®SiliconeSeal and 3,000 LF of Wabo®StripSeal.

Bridge expansion joints, also known as movement joints, are the components in bridges that allow the bridge to expand and contract with respect to temperature changes. They also allow continuous traffic between structures while accommodating shrinkage, temperature variation and movement on steel, composite and reinforced & pre stressed concrete structures. Bridge expansion joints can be categorized into open joints and closed joints.

Closed bridge expansion joints find extensive usage where movement ranges greater than or equal to 2.5 inch. This usage characteristic makes them preferable for use primarily in roadway bridge applications.

Growing transportation infrastructure spending across the developed and developing economics surges the demand of bridge expansion joints over the forecast period.

The Roadway Bridges Segment is slated to exhibit Above-Average Growth

Amongst all the applications analyzed in the global bridge expansion joints market study, the roadway bridges segment is expected to hold a dominant share throughout the forecast period. The segment is estimated to register about 1.02X of the overall growth in terms of value.

Increasing bridge construction activities across developed and developing economics are expected to offer new growth opportunities for the manufacturers of bridge expansion joints across the globe.

Increasing government initiatives to develop smart cities, coupled with growing investments in transportation and infrastructure development in the region, are expected to drive the growth in demand for bridge expansion joints.

The construction industry still accounts for a major share of China’s GDP. China alone is building over one-fourth of all the infrastructure worldwide and thus, consumes and produces a major share of construction aggregates, materials and components globally. This will further surge the demand for bridge expansion joints over the forecast period.

Established transportation and railway sectors in the region along with increasing industrialization and urbanization are slated to provide a firm platform for growth in the bridge expansion joints market.

The Middle East & Africa (MEA) region is expected to register 1.3X growth in the global bridge expansion joints market, followed by Latin America, South East Asia (SEA) & Pacific and China in terms of value. SEA & Pacific and Latin America are anticipated to gain traction in the latter half of forecast period in the global bridge expansion joints market, owing to anticipated increase in construction activities in respective regions.

Apart from North America, Western Europe and Japan, all other regions are expected to gain market value share by the end of the forecast period. Collectively, the Middle East & Africa and Latin America are projected to register a CAGR of 14.8% by value, which is 2.1X less than the collective growth of all other regions.

The global bridge expansion joints market is segmented on the basis of type, application and region.